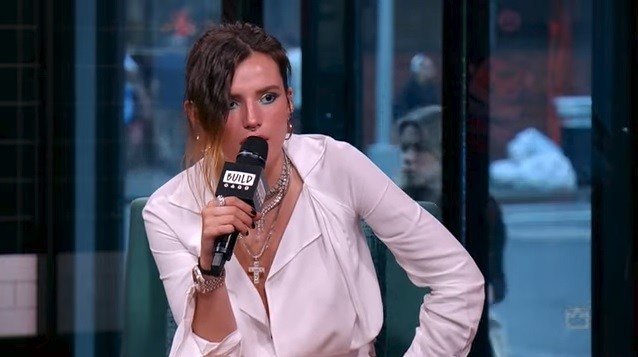 More claims coming out of Hollywood of child sexual abuse. This time from former Disney star Bella Thorne, who claims she was molested from ages 6 to 14 and that there were numerous people who knew and saw it taking place but refused to act.

The former Shake it Up actress made her claims in an interview with BUILD, where she talked about her new book The Life of a Wannabe Mogul: Mental Disarray.

Thorne also discussed transitioning out of being a Disney child star into an adult in the entertainment industry.

While she claims the transition was “tough,” Thorne also claims that people will think it was easy after reading her book.

“If you read the book you’ll be like, ‘Haha transitioning from Disney to this was f**king easy.’ I don’t know,” Thorne said.

“Getting molested, for f**king, from when you’re six to your 14, seems like way harder circumstances,” she continued. “You’re being physically abused all the time. Seems like a much more difficult situation than f**king having paparazzi following you since you were 12.”

Thorne didn’t name any of her alleged abusers, but claimed it was difficult to have paparazzi following her for pictures but completely unaware of what she was going through.

“I was still being molested when paparazzi were still f**king following me,” she said.

She also added that it was difficult to watch people around her watching what was going on and doing nothing about it.

“So, it’s pretty hard in my mind to think of these big flashlight photographs, and everyone thinking they know me and talking about me, but having no idea the type of mistreatment that I was still dealing with at that time — that everyone around me saw and did nothing,” she said.

“So, I don’t know, you tell me what’s so hard,” Thorne added. “Because that to me is way harder than any of this other sh*t I deal with on a daily basis.”

Ok, I don’t have much respect for women who are grown and years later make these kinds of claims, but I can understand how children are threatened into silence.

For years, Hollywood has been exposed by actors and actresses, who when they were children were abused, and later grew up to call out the pedophilia in the industry.

Among those are actor Elijah Wood of Frodo fame in the Lord of the Rings series. He exposed rampant pedophilia in Hollywood several years ago, claiming that organized Hollywood elites were engaging in pedophile parties.

What Wood was talking about is the rampant sexual abuse of childhood actors which has been previously exposed by Corey Feldman, as well as Corey Haim. In an episode of their reality TV show, The Two Coreys, a candid fight broke out during which Haim claimed Feldman stood by and watched as a person Feldman “still hangs out with” and is “best friends with” proceeded to “rape” the 14-year-old Haim.

With the recent arrest, charges and claims of molestation by Smallville actress Allison Mack in the NXIVM sex cult ring, my guess is that Mack was probably groomed as a child to be involved in that.

As is the case with abusers and homosexuals, many of them were abused as children and grew up to engage in the abuse themselves.

Thorne is apparently the latest to come forward, but what is actually being done about this?