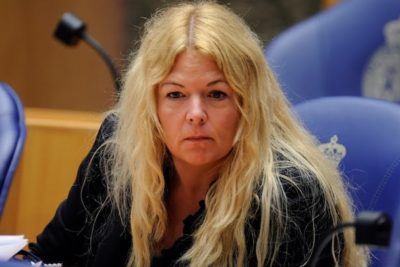 Just another sad, shocking example of the savagery unleashed in the West. Where are the wailing feminists? If Willie Dille had not been a member of the Freedom Party, the party of Geert Wilders, and if she had not been raped by Muslims, there would be an international outcry. But there will be little to no notice of this, as Europe continues on the path to its own suicide.

Dutch councilor, commits suicide after stating she was gang-raped by gang of Muslims

Islam Critic, City councilor & member of Geert Wilders Freedom Party PVV, Willie Dille, took her own life after posting this video on Facebook saying she was gang-raped by Muslims to silence her pic.twitter.com/RUpv6jOoxw

“Former far-right Dutch MP who promoted ‘dropping a nuclear bomb on Muslims’ kills herself hours after posting a video claiming she was raped by a gang who asked her ‘Do you respect Allah?,’” by Connor Boyd, Mailonline, August 10, 2018:

A Dutch MP has killed herself hours after posting a video on social media claiming she was gang-raped by a group of Muslim men.

Willie Dille, 53, a member of the anti-immigrant Freedom Party, shared the footage on Facebook in which she said she’d been attacked by the group as part of an intimidation campaign.

Dille, who served as an MP from 2010-2012 before returning to her seat on The Hague city council, alleged the rape happened over a year ago.

In the distressing video, Dille said: ‘I just want the world to know the truth. On 15th March 2017 I was kidnapped, raped and abused by a group of Muslims because they wanted to keep my mouth shut in the city council of The Hague.

The video was removed shortly after it was posted online.

Dille was branded a racist after sharing a video in February 2016 saying a nuclear bomb should be dropped on Muslims.

Her death was confirmed by local Freedom Party leader Karen Gerbrands who said Dille ‘could no longer bear what had happened to her’.

Mayor of The Hague Pauline Krikke said she was shocked when she learned about Dille’s suicide.

A police spokesperson told local media on Thursday afternoon that Dille had approached the police about the alleged attack but never filed a formal complaint….