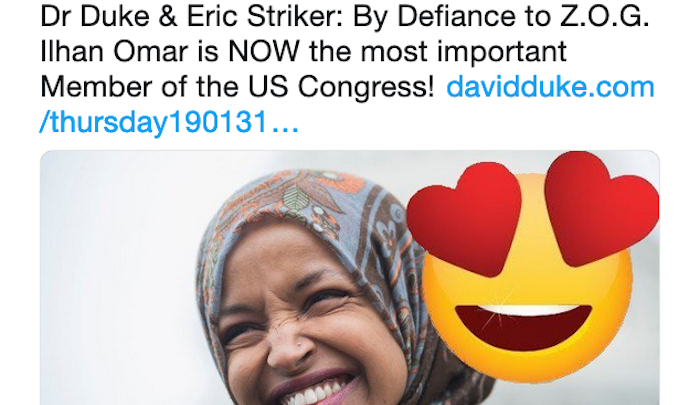 The enemedia was relentless in demanding that President Trump disavow David Duke. President Trump has proven to be the most pro-Israel President since the founding of the modern State of Israel. Will the enemedia now demand that top Democrats disavow Duke? Not a chance, despite the fact that the left’s Jew-hatred is increasingly flagrant and unapologetic. By capitulating to Ilhan Omar, the Democrats have now normalized and mainstreamed Jew-hatred, and we will be seeing a great deal more of it from their ranks — not just from Omar but from Rashida Tlaib, Alexandria Ocasio-Cortez, and others.

David Duke posted a photo of Ilhan Omar to his Twitter account on Thursday with a “heart eyes emoji,” showing his love for her after her recent comments disparaging Jews and Israel.

“By Defiance to Z.O.G. [Zionist Occupation Government] Ilhan Omar is NOW the most important Member of the US Congress!” David Duke said in a Twitter caption linking to his blog post.

Now Ilhan Omar has the full endorsement of David Duke — will the media hound Nancy Pelosi and Ilhan Omar relentlessly and ask them to disavow David Duke like they did to Trump?