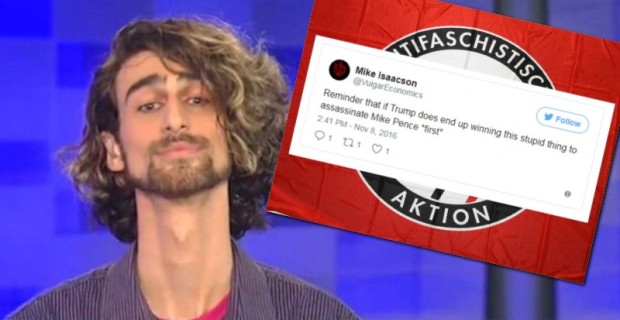 The founder of the ‘Smash Racism DC’ group that harassed Senator Ted Cruz and his wife in a restaurant Monday night is Antifa professor Mike Isaacson, who previously tweeted about teaching “future dead cops” and assassinating Mike Pence.

A mob of angry leftists forced Cruz and his wife to leave the restaurant in DC last night before the video of their confrontation went viral.

The group then vowed to target other Republicans, tweeting, “You are not safe. We will find you….We will take from you the peace you have taken from so many others.

As the Hill reported in a September 2017 article entitled Antifa activists say violence is necessary, one of the founders of ‘Smash Racism DC’ is Mike Isaacson.

It is not known whether Isaacson still has any involvement with the group.

Isaacson worked in the economics department at the CUNY Manhattan college and was placed on administrative leave last year after he tweeted, “Some of ya’ll might think it sucks being an anti-fascist teaching at John Jay College but I think it’s a privilege to teach future dead cops.”

The leftist mob that confronted @tedcruz and his family and that is now threatening them is lead by the former @JohnJayCollege Prof., Mike Isaacson, who has openly advocated for violence against his political enemies.

Isaacson previously tweeted his desire to “Kill all white people born before 1962.”

On the day of the presidential election, Isaacson tweeted, “Reminder that if Trump does end up winning this stupid thing to assassinate Mike Pence *first*.” The tweet has not been deleted and remains active.

The leader of the antifa goup that confronted @TedCruz and his family previously called for the assassination of Mike Pence on his @Twitter account.

In February, Isaacson wrote a macabre poem in which he asserts, “One day Donald Trump Will hang by his toes.”

In June 2017, Isaacson told his followers to “Kill cops first”.

Just one day after the July 2016 murder of five police officers in Dallas, Isaacson tweeted, “Off the pigs.”

Here he is encouraging people to, “Kill your local politicians before they kill you.”

Kill your local politicians before they kill you https://t.co/JiEKuTNWy6

Perhaps attempting to distance himself from the fallout of the Cruz harassment, Isaacson made no reference to it on his Twitter feed last night.

While numerous tweets posted by the ‘Smash Racism DC’ group clearly violate Twitter’s rules, including the doxxing of Gavin McInnes, Twitter has taken no action as of this afternoon.

Infowars is the most censored broadcast in the west. Please support us by downloading the Infowars app before its banned!