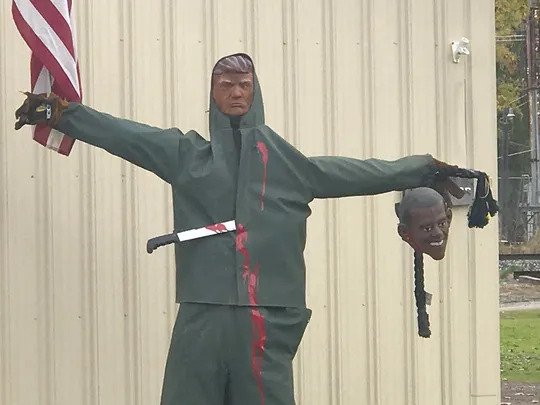 Fowlerville, Michigan residents went bat **** crazy when a local auto shop displayed a figure of Trump holding Obama’s head at the end of a noose (the owner said it was supposed to be Obama’s spinal cord).

They didn’t seem to worry about the bloody machete sticking out of President Trump’s chest as part of the same display.

(Note: As I begin to write this, I have suddenly lost the access to the page at Detroit Free Press. So I am using The Wayback Machine in place of the original article. I am not sure if the hiccup is intentional, if they are editing, if the post has now been removed, or if the site is down, but we still have a copy of what they published on Monday and updated on Tuesday. NOTE 2: Detroit Free Press is back up Wednesday Morning 10-30=19, but I will leave the links to the alternate site, just in case.)

Here’s a picture of the original HALLOWEEN display that sent snowflakes into a panic.

What you don’t see in the picture is Hillary’s appearance, but I will let The Detroit Free Press have the privilege of unveiling that surprise.

Here are the gory details from FREEP:

FOWLERVILLE — A Livingston County auto shop’s Halloween decorations that depicted President Donald Trump holding former President Barack Obama’s head by a rope has drawn outrage from dozens of people who turned to social media to denounce the display as racist.

Quality Coatings owner Dave Huff has since altered the Trump scarecrow that stands outside his business on Carr Street in Fowlerville, about 10 miles west of Howell. Huff hadn’t expected backlash to the decorations because he said he’s not racist and “no race ever went into this thing.”

“It was a Halloween decoration that I guess went too far,” he told the Detroit Free Press on Sunday.

The original display, which he put up three weeks ago, showed a Trump scarecrow holding a black rope with an Obama mask attached to it. Some who criticized the display have said that the rope looked like a noose. Huff said it was meant to represent a spine and a move from the game Mortal Kombat.

It also depicted the Trump scarecrow with his foot on Hillary Clinton’s head.

Huff changed the scarecrow Friday, removing the rope and the Obama mask and adding yellow tape that reads, “PC-POLICE.”

Resident Kathy DeTroyer drew attention to the decorations Thursday in a Facebook post that said, in part, “I am disgusted this is in my hometown. Way to display your ignorance. Democrat or Republican this is just wrong.”

Huff said a village employee contacted him Friday morning to let him know about the Facebook comments.

The village is running a scarecrow decorating competition, but Quality Coatings was not registered.

As of Sunday afternoon, the business had received more than 40 negative Facebook reviews from people referencing the Halloween decorations, with many blasting the display as racist, violent and in poor taste.

If that doesn’t work, this article is permanently archived at Wayback Machine…

All that can really be said here is WAHHHHHH!

Did I spell that correctly?

Once again, why is there no outrage over what looks to be a bloody machete sticking from The Donald’s chest?

Is this really how low the left has sank?

They have been treading water for decades but now it seems like they’ve descended past the bottom of the ocean floor and straight into the depths of hell.

Now the left has come to hate art it would seem.

Finally I agree with them on something.

Now let’s get rid of their artsy fartsy stuff. Shall we?

There is a big difference between being taxpayer funded and being the product of a private business, by the way.

None of our tax dollars financed the display at that Michigan business.

Seriously people, we have free speech and freedom of expression in this country.

How is a taxpayer funded seminar about killing whitey OK and a simple Halloween display, in which Trump is bleeding out as well, not OK?

I say they can both stay so long as I am free to express my opinion about it.

My first opinion would be that I don’t want my tax dollars financing that crap, but other than that you can talk about killing whitey until you are blue in the face.

I don’t have to agree with what you say or how you express yourself.

But you damn well have a right to make your voice heard.

I just don’t want to finance it and that should be my right as well.

That’s how it works in America!

Say what you want.

If I don’t like it, I will let you know.

On a side note, as I finish up The Detroit Free Press article is still down.

Looks like I got there just in time. Remember it is permanently archived here.