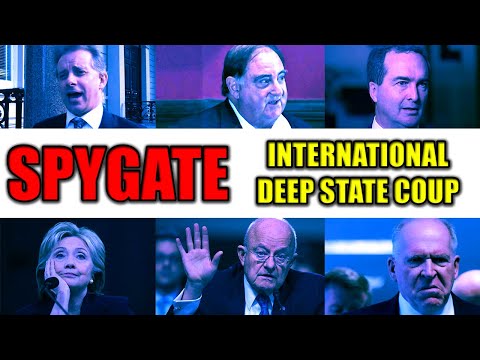 It’s a well-known and given in the United States, if not globally, that there are the Deep State and Shadow Government which “pull the strings” regarding manufactured skullduggery about perpetual wars and other DC swamp issues, including pedophilia.

However, there’s an apparent underground international “Deep State” centered in the United Kingdom British intelligence, which has weaponized a deep, stinky rabbit hole agenda being hyped and pumped to make certain President Trump will be a “one time president,” if they can convince the world!

A recent 2 hour explanatory video uncovering and exposing the international Deep State and British intelligence involvement to manufacture “RussiaGate” implicates most of the U.S. operatives, including Bob Mueller, all who are trying “to get” Trump because Trump is a duly elected and sitting U.S. president, and an apparent “rogue politician” opposing the New World Order agenda, now being promoted by NeoDemocrats, Leftists, Banksters, who are focusing criminal immigration activity to fracture the USA into a possible second civil war regarding law and order regarding immigration.

Everything you thought you knew from the U.S. mainstream, lamestream media is totally debunked in the above video, which I encourage readers to watch and also take notes.

The truth shall set you free!

Catherine J Frompovich (website) is a retired natural nutritionist who earned advanced degrees in Nutrition and Holistic Health Sciences, Certification in Orthomolecular Theory and Practice, plus Paralegal Studies. Her work has been published in national and airline magazines since the early 1980s. Catherine authored numerous books on health issues along with co-authoring papers and monographs with physicians, nurses, and holistic healthcare professionals. She has been a consumer health ​issues researcher ​​and holistic health advocate since the late 1970s; she continues researching and writing in retirement. Her career in holistic healthcare began in the early 1970s when she had to save, and restructure, her life resulting from having “fallen through the allopathic medical paradigm cracks.”

Catherine has written numerous books. The following can be purchased on Amazon books:

Eat To Beat Disease, Foods Medicinal Qualities (2016)
Vaccination Voodoo, What YOU Don’t Know About Vaccines (2013)
A Cancer Answer, Holistic BREAST Cancer Management, A Guide to Effective & Non-Toxic Treatments(2012)
Our Chemical Lives And The Hijacking Of Our DNA, A Probe Into What’s Probably Making Us Sick (2009)
Lord, How Can I Make It Through Grieving My Loss, An Inspirational Guide Through the Grieving Process(2008)