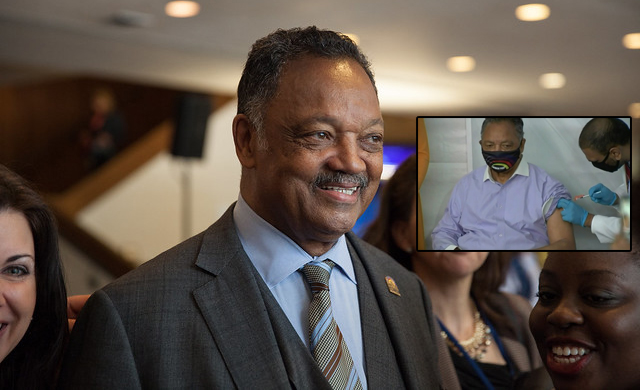 Double-jabbed activist Jesse Jackson has been hospitalized in Chicago along with his wife after testing positive for covid-19.

Jesse Jackson, 79, is vaccinated against the virus and received his first dose in January during a publicized event as he urged others to receive the inoculation as soon as possible. He and his wife, 77, are being treated at Northwestern Memorial Hospital in Chicago.

“Doctors are currently monitoring the condition of both,” according to the statement from Jesse Jackson’s nonprofit, the Rainbow/PUSH Coalition.

“There are no further updates at this time,” the statement said. “We will provide updates as they become available.”

Jackson took his first shot of Pfizers’ experimental mRNA injection on January 8th and had his followers repeat after him, “Take the vaccination, now!”

Pfizer claimed back in December that their shots were around 95% effective at preventing covid infections but data out of Israel released in July showed that number is now down to 39%.

The Biden regime is now pushing everyone to take a third “booster” shot despite zero clinical trials being completed on their effectiveness and the first round of trials showing the second shot had far more severe side effects than the first.