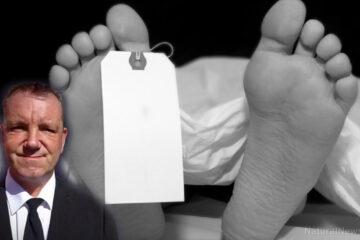 An undertaker was recently interviewed by journalist Lindie Naughton and he devulged that when the COVID injections began in 2020, deaths jumped 250%, but you never have heard that in the Mockingbird, corporate-owned media or from lying, drug pimping politicians did you?

In this compelling video a British funeral undertaker speaks to an independent journalist giving first-hand testimony revealing what has really been happening with the dead from care homes and hospitals.

Undertaker, John O’Looney talks of the lies and shenanigans spun by corrupt politicians and media to brainwash the public into believing there exists a ‘deadly virus’. Lindie Naughton interviews this candid funeral director to learn that due to medication given during the pandemic “Deaths jumped 250 percent when injections began.”

“As part of my work I visit hospitals routinely. During the pandemic I got to speak to many medical staff. We all understood we were being lied to and this was fraud,” says O’Looney.

The undertaker explains it is routine that when collecting the dead for burial/cremation they keep a mortuary register (a kind of ‘guest book’) this shows a record of any usual events. The undertakers explains that he saw, during the pandemic, unusual patterns of high deaths at care homes where the vast majority deaths were known by staff not to be from COVID19 but more likely due to the medication given to the elderly.

“Terminal cancer patients are routinely being recorded as COVID deaths.”

To many independent analysts there appears to be a correlation between the supposed new variants and vaccine breakthrough cases. New variants are suspected to be nothing of the sort and are actually adverse reactions to the experimental jabs.

Any and all deaths are glibly and dishonestly (and likely criminally, too!) being certified as from “COVID” and such “variants” and this is masking what some observers believe is mass genocide.

As Ethan Huff reminds us, “The plandemic is really just mass genocide in disguise.”

The same thing is being observed with “delta” and the other new “variants” that are supposedly spreading like wildfire throughout the population. Elderly people, upon receiving the experimental chemical injections they are calling “vaccines,” are dying in record numbers.

Any death that occurs in the age of the Wuhan Flu, it turns out, is automatically labeled a “covid” death, especially when it occurs in an old person. This is an easy way for the medical fascists to pad the numbers and make it seem like we are in the throes of a “pandemic.”

According to O’Looney and others who work in his industry, the “pandemic” is actually a deliberate mass genocide. People are dying, he says, because someone else wants them to die and is killing them with drugs.

It’s long past time that we brought justice upon the heads of the wicked men in Big Pharma, their drug hustlers in DC and the media and complicit nurses and doctors who have failed to provide informed consent to their patients and the public as prescribed by law, ultimately killing or injuring tens of thousands of people this year alone!