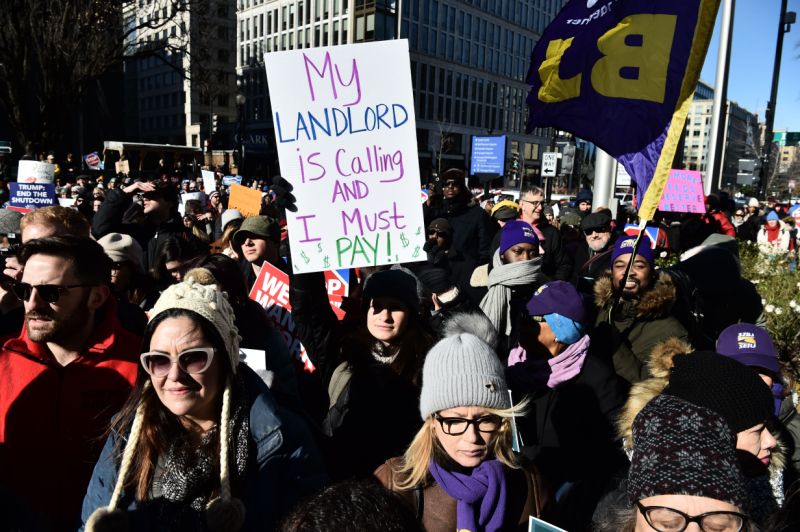 Whether its CNBC, or The New York Times, or NPR, the mainstream media is clearly committed to using the current partial government shutdown to portray federal workers as beleaguered victims of the American political system.

But, in all cases I’ve encountered, these reports neglect to mention that on average, civilian federal workers make 17 percent more than similar workers in the private sector, according to a 2017-2018 report by the Congressional Budget Office. That’s total compensation, so we’re including both wages and benefits.

Considering that a year is 52 weeks long, an average federal worker would need to be completely without any income for nearly 9 weeks in order to just be reduced to equal standing with a similar private-sector worker. (17 percent of 52 weeks is 8.84 weeks.)

As of this writing, the current shutdown has only lasted three weeks, which means all those furloughed workers profiled in national news stories are likely still coming out ahead of their private-sector colleagues. Moreover, given that both Trump and Congress have committed to pay furloughed workers back pay, it’s a safe bet that federal workers will continue to enjoy a healthy advantage over private-sector workers when it comes to compensation.

Health benefits for most federal workers will also continue without interruption through the shutdown, as noted by NPR.

The Federal-Pay Advantage Is Larger for Lower-Income Employees

The disparity between private-sector work and federal jobs is largest at the lower end of the education scale.

According to the CBO’s report:

Federal civilian workers with no more than a high school education earned 34 percent more, on average, than similar workers in the private sector.

Average benefits were 93 percent higher for federal employees with no more than a high school education than for their private-sector counterparts.

So, most federal employees — especially the ones with less education — have a long way to go before facing the economic realities that private-sector employees — i.e., the net taxpayers — face on a daily basis.

Not content with manufacturing sympathy for federal workers, however, news organizations have also pointed to a decline in spending by federal employees as damaging to the economy.

A typical passage is one like this one from a CNBC article:

If the government shutdown lasts another two weeks, the total cost to the U.S. economy would exceed the price of building the proposed border wall.

We estimated that this shutdown could shave approximately $1.2 billion off real GDP in the quarter for each week that part of the government is closed.

That might sound like a big number (to some people unfamiliar with federal finances), but it’s helpful to keep in mind that federal workers make up only 1.5 percent of the federal workforce. And not all of those are furloughed.

Moreover, since furloughed workers can eventually expect back pay, any bust in GDP right now will be followed by a boom in spending once the back pay is received.

The real cost to the private sector is in the form of industries that are paralyzed as a result of understaffed federal regulatory agencies. (As mentioned in this article about craft beer.) When the private sector isn’t allowed to function without regular certification and inspection from federal agents, that means shutdowns prevent the private sector from functioning. This, of course, isn’t an argument for more government spending. It’s an argument against a vast federal regulatory apparatus that can’t be counted on to perform the bare minimum of tasks it has promised to perform.

All of this is just a good reminder that these jobs should never have been federal jobs in the first place. After all, many of these positions are already by definition “non-essential,” and from the national parks to the airports to the FBI, the federal workers are doing jobs that could easily be taken over by state and local authorities, or by the private sector.

Were that the case, no nationwide, system-wide shutdown all of countless nationwide agencies would be of any noticeable impact. The system would become less fragile, more flexible, more diverse, and less costly.

Ultimately, all of the problems we’re being told about as a result of the government shutdown are problems caused by a federal government itself, which has inserted itself into every nearly every corner of daily life nationwide.