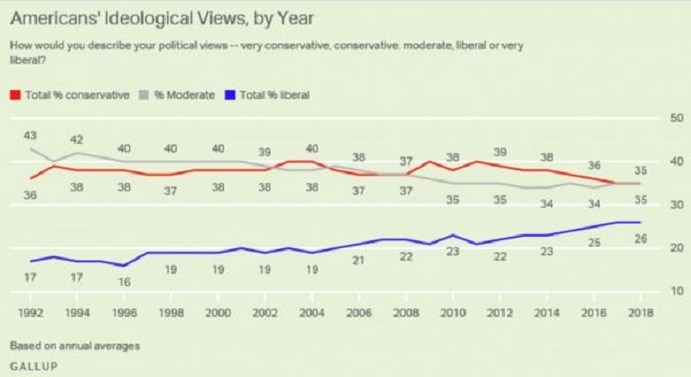 Why do conservatives feel so marginalized and besieged when we actually outnumber liberals?

In response to Gallup’s question, “How would you describe your political views — very conservative, conservative, moderate, liberal or very liberal?”:

Americans are also more polarized, with fewer identifying themselves as moderates. Gallup says:

Americans’ assessment of their political ideology was unchanged in 2018 compared with the year prior. Although conservatives continue to outnumber liberals, the gap in conservatives’ favor has narrowed from 19 percentage points in Gallup’s 1992 baseline measurement to nine points each of the past two years. Since 1992, the percentage of Americans identifying as liberal has risen from 17% then to 26% today. This has been mostly offset by a shrinking percentage of moderates, from 43% to 35%. Meanwhile, from 1993 to 2016 the percentage conservative was consistently between 36% and 40%, before dipping to 35% in 2017 and holding at that level in 2018….