Wouldn’t you like to have been a fly on the wall when this conversation happened between a Mom and her Councilman Son?

Mom meets with gay son to share her opinions.

Cops show up and take Mom’s side.

It seems like not all is well in Chula Vista, CA as citizens stand against Drag Queen Story Hour while their representatives continue to push it. 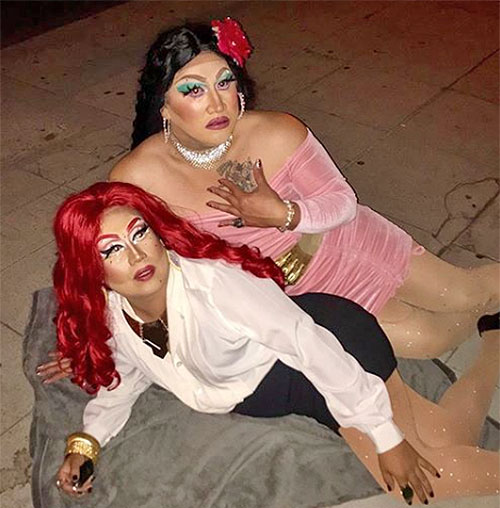 These two men were reading to children in the Chula Vista “Drag Queen” library event.

Since then a large number of parents have testified at City Council meetings and have leafletted the town. They want the City Council to keep these kinds of things from happening in the public library. But the 5-member Council arrogantly refuses to even bring it up for discussion.

Instead, City Councilor Stephen Padilla, an out “gay,” has waged a campaign against the parents. He has insulted them during Council meetings. He calls them haters and religious fanatics. He even led a repulsive anti-Christian “counter-protest” against parents who protested outside the library. (Interestingly, Padilla used to be married to a woman and they have a child, according to local residents.) 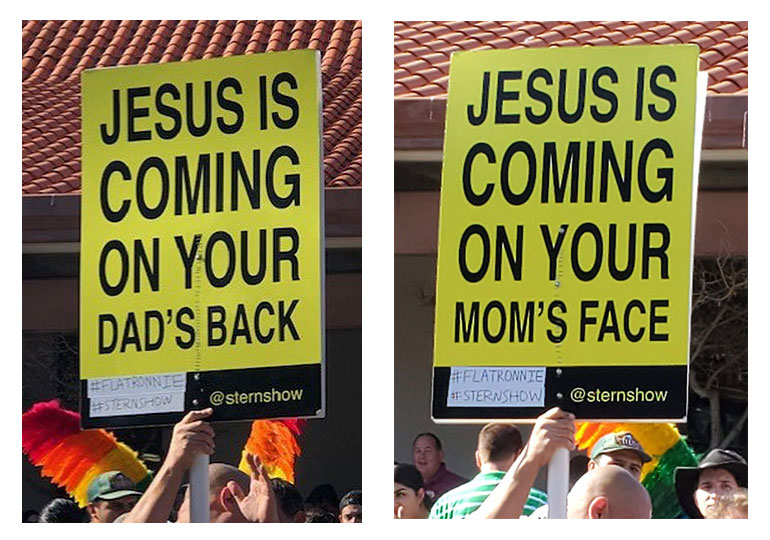 On the day of the Drag Queen event, LGBT activists gathered to harass the parents who were protesting. Here are two of the repulsive, bigoted signs from the LGBT “counter protest” — that Padilla (as well as Chula Vista Mayor Mary Salas) were also part of.
City Councilman Steve Padilla (in foreground with megaphone) not only supported the LGBT mob and its anti-Christian bigotry, but got up in front and led them on.

Padilla’s hate knows no bounds. He called our San Diego MassResistance chapter a “white supremacist” group — even though two-thirds of the members are non-white and the leader is Filipino!.

Surprisingly, this past week Stephen Padilla, who had refused to meet with anyone, agreed to meet with Lorena in his City Hall office. She came, and calmly told him the truth about the Drag Queen Story event. His behavior toward her was disgraceful. He ultimately threw her out of his office and tried to have her removed from City Hall.

Lorena’s experience is a view into why Drag Queen events and so many other horrible programs are allowed in our schools and libraries. It is a window into the anger and irrational thinking of many public officials on the LGBT issue, and “progressivism” in general. And it demonstrates that we must never be afraid to tell the truth – because the truth is what will really jar these people.

Here’s what Lorena told us:

I came into his office. Councilman Padilla was there with his assistant Tony.

I started out our meeting by telling Councilman Padilla: “I am here to ask you: Why do you support Drag Queen Story Hour? Why did you side with the LGBT protesters? And why were you so aggressive towards the people who don’t support it?”

He refused to answer that question. Instead, he brought up the lie that MassResistance is a “hate group.” He started to lecture me, treating me like I was ignorant. He asked me, “Have you heard of the Department of Justice? Have you heard of the Southern Poverty Law Center?”

What kind of question is that?! I answered, “Yes I have heard of those groups. You know that they (the Southern Poverty Law Center) call Christian groups “hate groups” because they oppose the LGBT Agenda.”

But Steve Padilla fired back, “That’s not true.” He tried to argue that they are a civil rights group. I countered: “No, it is true. I saw it on their own website!” Anyone can see that they’re the ones who are a hate group.

Steve Padilla told me, “I have not seen those videos.” I told him to watch those videos, and that he would see that these two men are not good to be around children. I told him, “Kids can go on the Internet. They can look up the Drag Queens they saw at our library, and they will find those videos. Do you think those videos are good for kids to see?”

[NOTE: You can see those videos here and here.]

Padilla tried to blow me off: “The kids didn’t see the videos in their performance in the library. They didn’t do anything wrong.”

I fired back: “You are just closing your eyes! You don’t want to see. This is not OK for kids. Drag Queen Story Hour is still wrong!”

Then Padilla said, “Just because you have religious objections, it doesn’t mean we have to stop the program.” He claimed that it was the minority of religious people in the city who didn’t like the program.

I then asked him: “Why were you siding with people who had those disgusting anti-Christian signs? Why did you side with them?” Is this the love and tolerance that you want to bring to Chula Vista? Or is it intolerance to people like me that want to speak the truth?

“But you were happy to side with them!”

Padilla tried to deny it, but I told him, “I saw you addressing the crowd, very happy, and leading the crowd around the library before going into the parking lot. You were very happy, very excited. You took sides with them. Why?”

I insisted that the city pass an ordinance to make sure that Drag Queen Story Hour never comes back, but he arrogantly declared, “That will never happen!”

“So, you are going to have future drag queen story hours?”

Over and over, he tried to tell me that Drag Queen Story Hour was accepted everywhere except Chula Vista. That is simply a lie, but he would not allow me to correct him. In fact this program has created much controversy and met with lots of protests in other parts of the country.

Then I told him this: “Let’s finish with this. Drag Queen Story Hour is a step towards legalizing pedophilia, and you are part of it!”

At this point, Councilman Padilla stood up, got really angry, with a disgusted face. “What are you saying? You are going too far. Let me educate you …”

But I didn’t stop there.

“Since the 1970s, there’ve been organizations like NAMBLA …” and I told him about the Ted Talks on YouTube, and there classes at San Diego State University which talk about pedophilia as another sexual orientation.

Padilla got really upset with me. He even told me that I needed mental help! He didn’t want to listen. I didn’t care.

“One more thing,” I said. “In 100 years, it won’t matter what your political gains are. You will be standing before God …” but by then, he stormed out of his office.

They threatened to call the police, but I stood my ground and asked them: “And what are they going to do? Take me to jail?”

Francisco answered: “They will escort you out.”

To be honest with you, this was scary for me! I had a right to be in City Hall. I said to them, “This is the government we have? This is tyranny!” Finally, I agreed to leave. But before I left I stopped to speak with Councilman Mike Diaz, who was in his City Hall office.

The police did eventually arrive. At first, they asked Councilman Diaz: “Is there anyone in your office that you want to remove?” I told them that they were there because of me, because of Councilman Padilla calling them to remove me.

I told the police the simple truth, why Padilla had called them to have me removed: “The fact is that Steve Padilla did not like what I said to him!” And I told the police specifically what Padilla didn’t like, which is that I mentioned the connection between Drag Queen Story Hour and pedophilia.

By that point, the police were clearly on my side. They understand that it was not right for Councilman Padilla to call the police on me just because I said something that he did not like. And they left without bothering me.

Now this is how you confront elected officials!

Notice that Lorena did not back down from her clear objections to the Drag Queen Story Hour program.

Read it all at Mass Resistance…

So the police showed up and decided that no crime had been committed.

This is his mother.

If it isn’t already there, Drag Queen Story Hour is headed for your library too.

Not that there is anything wrong with Drag Queens flashing their sexuality to a bunch of prepubescent children.

It’s so trendy that even a columnist at National Review supports it.

How fair and balanced of you David French.

Make no mistake America, Drag Queen Story Hour follows an agenda and the ending is not good.

It is not a blessing of liberty.

It is a curse of tyranny.