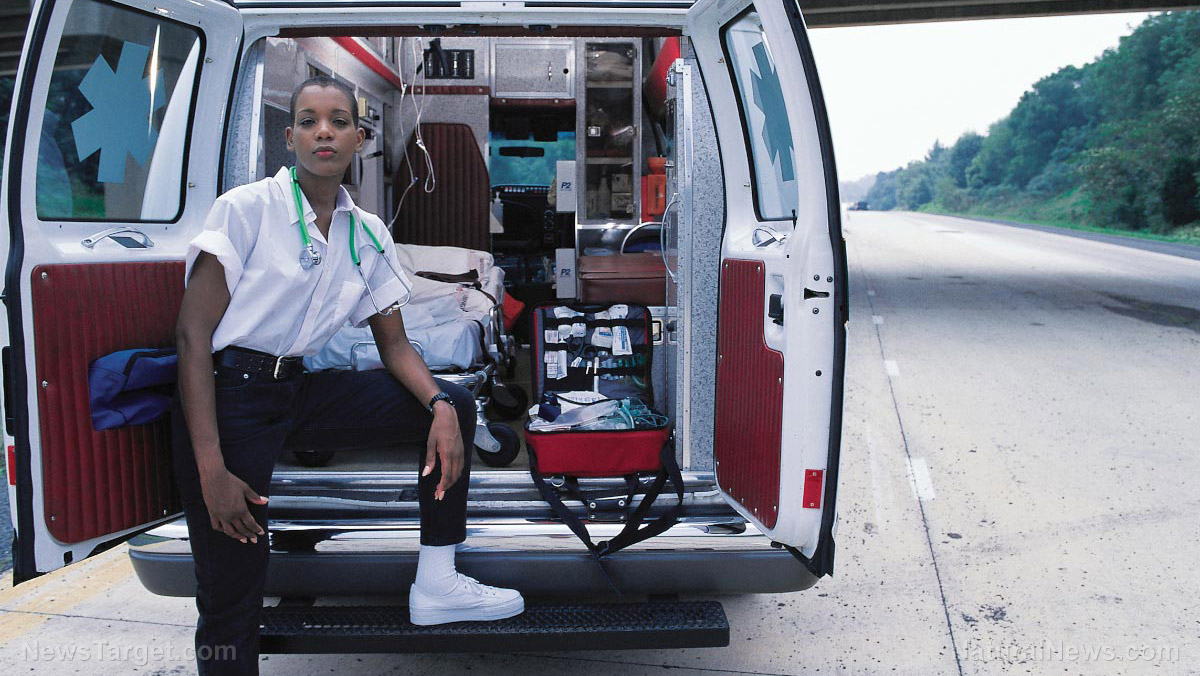 (Natural News) If you’re an investigative journalist, the first piece of evidence you search for after a sensationalized crime is blasted all over the news is video footage, the ultimate “witness.” So, even though video footage of George Floyd getting “kneed to death” was available, nowhere to be found was a police body cam, and there were 4 cops on that immediate scene the whole time. Very odd right?… especially after we saw the Atlanta Wendy’s cop cam footage from that shooting was released right from the start.

Now, the body cam footage and transcripts from the George Floyd incident are out, and the truth about the way everything really went down is making its way to the surface fast, after being buried by fake news and months of riots that the insane Left calls “peaceful protests.” Was it ALL staged?

Did the cops already know Floyd was dying? Why didn’t the emergency medical staff test Floyd’s vital signs at all, before slinging him onto a stretcher and tossing him in the back of the ambulance? Maybe because he had overdosed on fentanyl and was dying before Derek Chauvin ever put a knee on the back of his neck. In other words, death was imminent for Floyd anyway.

Let’s take an inside look at the ultimate whistle-blower in this “crime of the century” – transcripts of those videos from the body cams worn by two of the 4 cops at the scene of George Floyd’s fentanyl overdose, where Floyd admits on video, before he ever got thrown to the ground, that he can’t breathe, while he’s foaming at the mouth from an overdose of one of the most dangerous drugs on Earth, and the most dangerous illegal drug in America.

That’s why the media won’t show this footage or release these transcripts from the cop cams, ever. Floyd admits to the police during the arrest that he has shoved some Fentanyl up his anus earlier, and that might be how he’s overdosing, if it broke open.

Journalism is about seeking the truth, not believing conspiracy theories or parroting some “official narrative”

Yes, the body cam tells a completely different story than what has been “reported” by mainstream media, Black Lives Matter, and every supporter of the fake race war being staged in America right now. This is like having the missing video from the “plane” that supposedly hit the Pentagon on September 11th, 2001. This cop cam video footage is like having the security footage at Sandy Hook Elementary, the day some teenager supposedly shot up a whole school full of kids, but the new security system somehow never captured anything, and nothing was ever released.

Wait, did you forget to ask about the cop body cams, or even think of it? Most people who are not investigative journalists get so overwhelmed by all the other “coverage” that they don’t even think to ask. Well, we’re asking. That’s why, before you ever even start believing or stressing out about some mainstream news scary event, always ask for the video coverage. All of it. If it’s not available, you know the story is FAKE, like bad crisis actors and plastic trees.

Did you know that Fentanyl is 50 times more potent than heroin, and 100 times more potent than morphine, according to the DEA? It kills more Americans each year than automobile crashes. That’s because Fentanyl is a synthetic opioid that crosses the blood-brain barrier and binds immediately to opioid receptors, taking effect almost instantaneously. It only takes a little bit of Fentanyl to overdose any human, and that’s why George Floyd was complaining he couldn’t breathe BEFORE he ever got taken down to the ground by the police officers.

Sure, you can kill someone by putting your knee on the back of their neck for minutes on end while they’re face down on the ground, but police body cams reveal there’s a whole lot more to this “story,” and when the truth comes out, it always stings.

Wooden Chest Syndrome occurs when someone takes in Fentanyl intravenously, and the person’s chest and abdomen muscles tighten so rigidly that even CPR is rendered useless for saving the person.

Is that why the paramedics did NOT even try CPR on Floyd, because they somehow already knew he had overdosed on Fentanyl, and resuscitation efforts wouldn’t even matter?

Transcripts from videos from two Minneapolis police officers (not Chauvin) at the George Floyd death scene had their body cams rolling the whole time, and now the truth is out. Yes, these cameras caught everything, from before Floyd exited his vehicle until his lifeless, overdosed body arrived at the hospital.

Officers Thomas Lane and his partner, J. Alexander Keung, are heard, along with Floyd, discussing his counterfeit $20 bill and the fact that Floyd describes how he was suffering respiratory distress before the cops ever laid a hand on him. This should be alarming to all Americans.

While trying to coax Floyd out of his vehicle, he was acting quite disoriented and not rational at all. This was the first sign that he was overdosing on the world’s most dangerous drug. He was not “cooperative” as mainstream media, the Left, and BLM would have us all believe. Floyd admits to using counterfeit money, then begins foaming at the mouth like a dog with rabies. When the officers notice all of this, Floyd tells them that he was “hooping” earlier, which means hiding drugs by inserting them in your rectum, usually in some kind of plastic wrapping. Floyd’s drug-induced paranoia began as those deadly drugs broke open and flooded his blood and brain.

On page 22 of the video transcript, Floyd says he can’t breathe. He’s still standing at this point, and literally asks the cops to put him on the ground. The autopsy report reveals he did in fact have Fentanyl in his blood. It’s quite clear now what happened to George Floyd. That’s why you always ask for all the videos, especially body cams.

Tune your internet dial to NewsTarget.com for updates on how Black Lives Matter is leading the staged hate crime movement to turn this country over to Communist rule.

Last question: Could actual paramedics have saved George Floyd’s life with the anecdotal drug for Fentanyl called Narcan? There’s a reason why the crisis actors shoved Floyd into the ambulance without checking his vital signs. Keep digging.

Take a look at a typical Fentanyl overdose victim here and what actual EMT’s do at a scene before tossing a body into an ambulance that was seemingly alive just moments before they arrive.