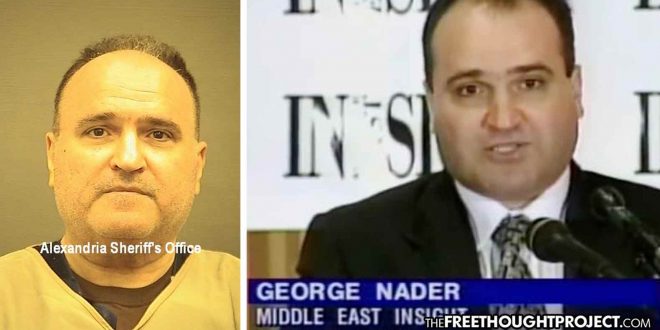 ALEXANDRIA, Va. (CN) — Once an informal adviser to President Donald Trump and later a witness for the Mueller probe, George Nader was sentenced to 10 years in prison Friday for possession of child pornography and transporting a minor into the United States for sex.

The 61-year-old Lebanese-American businessman appeared in U.S. District Court for the Eastern District of Virginia this afternoon, donning a faded prison jumpsuit and a black mask that covered much of his face.

Nader pleaded guilty in March, less than a year after federal prosecutors charged him over graphic images found on multiple devices belonging to Nader, including videos of toddler-age boys engaging in sex acts with young goats and other farm animals.

Prosecutors added the sex-trafficking charge in July, saying Nader had arranged in 2000 to transport a 14-year-old boy from the Czech Republic to his home in Washington, D.C. Holding onto the minor’s passport, Nader had told the teen and his mother that they would go to prison if they tried to report him.

Two decades later, Nader’s victim is married with a young son and lives in the Czech Republic. His name was not revealed in court Friday as he teleconferenced into Nader’s sentencing hearing to read a roughly four-minute statement.

“It’s been a long journey,” the man said in Czech, his testimony read back to the court through an interpreter. “My health is bad. I have ulcers. I stopped eating. I had nightmares. I am still dealing with those now.”

Saying he “hated himself” and was ashamed, Nader’s victim said that, since becoming a father, he is plagued by fear that someone could do to his child what was done to him.

Jay Prabhu, an assistant U.S. attorney and chief of his office’s Cybercrime Unit, told the court Friday that Nader is a repeat offender but that the minimum sentence of 10 years was enough punishment for Nader, given his past cooperation with prosecutors and his promise to compensate the victim.

Nader previously served six months in prison in 1991 after he was convicted of transporting child pornography in the United States.

His skin pallid and voice quiet in court Friday, Nader recited a 2-page statement while standing behind a plastic partition that was installed as a safety measure against the novel coronavirus.

“I’m so sorry to all involved and here today,” Nader said. “There is nothing else I can say. The last year has been the most difficult of my life.”

Nader’s only family are miles away. His sister lives in Lebanon, and his brother in California. Because of the pandemic, he has been unable to see them. He emphasized Friday how difficult that has been.

“It’s been very painful for me,” he said. “I’ve listened to what’s been said about me, and I can say I’m deeply sorry for the pain I’ve caused. I am deeply and sincerely sorry for my actions. … I hope you are able to see my true effort to stay on the correct path. Please believe me when I say there will never be a need for me to appear before another court ever again.”

According to his testimony before a grand jury during former special counsel Robert Mueller’s probe of Russian interference in the 2016 election, Nader was tapped by Trump’s first presidential campaign team to offer his diplomatic and political insights into the Middle East.

Nader’s professional relationships with power players there, like Sheikh Mohammed bin Zayed al-Nahyan, the United Arab Emirates crown prince, was seen as a boon by the Trump transition team. Nader was eventually able to secure a Trump Tower meeting in December 2016 with the crown prince, President Trump’s son-in-law Jared Kushner and the campaign’s chief strategist at the time, Steve Bannon.

The meeting’s focus was to convince Kushner and Bannon that, with Trump elected, America should cool its longtime alliance with Qatar, a longtime enemy of the U.A.E.

Broidy ended up receiving a $2.5 million check from Nader in April 2018 that, according to an investigative report first published by the Associated Press, resulted in the bankrolling of anti-Qatar initiatives in Congress and later, donations to lawmakers like California Republican Ed Royce, who as chairman of the House Foreign Affairs committee at the time, backed the shift in foreign policy.

Defense attorney Jonathan Jeffress told Judge Brinkema that Nader’s age and health merit consideration in sentencing. Nader is prediabetic and had a quadruple bypass just months before his arrest. When he was arrested at Dulles International Airport in 2018, he was coming to the U.S. to receive rehabilitative treatment for his heart, Jeffress said.

Given that 20 years has elapsed since Nader transported his victim, Jeffress said the potential for Nader repeating the conduct was “nonexistent.” He also said that the only fundamental disagreement between prosecutors and the defense was that Nader still exhibits a pattern or proclivity for child pornography.

“These are things Mr. Nader has largely put behind him,” Jeffress said.

Brinkema was not convinced, noting during the 2018 arrest that there were more than 50 graphic images found on Nader’s phone — images that prosecutor Prabhu said obviously depicted children sexually or “in pain.”

“I raise these issues not to embarrass Mr. Nader or shock the court. I raise it because it shows he has a persistent issue with this,” Prabhu said before also calling the former Trump campaign adviser a “persistent and dangerous voyeur for years.”

Jeffress disagreed, saying that the images shared with Nader by his cohorts in the Middle East were widely regarded as “dirty jokes.”

“It meets the definition of obscenity but it’s not child pornography that someone would use to stimulate themselves,” Jeffress said.