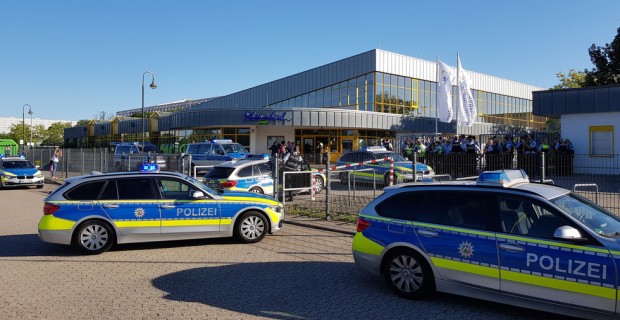 A swimming pool in the German city of Düsseldorf has been forced to introduce mandatory ID card checks in an effort to stop sexual assaults and rowdy behavior by migrant youths that has required the police to be called out on numerous occasions.

Following a crisis summit between administrators, the mayor and the police chief, an online ticket system linked to people’s IDs has been established to control who is allowed to enter the pool.

“In Rheinbad we have introduced an identity card for all visitors,” said Düsseldorf Mayor Thomas Geisel. “Those who do not comply, will not be let in. It is absolutely unacceptable and inconceivable that families who want to spend their free time here are harassed by youth gangs.”

As we reported earlier this month, the pool had to be closed twice after hundreds of male migrants harassed a family, prompting a huge police deployment.

Last Friday, the pool had to be cleared again as around 60 North African migrants began engaging in aggressive beahvior. Outnumbered, the six security guards on patrol had to call police for backup. 20 officers arrived and the pool was closed.

“It should be known, that before the migrant crisis, German swimming pools didn’t need six security guards to maintain order. It’s likely that they didn’t need any at all,” comments Voice of Europe.

It remains to be seen how authorities will prevent the kind of people who cause mayhem from using the pool. They could only really do so by barring people from North African countries, which would set off a nationwide controversy and lead to widespread accusations of racism.