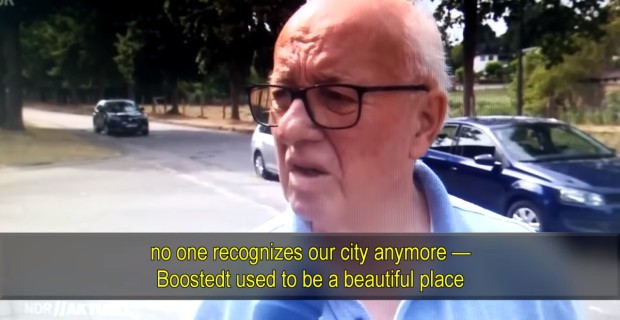 Residents of Boostedt, Germany complain that “no one recognizes our city anymore” after 1,200 migrants moved in, increasing the population by 26 per cent.

Mayor Hartmut König said that the town, which now has 4,600 inhabitants, had changed drastically since the migrants were housed at a local military barracks.

“It’s quite simply the behavior. For example, in shops things are stolen. I experienced it myself: three refugees walking on the pavement, not making enough room for a woman with a pushchair and a child coming in their direction. They make no room; she has to move onto the street to get around them,” the mayor said.

“Besides that, they leave piles of rubbish and use every available space to sit around and drink beer,” he added.

An elderly resident said that the migrants do nothing with their time and simply sit around before asserting, “No one recognizes our city anymore — Boostedt used to be a beautiful place and a nice place to live, now it is a little different and no one knows what the future holds.”

Another video shows other Germans furious at what Chancellor Angela Merkel’s policies have done to their country, with one insisting, “I will never vote for you again for the rest of my life.”

As we reported last week, a Yazidi teenager who was enslaved by the Islamic State moved back to Iraq after she met her captor on the streets of an area near Stuttgart, Germany where he had registered as a refugee.

Germany has allowed in over 1 million migrants, predominantly from the Middle East, since 2015.

Violent crime has risen since that time, and 90% of it is due to migrants, according to the German government’s own statistics.