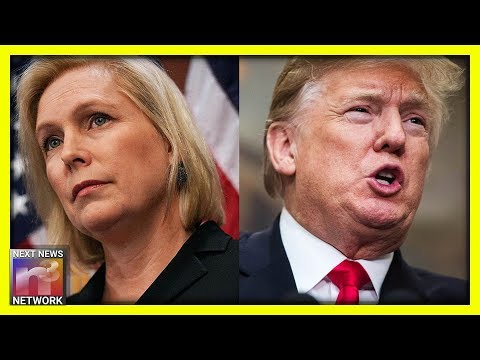 If you haven’t noticed, there is a standard theme with nearly every 2020 Democrat Presidential candidate.

They want to take YOUR Guns.

Good luck with that.

Here’s Gary with the latest Next News Network video report:

Prosecuting those who will not comply?

Hard to prosecute those who will die defending themselves.

I think that Hesston guy said something about “from my cold dead hands.”

Well, TENS OF MILLIONS of us adhere to that and we’d take out as many of you as we could before it happened Ms. Gillibrand.

Molly Prince from The Daily Wire reports, Presidential candidate Sen. Kirsten Gillibrand (D-NY) revealed on Wednesday she believes that instituting both a mandatory gun buyback program as well as criminally prosecuting American’s who refuse to hand those firearms over to the government are both “strong” ideas.

Presidential candidate Sen. Kirsten Gillibrand (D-NY) revealed on Wednesday she believes that instituting both a mandatory gun buyback program as well as criminally prosecuting American’s who refuse to hand those firearms over to the government are both “strong” ideas.

“On the assault weapons issue, you have talked openly about being in favor of an assault weapons ban. I’m interested if you are supportive of a mandatory buyback program for assault weapons,” CNN’s Poppy Harlow asked Gillibrand, noting that the proposal was also suggested by her primary challengers Rep. Eric Swalwell (D-CA) and Sen. Cory Booker (D-NJ)

“Some have gone as far as to say not only should it be a mandatory buyback of assault rifles, but there should be criminal prosecution for those who don’t sell them back,” Harlow continued. “Is that something you support?”

“I think we should ban assault weapons as well as large magazines, and as part of passing that ban, do a buyback program across the country so that those who own them can be compensated for their money that they spent,” Gillibrand replied. “But I think both of those ideas are strong.”

I don’t think we have to worry about Gillibrand becoming president, but other Dems who could win the nomination seem to be in line with her:

Since Gillibrand chose to open her mouth, I think we should look at the real evil b**ch they call Kirsten Gillibrand:

Seems like Gillibrand needs to shut her mouth and try to hide in the shadows for awhile.

Raniere might cut a deal and talk to lessen his sentence.

“Hey Raniere, we will cut your sentence if you give us Gillibrand.”

One thing that intrigues me about Gillibrand is this…

How can she be all in on the molesting of innocent victims and also be for killing the cult’s breeding stock through abortion?

It doesn’t seem to fit.