European Union sentences hundreds of millions to perpetual poverty after passing new ‘carbon emissions’ bill
In partnership with the Bollingers (The Truth About Cancer), Mike Adams and Natural News announce $50K in donations to health freedom alt media publishers, filmmakers and non-profits
Western countries are orchestrating a global food crisis while blaming Russia for it
Week in review: SCOTUS overturning Roe causes shocking display of mass mental illness and moral depravity by the Left
Millions of people are now DISABLED due to covid vaccines, data show
German lawyer Reiner Füllmich: COVID-19 vaccines were designed to experiment on the human race
VACCINE VIOLENCE: If you want to stop deaths from “shootings,” ban vaccines, not guns
51 Migrants died in sweltering tractor-trailer in San Antonio; TX governor blames Biden
Rationing Has Already Started In Europe As The Entire Globe Plunges Into A Horrific Economic Nightmare
Biden promises that your tax dollars will be used by HHS to transport women across state lines for baby killing… “abortion Uber”
Amazon buying up massive industrial land holdings across the U.S., even as it reduces warehouse square footage… what are they planning?
Covid vaccines have killed at least three-quarters of a million people in the United States so far, and the body count keeps growing
Massive meat rendering facility with robotics, AI systems and railroad offloading integration raises eyebrows
Canada’s Trudeau declares WAR against all pro-life pregnancy centers in Canada
THIS IS TOLERANCE? Christian crisis pregnancy center in Colorado vandalized, set on fire over Roe v. Wade

(Natural News) Yes, Big Pharma’s evil agenda is all hidden in plain sight. Welcome to the socio-science-fiction world of Gilead. Imagine for a moment if Hitler had all but won WWII and began his takeover of America in New England. Hitler had used chemical weapons and medical experimentation, made by his Pharma Giant I.G. Farben, to wage genocide in Europe and the world, and if he had succeeded, the Handmaid’s Tale is a well-painted “portrait” of his dystopian America-to-be, as a white supremacist, totalitarian police state that has just overthrown the US government.

Welcome to the world of Gilead, a make-believe society built on genocide and slavery, and it’s all just fiction, or is it? Did you know Gilead Sciences is a real Pharma Giant right now in America? That’s right, Gilead, spelled the same way, and as in the NAZI series Handmaid’s Tale, manufactures the kidney-decimating, predominantly prescribed “drug” Remdesivir for “COVID-19.”

The question looms: Which Gilead are we talking about now, the one that makes designer deadly drugs for COVID or the ones from the HULU series who run a NAZI-style America where the rulers execute all political dissidents in public?

Is Remdesivir a population reduction bioweapon made by Gilead Sciences to help turn America into a NAZI-style police state, just like on TV?

There are many facets of a chemical weapons program, and Hitler knew this well. He used poisonous gas to kill millions of people in gas chambers they thought were showers, and he used medical experimentation to try to design the “perfect” human race of only white people with blond hair and “superior” genetics. Today, we see weapons of mass destruction being used by Big Pharma, just as IG Farben, the pharmaceutical giant of WWII, used to destroy the “enemy” (Jews, Blacks, and anyone with a physical or mental handicap) by the millions.

One facet of the Big Pharma attack on America today involves the drugs prescribed for people who check into hospitals with vaccine-venom-syndrome, also known as the Wuhan Virus SARS-CoV-2. Millions of Americans have been jabbed with experimental vaccine toxins that clog their blood, weaken their immune system, and send them right to the poison well for “treatment” – Gilead’s Remdesivir. Today, hospitals get a bonus the sicker you get from VVS and Remdesivir.

Remdesivir may contain ingredients that worsen Vaccine-Venom-Syndrome caused by the Wuhan Flu jabs, aimed at wiping out the “weak”

After failed clinical trials, the FDA approved Remdesivir for Americans to take while dying from vaccine-induced COVID-19. Gilead Sciences also signed a billion-dollar contract with the European Union to push their monopolistic, kidney-decimating drug on Europeans. Scientists around the world were baffled because Remdesivir clinical trials showed NO IMPACT of treatment for Wuhan “virus” infection whatsoever, so how did Gilead pull this whole thing off? Clinical trials for Remdesivir were a total bust and proved the drug does NOT reduce mortality or recovery time for people dying from Wuhan Virus.

Then again, do you think there were any clinical trials for Zyklon-B, the IG-Farben-manufactured gas (insecticide) that put millions of concentration camp prisoners to death in WWII? Remember, Nobel Prizes were awarded to the makers of Zyklon B that was used in the gas chambers to kill millions of innocent people. Will Gilead Sciences win a Nobel Prize soon for kidney-decimating Remdesivir? 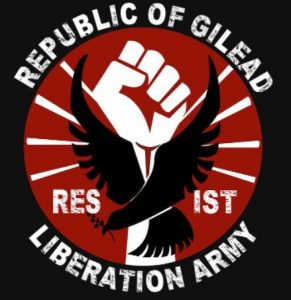 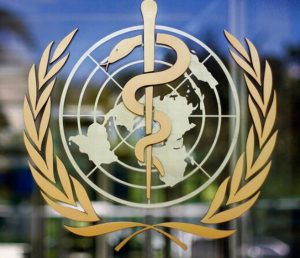 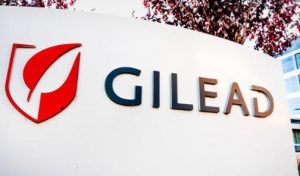 The US Constitution suspended as Republic of Gilead changes America into military dictatorship where the “Commander” is a totalitarian scientist – sound familiar?

Imagine if Anthony Fauci was President and everyone knew that COVID vaccines and Remdesivir are designed to methodically kill off the unwanted populace, who are all subservient and feeble. Fauci is the architect of “gain of function” syndrome, a population reduction bioweapon, just like the Commander in Handmaid’s Tale is a scientist with control over all women’s health and reproductive abilities.

The Republic of Gilead may be fiction in the HULU series, but in America today, if you catch Vaccine-Venom-Syndrome and go to the hospital for treatment, the new Republic of Gilead under the Fauci Regime has nearly every medical doctor in the country prescribing the new intravenously-administered drug called Remdesivir. It’s like a chemotherapy drip that nearly guarantees your kidneys fail you (labeled death by Covid).

The state-sanctioned murder of dissidents in Handmaid’s Tale by Gilead Republic is not much different than the current Biden Regime force-injecting millions of Americans with Vaccine-Venom-Peptides. Instead of Gilead stoning people to death, now the new Gilead just prescribes them to death. 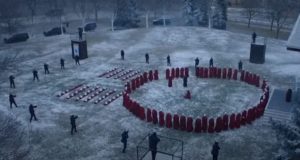 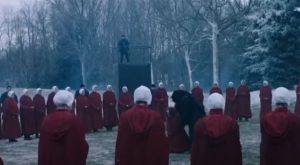 Pfizer, Moderna, Bayer, and Gilead are the I.G. Farben of yesteryear, all set to wipe out at least half of Earth’s population, and mostly political dissidents

The New World Order is no joke. It’s not a fantasy social-science series on streaming services that you just turn off when you’re done being “entertained.” Today, the NWO is attacking without firing a weapon, shooting a missile, or dropping a bomb. It’s all about pharmaceuticals and dirty jabs, and the NAZI-run pharmaceutical conglomerate from World War II, Interessen-Gemeinschaft Farbenindustrie, has a few new names.

Handmaid’s Tale scene were dissident Janine is stoned to death:

Bookmark Vaccines.news to your favorite independent websites for updates on experimental Covid “vaccines” and Gilead “medications” that are suspected of containing deadly snake venom “proteins.”