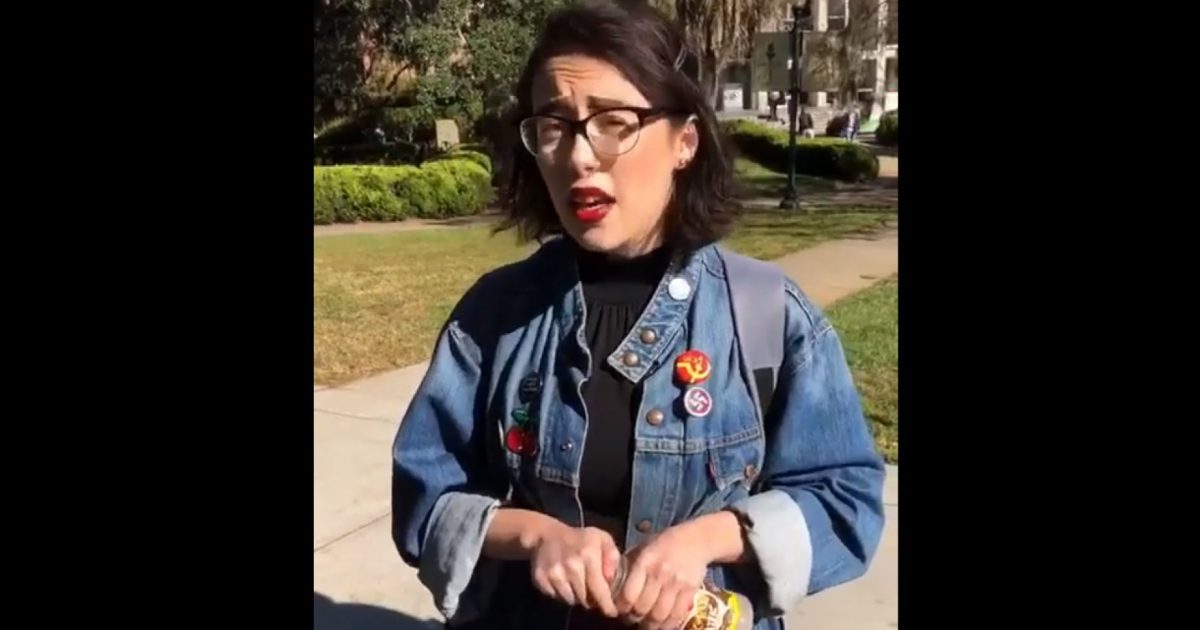 Shelby Shoup, a Communist intern for Andrew Gillum, was arrested for battery after throwing her chocolate milk on SFU College Republicans Vice-Membership Chair, Daisy Judge and another student.

Fox reported from the video:

“You are supporting Nazis,” Shoup said in the video posted online. “Do you understand that?”

Another student snapped back at the girl wearing a communist pin: “And you are supporting communism?”

“Don’t pour your coffee on me,” he said.

But Shoup replied, “F*** you. I will,” before she opened her chocolate milk and threw it on him.

Then she launched into what news reports described as a “profanity laced tirade” and blamed the college Republicans for “normalizing nazis” and blamed them for the shooting at the Pittsburgh synagogue. Then she kicked a Ron DeSantis sign out of the ground.

Shortly after her arrest, she was released on her own recognizance. She was ordered to have no contact with “anyone on campus without permission” according to Florida Politics.

She claims to have worked for Gillum for two years. So if someone this cuckoo is working for a Florida gubernatorial candidate, what does that say about the candidate? Remember his own campaign staff called him “crazy” as we previously reported.

FSU is a diverse community that values and respects each person. FSU expects each member of the community to embrace the values of civility and ethical conduct and obey the law. Regarding Tuesday's incident, the individual was identified, arrested and charged with battery.

So let’s think about this: Andrew Gillum has an intern for his campaign that openly supports communism. She’s a member of FSU Students for Justice in Palestine, so she also supports Palestinian terrorists… so her tirade over the synagogue shooting is a total fake. She obviously hasn’t bothered to crack open a history book. Stalin, Mao Zedong, Che Guevara and Fidel Castro, all of her hero Commies were murderers of millions. She’s a typical brainwashed leftist.