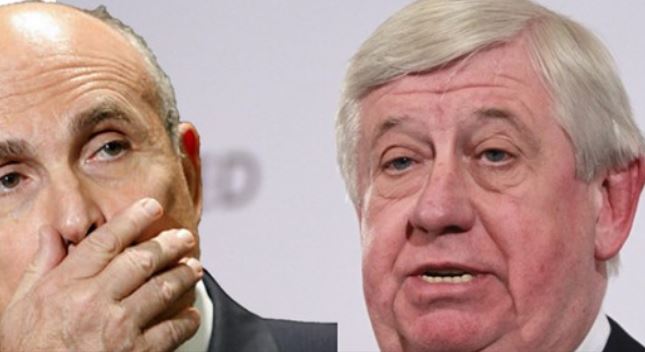 Fired due to VP Biden’s threat not to release $1B in vital US aid.

Shokin’s med records show he was poisoned, died twice, and was revived.

Lots of heads will roll in Ukraine if this opens up. pic.twitter.com/1W1OgkumXA

“Shokin’s medical records show he was poisoned, died twice, and was revived.”

Here’s my view: Shokin is the Ukainian prosecutor Viktor Shokin who was fired for investigating corruption in his home country that was coming dangerously close to implicating high-level members of the Obama administration and the Democratic National Committee.

Shokin’s firing came after a demand from then-Vice President Joe Biden to the president of Ukraine.

So who might’ve wanted Shokin silenced permanently? The answer is just about any serious stakeholders in keeping Ukraine corruption from becoming public.

That includes the Clinton and Obama political machines in addition to Ukrainians working under the Kremlin’s thumb.

Donald Trump had been president for less than three weeks when the intelligence briefings he’d been receiving led him to tell Bill O’Reilly this during an interview:

O’Reilly: Putin is a killer.

It is widely accepted that poisoning is a favorite method of Russians looking to silence their political opponents.

(Timeline.com) In Russia, assassination is both an art and a science, perfected over centuries of intrigue and ill intentions. And the national predilection is for a form of murder that is notoriously hard to trace: poison.

Both the New York Times and the Washington Post have confirmed this in recent articles.

As for the Clintons… There have long have been plenty of suspicions that they might not treat their opponents any differently than Putin has been accused of doing.

Americans were put through two-and-a-half years of a bogus Russia hoax targeting President Trump without, as we now have learned, any predicate reason except for a totally discredited dossier that was paid for by… Hillary Clinton and the DNC.

Both, if Giuliani’s allegations prove to be correct, had a lot to hide.

Funny that. It was Hillary Clinton and President Obama who escaped any serious questions when they signed off on the sale of Uranium to Russia and after agreeing to transfer military technology to the Russian equivalent of Silicon Valley in Skolkovo.

Surely, Putin appreciated these magnanimous gifts and wanted to keep that level of cooperation flowing.

There is also significant evidence that Alexandra Chalupa, a DNC operative and Ukrainian-American activist, who was paid $70,000 by the DNC during the 2016 presidential campaign, had enlisted Ukrainian officials to find (manufacture?) dirt on Trump’s campaign manager, Paul Manafort.

If not to keep their criminal involvement in Ukraine hidden, why else would Jerry Nadler (D-NY) have so feared Donald Trump’s election that he felt compelled to say this within days of the 2016 election?

Outsourcing the murder of a political opponent? Maybe not as far-fetched as trying to impeach a president over a phone call.