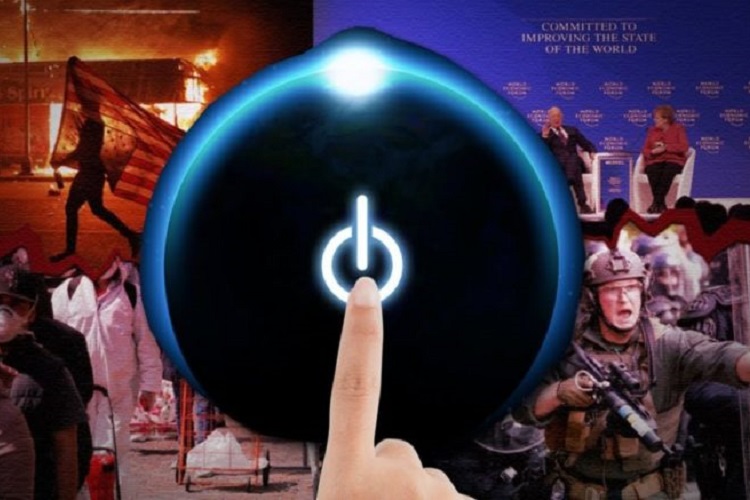 For those not familiar with the phrase “global economic reset”, it is one that has been used ever increasingly by elitists in the central banking world for several years. I first heard it referenced by Christine Lagarde, the head of the IMF at the time, in 2014. The reset is often mentioned in the same breath as ideas like “the New Multilateralism” or “the Multipolar World Order” or “the New World Order”. All of these phrases mean essentially the same thing.

The reset is promoted as a solution to the ongoing economic crisis which was triggered in 2008. This same financial crash is still with us today; but now, after a decade of central bank money printing and debt creation, the bubble is even bigger than it was before. As always, the central bank “cure” is far worse than the disease, and the renewed crash we face today is far more deadly than what would have happened in 2008 if we had simply taken our medicine and refused to prop up weak parts of the economy artificially.

Many alternative economists often wrongly attribute the Fed’s habit of making things worse to “hubris” or “ignorance”. They think the Fed actually wants to save the financial system or “protect the golden goose”, but this is not reality. The truth is, the Fed is not a bumbling maintenance man, the Fed is a saboteur, a suicide bomber that is willing to destroy even itself as an institution in order to explode the US economy and clear the path for a new globally centralized one world system. Hence, the “Global Reset”.

In 2015 in my article ‘The Global Economic Reset Has Begun’, I stated:

The global reset is not a “response” to the process of collapse we are trapped in today. No, the global reset as implemented by central banks and the BIS/IMF is the cause of the collapse. The collapse is a tool, a flamethrower burning a great hole in the forest to make way for the foundations of the globalist Ziggurat to be built….economic disaster serves the interests of elitists.

Now in 2020 we see the globalist plan coming to fruition, with the elites revealing what appears to be their intent to launch their reset in 2021. The World Economic Forum officially announced the Great Reset initiative as part of their Covid Action Platform last week, and a summit is scheduled in January 2021 to discuss their plans more openly with the world and the mainstream media.

The WEF also posted a rather bizarre video on the Reset, which consists of a series of images of the world falling apart (and images of factories releasing harmless carbon emission into the air which I suppose is meant to scare us with notions of global warming). The destruction is then “reset” at the push of a button, with everything reversing back to a pristine human-less world of nature and the words “Join Us”.

The reset, according to discussions by the IMF, is basically the next stage in the formation of a one-world economic system and potential global government. This seems to fall in line with the solutions offered during the Event 201 pandemic simulation; a simulation of a coronavirus pandemic that was held by the Bill And Melinda Gates Foundation and the World Economic Forum only two months before the REAL THING happened at the beginning of 2020. Event 201 suggested that one of the top solutions to a pandemic would be the institution of a centralized global economic body that could handle the financial response to the coronavirus.

Is it not convenient that the events of the real coronavirus pandemic fall exactly in line with the Event 201 simulation, as well as directly in line with the global reset plans of the IMF and the World Economic Forum? As they say, let no crisis go to waste, or, as is the motto of the globalists “Order Out Of Chaos”.

With civil unrest about to become a way of life for many parts of the world including the US, and the pandemic set for a resurgence of infections after the “reopening”, creating a rationale for a second wave of lockdowns probably in July, the economy as we know it is being destroyed. The last vestiges of the system, hanging by a thin thread after the crash of 2008, are now being cut.

The goal is rather obvious – terrify the population with poverty, internal conflicts and a broken supply chain until they lobby the establishment for help. Then, offer the “solution” of medical tyranny, immunity passports, martial law, a global economic system based on a cashless digital society in which privacy in trade is erased, and then slowly but surely form a faceless “multilateral” global government which answers to no one and does whatever it pleases.

I remember back in 2014 when Christine Lagarde first began talking about the reset. That same year she also made a very strange speech to the National Press Club in which she started rambling gleefully about numerology and the “magic number 7”. Many within the club laughed, as there was apparently an inside joke that the rest of us were not privy to. Well, I would point out that the World Economic Forum meeting on the global reset in 2021 will be held exactly 7 years after Lagarde gave that speech. Just another interesting coincidence I suppose…

The new world order, the global reset, is a long running scheme to centralize power, but in a way that is meant to be sustained for centuries to come. The elites know that it is not enough to achieve global governance by force alone; such an attempt would only lead to resistance and eternal rebellion. No, what the elites want is for the public to ASK, even beg for global governance. If the public is tricked into demanding it as a way to save them from the horrors of global chaos, then they are far less likely to rebel against it later. Problem – reaction – solution.

The pandemic is not going away anytime soon. Everyone should expect that state governments and the federal government will call for renewed lockdowns. With these new lockdowns, the US economy in particular will be finished. With 40 million people losing their jobs during the last lockdowns (46 million as of today – Ed.), many states only partially reopened, and only 13% to 18% of small businesses receiving bailout loans to survive, the next two months are going to be a devastating wake-up call.

The real solution will be for people to form more self-reliant communities free of the mainstream economy. The real solution should be decentralization and independence, not centralization and slavery. The globalists will seek to interfere with any effort to break from the program. That said, they can do very little if millions of people enact localization efforts at the same time. If people aren’t reliant on the system, then they cannot be controlled by the system.

The real test will come with the final collapse of the existing economy. When stagflation spikes even harder than it is right now and prices of necessities double or triple yet again, and joblessness skyrockets even further, how many people will clamor for the globalist solution and how many will build their own systems? How many will be bowing in submission and how many will be ready to fight back. It is a question I still don’t have an answer to even after 14 years of analysis on the issue.

What I suspect is that many people will fight back. Not as many as we might hope for, but enough to defend the cause of liberty. Maybe this is overly optimistic, but I believe the globalists are destined to lose this war in the long run.

Brandon Smith is the founder of Alt-Market is an organization designed to help you find like-minded activists and preppers in your local area so that you can network and construct communities for mutual aid and defense. Join Alt-Market.com today and learn what it means to step away from the system and build something better or contribute to their Safe Haven Project. You can contact Brandon Smith at: brandon@alt-market.com

**This article (Globalists Reveal That The “Great Economic Reset” Is Coming In 2021) was originally published at Activist Post and is re-posted here with permission.**