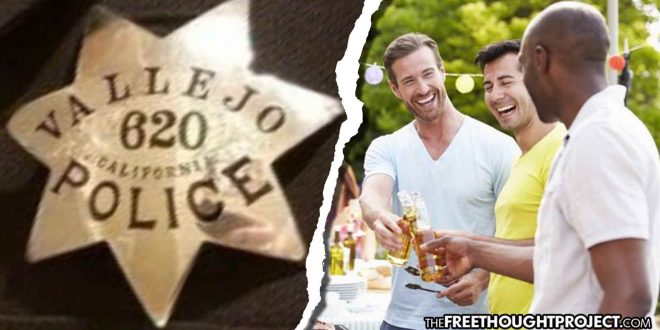 Vallejo, CA — After the wholesale execution of Willie McCoy — a rapper who was killed by police as he slept in the Drive Thru of a Taco Bell — a disturbing practice by the department who killed him came to light. SWAT team commander with two master’s degrees, Captain John Whitney exposed the celebratory practice of beers, barbecues, and badge bending to commemorate killer cops. After this decorated cop exposed this practice, he was forced out of the job.

According to a shocking investigation by Open Vallejo, for years, a secretive clique inside the Vallejo Police Department has commemorated fatal shootings with beers, backyard barbecues, and by bending the points of their badges each time they kill in the line of duty

“Some days I feel like I work with a bunch of thugs who take pleasure out of hurting people,” a current member of the department told Open Vallejo on condition they not be named.

“It’s another black eye .. another issue that’s going to make our community distrusting,” said Vallejo Mayor Bob Sampayan. “Folks need to understand that was probably over a year ago. It has been discovered and changes have been made.”

As a former police officer, Sampayan said “I’m not very happy with what it represented. To tout and celebrate that you have shot somebody, is absolutely disgusting. There’s no place for that kind of display.”

Sampayan said that yes, “from what I’ve heard, it (the bent tip) was legitimate.”

He believed that former Vallejo Police Chief Andrew Bidou “tried to take care of it,” via inspections by his captains.

“If someone found with a ‘bent badge’ tip, somewhere or another it was repaired,” Sampayan said.

The mayor added that “when I first heard about it, I was really shocked and appalled. I never knew that was the significance of a bent badge tip.”

Despite reports from several officers from within the department that the badge bending kill celebrations took place, the department continues to play dumb.

“Celebrating the killing of a human being is never acceptable. I am deeply disturbed by these allegations,” Vallejo Police Chief Shawny Williams said in a statement. “With this new information available to me, I am doing an official inquiry into the department and the allegations. The inquiry helps me to understand the culture of the department in a greater way and to take corrective action.”

“If there is credible evidence found, I will expand the inquiry into an official investigation,” Williams continued. “I want our community to know that misconduct will never be tolerated under my administration.”

Naturally, the police union played its role in vehemently denying the accusations, chalking it up to an attack on police.

“I have no knowledge of this practice occurring within the Vallejo Police Department. Frankly, it’s a ridiculous notion,” Lt. Michael Nichelini, Vallejo Police Officers Association president said. “I read the Open Vallejo story and found it beyond inflammatory. The photograph of the badge they used as ‘proof’ looked completely normal. Do people not understand that our badges are concave? We don’t have flat badges and bend them on purpose. They come that way. All of these recent attacks on Vallejo police officers are fabricated lies pushed to fit a narrative that doesn’t exist. It’s a distraction from any real collaborative work and conversation that needs to be had about crime and workload.”

But Nichelini’s words ring hollow and hold no water as he is currently on suspension for destroying evidence from the execution of Sean Monterrosa who was killed by Officer Jerrett Tonn. Monterrosa was unarmed, on his knees, and had his hands in the air when Tonn opened fire through the windshield of his cruiser, killing him.

“This is a law-enforcement officer with experience, that you know you don’t destroy evidence, he’s not the kind of – he shouldn’t have been thinking he can make that decision as to whether it was valuable evidence or not,” Burris said.

According to Open Vallejo, when they began reporting on this story, they received a series of threatening emails from an anonymous account using the name, “Tariq Aziz.” Law enforcement sources believe the author is a high-ranking Vallejo official with knowledge of the badge-bending tradition. This is consistent with Open Vallejo’s analysis of the emails and other evidence.

After several failed attempts to get a response, the author of the emails addressed the subject of this story directly.

“The cops who shoot someone bend the tabs on their badges,” he wrote on April 5. “Kind of like a notch on the bedpost. It’s an indicator to each other how many hoodlums they’ve shot. They think it’s funny.”

“Ask Whitney,” the message continued. “He knows all this stuff. It’s why he’s gone.”

As people continue to protest in the streets about the police brutality in America, before claiming they have nothing to protest, remember that a police department celebrates the killing of the citizens they police — and the chances of it being a single department are slim to none.