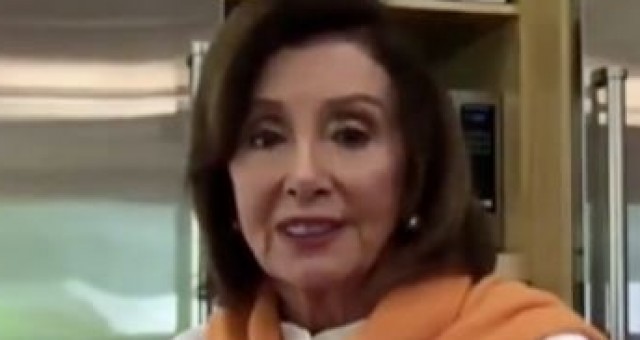 OPINION by USAFEATURESMEDIA and DINO PORRAZZO at Right Wing Tribune

The Republican National Committee noted that while Pelosi was showcasing her gourmet ice cream and $20,000-plus freezer, she also ignored the plight of thousands of small business owners as a loan program designed to help them sustain themselves as part of the $2.2 trillion coronavirus relief measure ran out of funds.

“The Paycheck Protection Program ran out of money this morning because Democrats, led by Nancy Pelosi, blocked the necessary $250 billion replenishment for the program that Congressional Republicans tried to deliver,” the Republican National Committee said in an email.

“Now ‘Nancy Antoinette’ has to explain to America why she chose to show off her luxury refrigerators and $13-dollar a pint ice cream collection from her chateau in San Francisco instead of funding the Paycheck Protection Program which has saved millions of jobs all across the country,” the email continued.

Pelosi appeared Tuesday night on “The Late, Late Show with James Corden” from her home in San Francisco. Pelosi is one of the wealthiest members of Congress.

During the interview, she spoke of the need for more COVID-19 testing and criticized President Donald Trump’s handling of the pandemic.

Also, when Corden asked for a “show and tell” revelation, Pelosi highlighted a basket of expensive chocolates and her high-end Jeni ice cream collection.

We all have found our ways to keep our spirits up during these trying times. Mine just happens to fill up my freezer. #LateLateShow pic.twitter.com/dqA32d5lU1

Yesterday Right Wing Tribune reported that meanwhile, tens of thousands of Americans are now reliant largely on government checks and food banks to get by, thanks to being thrown out of work by governors and mayors, many of whom overreacted to the coronavirus pandemic.

Mother Jones has published a montage of photos showing lines of hundreds and thousands at food banks.

“We’re looking at an increase of 17.1 million people over the course of the next six months,” Claire Babineaux-Fontenot, CEO of Feeding America, one of the country’s largest hunger-relief organizations, told NBC News.

She highlighted a 98 percent increase in demand for free food and Feeding America, expects to lose $1.4 billion trying to survive.

According to the Guardian, the number of people lining up in Phoenix, Arizona has tripled. Across southern Arizona, it doubled. In Las Vegas, where demand is up by 30 percent, one of the largest food pantries has shuttered 170 out of 180 locations. In Massachusetts, food pantries increased distribution by 849 percent.

Matt Whitlock, an official with the National Republican Senatorial Committee, tweeted, “This might be her ‘let them eat ice cream’ moment.”

Parts of this article originally appeared at USA FEATURES NEWS and was republished with permission.