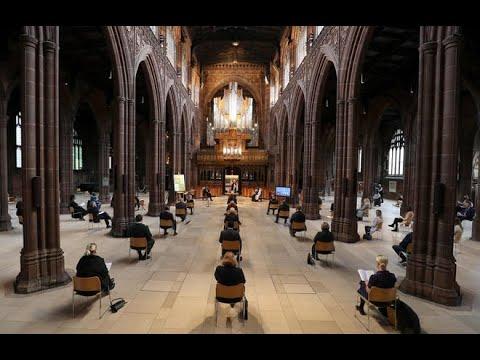 This past weekend I had the privilege of joining a group of amazing Patriots in Virginia. As I entered the church, I found myself in a time jump back to when things were normal. There was not a single mask to be found in the entirety of the church. People worshipped their Creator unencumbered by coercive burdens laid upon them by the state.

While it was refreshing to experience biblical Christianity for the weekend, on Monday morning I found myself once again thrust into the Twilight Zone of 2020 America where decrees from governors have ranged from:

Churches shall not assemble at all … churches must meet outdoors … churches can meet indoors if they social distance with rigid sanitizing practices … churches may meet but cannot sing praise and worship, touch each other, have baptism, marriage, or funeral services, or partake in the holy sacrament of communion. To top it all off, governments are now requiring that churches must mandate their congregants to wear a mask when attending services.

This perhaps, is the greatest fraud contrived against the American church in history.

When Thomas Jefferson promised a protective wall of separation of Church and State to the Danbury Baptists, he assured them that no American civil government would ever be construed to deny Churches their religious rights and privileges. Furthermore, the government could never dictate, regulate, or make any law concerning an establishment of religion that would prohibit in any way shape or form the free exercise thereof. Jefferson of course, was referring to the First Amendment to the United States Constitution to back up his claims and promise.

There is no lawful authority for the government to encroach upon the religious worship of the church. To say the government can tell the church what to do would be likened to saying that I, Jake MacAulay, can dictate the actions of the president of Russia or the Prime Minister of Japan. This is because our Founders intended that the very same authoritative separations that exist between countries like the U.S. and Russia or Japan exist between the American Civil Government and the Church.

At worst, this could be considered a conspiracy against the American church. At best, this is an embarrassing admission that government views churches as irrelevant as they do a local social club.

Founding Father Noah Webster asserted, “The Christian religion, in its purity, is the basis, or rather the source of all genuine freedom in government…and I am persuaded that no civil government of a republican form can exist and be durable in which the principles of that religion have not a controlling influence.”

As our governors delay the restoration of unencumbered church services and add more conditions, it is crucial to understand regardless of whether the virus is fatal or phony, the lockdowns and shutdowns and mandates for social distancing and masks have no lawful basis in a church sanctuary.

Sign up for a FREE U.S. Constitution course with Jake MacAulay and the Institute on the Constitution.