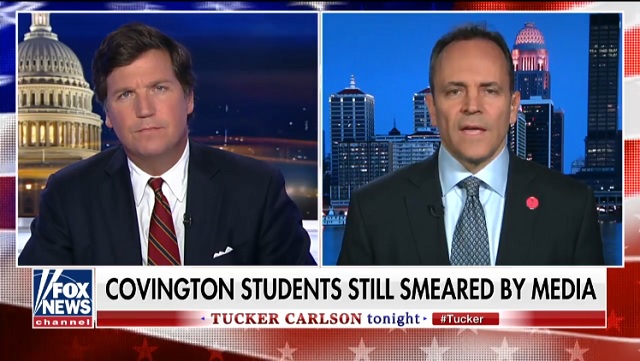 Kentucky Governor Matt Bevin delivered an impassioned defense of the students of Covington Catholic High School Wednesday on Tucker Carlson Tonight and slammed the media and left for their “incredible amount of bigotry.”

“The level of bigotry that was evident throughout this came from one side entirely and it was twofold,” Bevin said. “It came in the moments prior to the little snippets that set people into a tizzy when there was true racial bigotry shown by people that were with the fellow drumming, when they told people to go back to Europe — that this wasn’t their country. Also, preceding even that as people were yelling some incredibly vile and racist things at these teenaged students.”

“None of that was covered,” Bevin said. “That was the only true racism and bigotry that was evident on that day.”

“People didn’t bother to do the basic checking of facts — that anybody who was worth their salt in the media should have and would have done — because this fit the narrative and the stereotype and the bigotry that they wanted so desperately to be able to run with and I find it offensive that people have insulted these students as they did.”

“There are none so intolerant than those who preach tolerance,” Bevin said.

It was amazing how quick those who preach tolerance and non-judgment of others were to judge and label some high school students based on partial information…There are none more intolerant than liberals who don’t like your options, values, faith beliefs, political stance, etc

In a world where we have a wealth of information at our fingertips, we have increasingly little discernment and wisdom…

A little more genuine caring for one another and a little less digital vitriol would be good for all..