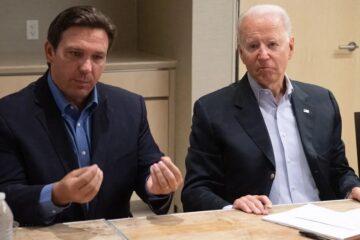 If people would simply take a step back and pull the curtains open concerning what it is that they are sold by the mainstream media when it comes to the corruption in government, they would actually be respected once again by a dark world (Proverbs 18:17).

Christians, patriots and conservatives are to be fruit inspectors, and if we were true to our God, in many cases, we would lay the axe to the root of many of the corrupt trees (politicians) that are sold to us as the good (Matthew 7:16).

One such politician that plays up to the people under false pretenses, of course, is Ron Desantis, the governor from the state of Florida.

Ron likes to sell himself as the people’s man, fighting for his constituents (Ephesians 4:14).

Watch “DeSantis Slam Biden For ‘Trying To Take People’s Jobs Away,’ And ‘Plunge’ Them Into ‘Destitution’ Over Vax Mandate.”

DeSantis, a potential 2024 presidential candidate, has spoken out forcefully against vaccination rules placed on employers, and last month said that President Joe Biden’s vaccine mandate was a violation of Florida law.

“Let’s not have Biden come in and effectively take away — threaten to take away — the jobs of people who have been working hard throughout this entire pandemic,” DeSantis said during a news conference this week. “I am offended that a police officer could potentially lose their job.”

Well, friends, what Ron says and what Ron has done are two different stories. Back in June of 2021, we found that Ron wasn’t actually the man that many believed him to be (2 Corinthians 11:14-15).

TRENDING: Just What Is In Packaged Food?

As a matter of fact, we find Texas Governor Greg Abbott playing this same dangerous game with the people’s freedoms by telling them the opposite of what it was that they did.

Most recently, Florida Governor Ron DeSantis had said that Vaccine Passports were unacceptable. So, he created a bill to prevent their implementation, not that he had to do this because they are unconstitutional, but as you know, the show must go on. However, what we discovered is that he and Texas Governor Gregg Abbott are doing the opposite of what the bills were sold to their constituents as.

Health Impact news recently exposed the both of them for who it is that they are!

Governors of the two largest Republican states in the U.S. have recently taken political action to restrict or prohibit “vaccine passports” as a means of discriminating against private citizens who choose not get one of the COVID-19 bioweapon shots.

Does this mean that Greg Abbott and Ron DeSantis are against the bioweapon shots that have killed tens of thousands of people, and are now being injected into children?

Hardly. In fact, both these two governors, and ALL governors in the United States right now, regardless of political affiliation, are accomplices to mass murder!
Unless I missed some news somewhere, once the FDA and CDC allowed emergency use authorization to start injecting these bioweapon COVID-19 shots into children, NONE of the U.S. Governors took action in their state to stop the mass injections of children with these bioweapon shots, even though they have the authority to do so.

Republican Florida Governor Ron DeSantis recently signed into law SB 2006 which “Prohibits government, business & educational institutions from requiring proof of COVID vaccination.”
There are reports now circulating in the alternative media from those who have actually read the bill, and what they have discovered is that while the bill prohibits discrimination based on COVID-19 “vaccination” status, it allows law enforcement to forcibly vaccinate its citizens, as well as lock them away in quarantine at the direction of “State Health Officers.”

An overlooked section of Florida Senate Bill 2006, put into law by the state legislature and Governor Ron DeSantis on May 3, 2021, allows government officials to forcibly vaccinate citizens.
Ironically, the bill was widely supported as it was allegedly intended to ban vaccine passports in Florida.

“In Florida, your personal choice regarding vaccinations will be protected and no business or government entity will be able to deny you services based on your decision,” DeSantis told Floridians.

While the legislature does prohibit private businesses and government entities from asking for proof of a COVID vaccination, it also allows the state to vaccinate citizens “by any means necessary”.

People must pay attention to the details when a politician comes across as their defenders; and why you, might ask? It’s because you will find that they are not at all your defenders, but just the exact opposite, and in this case, that is exactly what is happening (Isaiah 5:20).