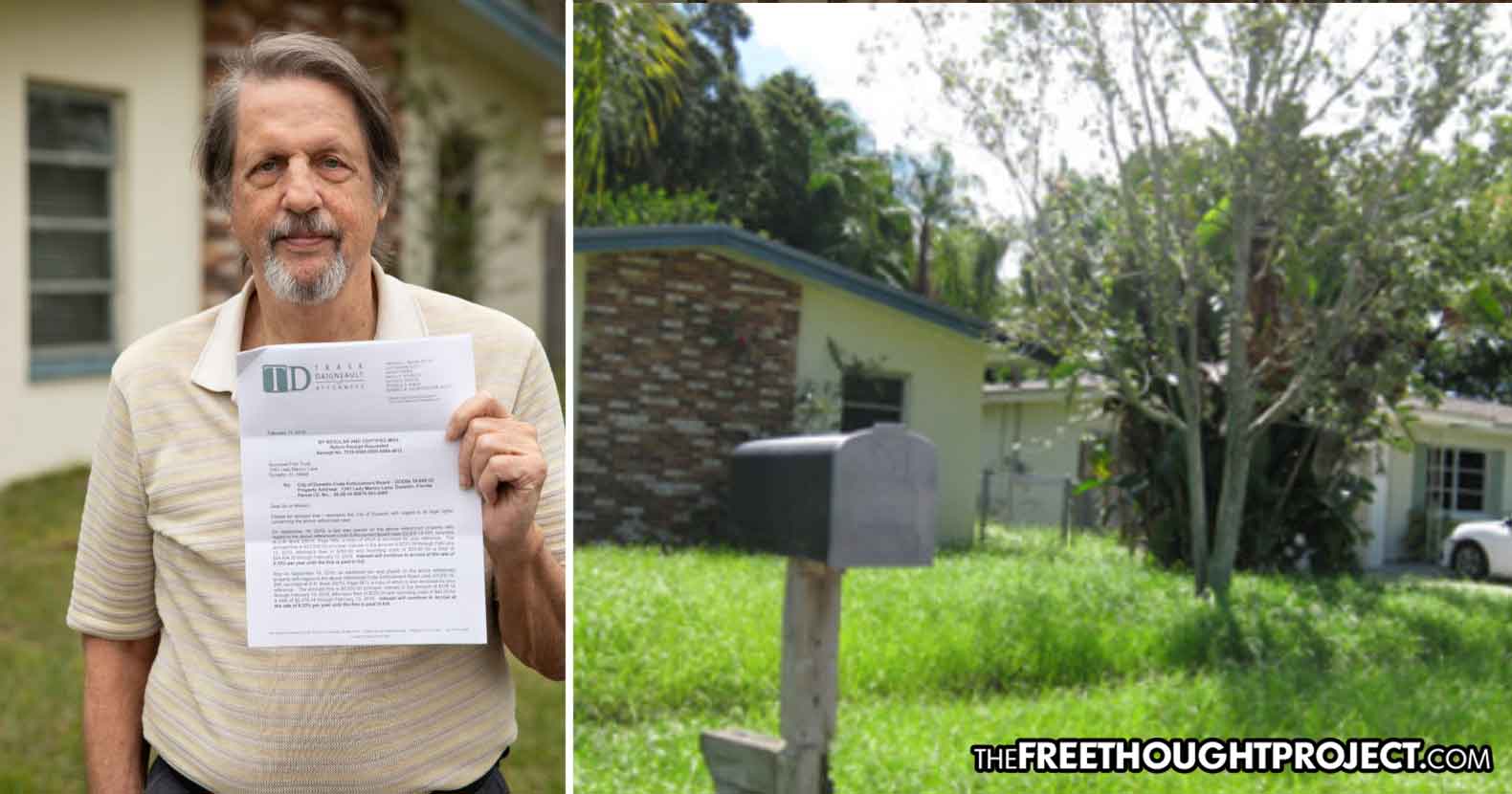 Dunedin, FL — Jim Ficken is not a criminal, has never been in jail, and is a model citizen in the town of Dunedin, Florida. However, the government intends to rob him and steal his home because Ficken’s grass grew too long and Ficken was unable to cut it.

The entire police state overreach began for Ficken last year when he was out of town trying to take care of his late mother’s estate and his grass did what grass does, it grew. Knowing that it is unpleasing to neighbors to grow long grass, Ficken hired a friend to cut it for him while he was away, but that friend died and Ficken had no idea.

”The grass did what grass does… and a code inspector saw it was more than the 10 inches the city allows and Jim was on the hook,” said Andrew Ward, one of Ficken’s attorneys from the Institute for Justice, according to FOX13.

Because Ficken’s grass was over 10 inches, the city government claimed Jim owed them money. Every day that Ficken kept his grass over the “legal limit,” the government would steal $500 from him. This went on for 57 days, and now, the government claims Ficken owes them nearly $30,000.

Ficken, who is retired and on a fixed income, cannot pay this insane amount of money. Being unable to pay immoral fines imposed on one’s private property by goons in the local government is of no concern to said goons and they intend on getting their money—by any means necessary. So, they are going to take his home.

This week the city informed Ficken that they will be stealing his home by moving toward foreclosure on it.

The city issued the following statement in regards to Ficken’s case:

MR. FICKEN WAS CITED FOR REPEAT VIOLATIONS ON HIS RENTAL PROPERTY. ON TUESDAY, MAY 7, 2019 THE CITY OF DUNEDIN CODE ENFORCEMENT BOARD AUTHORIZED THE CITY ATTORNEY’S OFFICE TO FILE FORECLOSURE ACTIONS AFTER RESOLUTION OF THE CASE COULD NOT BE AGREED UPON WITH MR. FICKEN. THE CITY ATTORNEY’S OFFICE HAS NOT HAD AN OPPORTUNITY TO REVIEW LITIGATION FILED BY MR. FICKEN AND AS SUCH HAS NO COMMENT AT THIS JUNCTURE.

“I’m trying not to think about it but I’ll be booted out of this house and I’ll have to find another place to live,” Ficken said.

Luckily for Ficken, the good folks at the Institute for Justice are helping him to fight his case.

”We’re arguing in our lawsuit that limitless fines are, in fact, unconstitutional,” said fellow Institute for Justice attorney Ari Bargil. “Jim asked the city if they would reconsider and give him a fair fine or a new hearing, but they rejected him. Now they are trying to take his home. But the amount of Jim’s fine is wildly out of proportion to the offense of having long grass. The Institute for Justice will defend Jim’s constitutional right to be free from this excessive fine so that he can keep his home.”

What makes this move by the city that much more egregious is the fact that as soon as Ficken was able to mow his grass again, he did, and it’s been cut ever since.

“It is outrageous for being fined this amount for being tardy cutting your grass,” he said. And he’s right.

Ficken and the folks at the Institute for Justice plan on fighting this case all the way to the Supreme Court if they have to.

According to IJ, this case is bigger than just Jim. In 2007, the entire amount of fines that Dunedin imposed for code violations was $34,000—only a little more than the amount the city is now demanding for Jim’s lawn alone. A decade later, in 2017, the city was raking in 20 times as much, about $700,000. In fiscal year 2018, it collected almost $1.3 million in total fines. The city’s code‑enforcement attorney—the one who refused to negotiate with Jim—calls the system a “well‑oiled machine.” In 2018 alone, the city authorized foreclosure on 18 homes. In another case, the city authorized foreclosure to collect $250.

While these excessive fines and theft of property may seem over the top, force, extortion, and theft is how the government maintains its power. As Ficken is learning, anyone who stands in the way of that power pays a heavy price.

Indeed, as TFTP has previously reported, the government has gone so far as to issue arrest warrants for elderly women for tall grass. Seventy-five-year-old Gerry Suttle was stunned when she received a call from the local police chief, informing her that she had a warrant issued for her arrest.

“I’ll be 76 in July,” Suttle said. “I’m 75 now, and I’ve never had a speeding ticket, never had a parking ticket and now here I am got a warrant for my arrest from the big city of Riesel.”

Suttle’s arrest warrant was for failure to appear before a judge on a matter regarding the height of the grass on a property she owns across the street from her home.