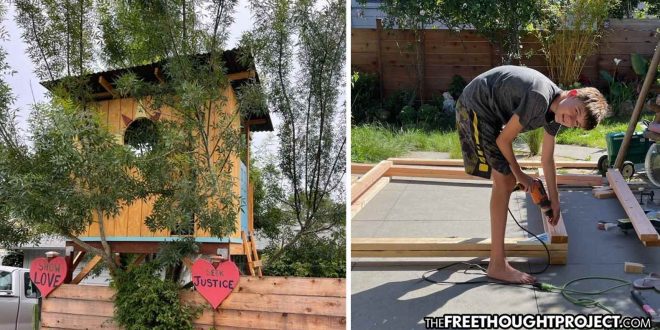 Santa Cruz, CA — As TFTP has reported over the last year and a half, despite being largely unaffected by coronavirus health issues, the state’s actions of lockdowns, mask mandates, virtual school and other ridiculous police state measures, children across the planet have suffered as a result of these policies. As a result of this madness, some proactive parents tried to help their children get through it by trying to maintain some semblance of normalcy at home. Kindred Sparks was one of those parents.

Sparks’ 12-year-old son had his life come to a grinding halt last year as the covid pandemic and subsequent unscientific government lockdowns spread across the country. Instead of giving up after school was cancelled, sports were cancelled, and his fifth grade graduation cancelled, Mercury News reports that he came up with an idea — create and build a tree house.

“The boys have always wanted a treehouse and then with the pandemic, we started with just a little fort around the tree. In late winter … he drew up blueprints and watched Youtube videos online,” Sparks told Mercury News. “We had the opportunity to turn that into a learning experience.”

For the next couple of months, the kids worked on and finally finished the tree house in May. The pictures the family shared with Mercury News were pretty epic, and the family was extremely proud of their endeavor.

“These kids have had everything taken away from them, these houses are small. We are blessed to have a yard because there are lots of kids who didn’t during the pandemic,” Sparks said. “But to have a little private fort in the front that’s his own … that sleepover was like a movie.”

Even the neighbors celebrated the construction of the tree house — which was entirely built on the property the Sparks owned. Unfortunately, however, not all their neighbors were in agreeance and one of them decided to sic the government to shut down this child’s dream.

Several months after they finished construction, the Sparks family received a letter in the mail from the local government. The letter, from the Santa Cruz Department of Planning and Community Development, said an neighbor had complained that the tree house was not up to code and therefore, the family was subject to an untold number of fines.

“They dated it for Aug. 4 but we didn’t receive notice until three days ago … It’s hard because it’s always, ‘Leave a message and we’ll get back to you.’ It’s a slow process, and we were told that all costs incurred by the city relative to our case can be billed to us,” Kindred told the paper.

As the letter was so vague, Kindred has no idea what’s going to happen to them and amazingly enough, she remains supportive of the process, but told Mercury News, she plans on fighting for the tree house.

“The (staff member) said as long as no one complains, they aren’t proactive about shutting them down … I have no ill intention because I know they’re trying their best over there,” Sparks said. “I don’t like any kind of conflict and confrontation … if it wasn’t for the fact that this is my son’s project I probably would just (defer) but as a mother, just with everything these kids have been through this past year and a half, I owe it to him to fight for him.”

“With my youngest, I’m not really sure he knows it could be taken down,” she said. “But the older one who built it is super bummed. He really doesn’t understand why.”

For now, the fate of the Sparks kids’ tree house remains in limbo. Will they be forced to tear it down or pay hefty fines for building it out of code? Those questions remain unanswered but if history is any indicator, things could get far worse for this family.

For free-thinking freedom lovers, the thought of the city telling property owners that they can’t enhance their own property with a tree house is an absurdity. Even more ludicrous is the notion property owners ever really own their property. The minute a family stops paying government imposed property taxes, the city takes their property and sells it to someone else, all of which raises the question, “do we really own property or does the government just let us think we do.”

After all, as TFTP has reported on numerous occasions outside of just tree houses, conforming to city codes and permitting is required by law. Even the act of gardening has been ruled illegal in some parts of the country.

Currently, in almost every state in the union, people have to have a permit to go fishing, build a shed, get married, travel, have a business, work, drive a car, and the list goes on and on. So, who’s really free if every major life decision is left up to someone else?