Nothing to see here folks, just a free and fair election in a Democrat(ic) country that’s definitely not controlled by a corrupt and criminal ruling class, crooked intelligence agencies and Silicon Valley oligarchs!

UPDATE: If your wondering where two of the tweets below went…

OK. So both Michigan AND Wisconsin have VERTICAL LINES where Biden votes are injected in. It’s totally normal for the oligarchs in Silicon Valley to silence the President of the United States for pointing out this insane situation!

Last night I was leading, often solidly, in many key States, in almost all instances Democrat run & controlled. Then, one by one, they started to magically disappear as surprise ballot dumps were counted. VERY STRANGE, and the “pollsters” got it completely & historically wrong!

How come every time they count Mail-In ballot dumps they are so devastating in their percentage and power of destruction? 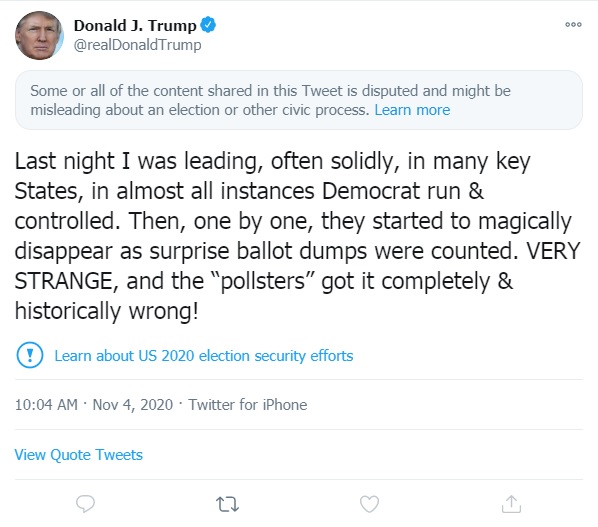 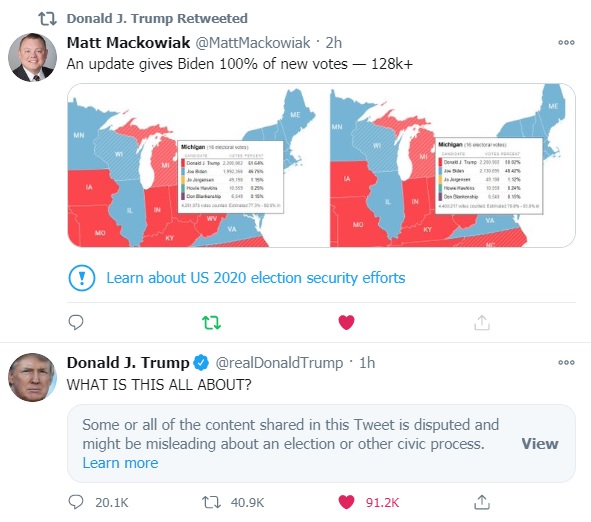 [NOTE: The image Mackowiak shared was the result of a “typo”! See below for update!

They are finding Biden votes all over the place — in Pennsylvania, Wisconsin, and Michigan. So bad for our Country!

They are working hard to make up 500,000 vote advantage in Pennsylvania disappear — ASAP. Likewise, Michigan and others!

This is all completely normal, folks

They want you to think that censoring a President is somehow normal, that it's a legitimate power for unelected oligarchs to have.

That's why they did it again and again over the course of this election.

It is not normal. And it should make you angry. https://t.co/hpwmowGouv

Joe Biden had zero voter enthusiasm but won the most votes ever? https://t.co/Lm2XYfFLPw

Here’s Joe Biden in his own words two weeks ago

2 weeks ago Joe Biden bragged about having "the most extensive and inclusive voter fraud organization in the history of American politics"pic.twitter.com/FTGpfcJV4A

UPDATE: It’s now being reported that the 153,710 vote surge for Joe Biden reported by Decision Desk HQ and captured by Matt Mackowiak in Michigan was the result of a “typo”!

UPDATE: The influx of 138,339 Biden votes cited in the tweets about Michigan were the result of a data error, according to a spokesperson for Decision Desk HQ. The error was later rectified.

The Michigan situation was a TYPO.

The massive jump in Biden votes out of nowhere is because Shiawassee county reported “153710” when it SHOULD have been “15371.”

This tweet was taken and share honestly. I have now learned the MI update referenced was a typo in one county.

Decision Desk HQ said in a statement that it was a “simple data error from a file created by the state that we ingested.”

UPDATE: The influx of 138,339 Biden votes cited in the tweets about Michigan were the result of a data error, according to a spokesperson for Decision Desk HQ. The error was later rectified.

Trump is still supposedly narrowly behind:

The graph of Michigan above was using data from Edison Research and ABC News and does not appear to have been affected.

U.S. media finally comes around, declares that government false flags are not crazy conspiracy theories after all

Taxes in California are projected to DOUBLE as the failed state forces residents to pay $1,000 a month for Universal Sick Care