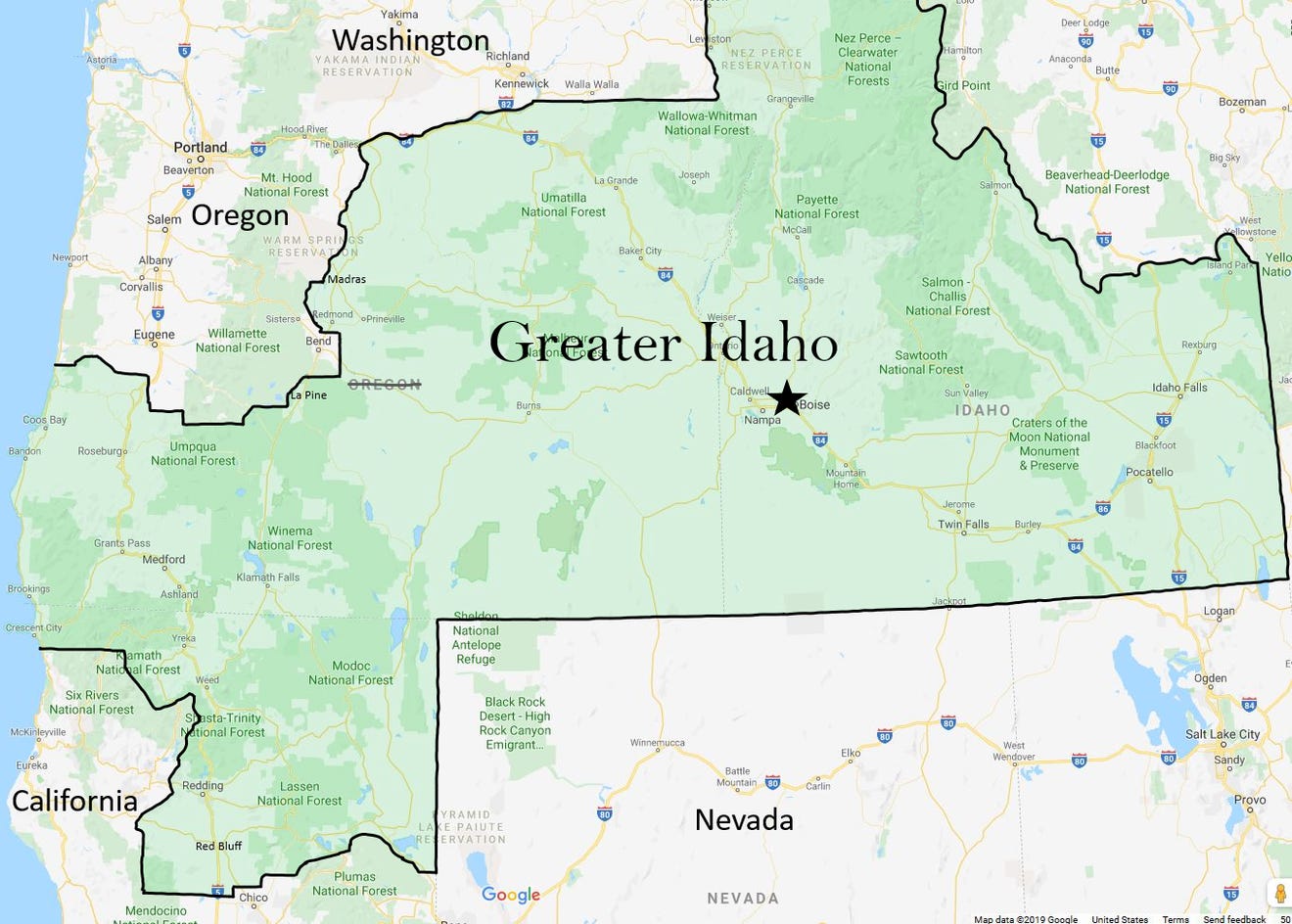 Is the state of Idaho going to get a whole lot bigger? A group known as Greater Idaho is pushing for rural counties in Oregon and northern California to secede and become part of the state of Idaho. In fact, as you will see below, this effort has actually been endorsed by some of the top Republicans in the Oregon legislature. Today, the Oregon state government is completely and utterly dominated by the left, and due to the demographics of the state that is not likely to change any time soon. So conservatives in rural areas that are deeply upset over the direction of the state essentially have just two options. They can either move to a more conservative state, or they can attempt to redraw state lines.

Of course attempting to redraw state lines is a very complicated process, but at this point conservatives in Oregon are so fed up with the state legislature that they have decided to push ahead with this effort.

In fact, it is being reported that signatures are being collected right now in order to “put the proposal on ballots in November”…

Frustrated by liberal policies, some Oregon residents petitioned to leave the state – by moving the border with Idaho westward.

The movement secured initial approval from two counties and aims to get enough signatures to put the proposal on ballots in November, according to the group called Greater Idaho.

This is a very viable political movement, and it will be quite interesting to see where this goes.

For years, rural counties in Oregon have felt shortchanged by a state legislature that is dominated by the Portland area, and things have finally come to a breaking point. One of the chief organizers of this movement, Mike McCarter, says that this secession push “is our last resort”…

“Rural counties have become increasingly outraged by laws coming out of the Oregon Legislature that threaten our livelihoods, our industries, our wallet, our gun rights, and our values,” Mike McCarter, one of the chief petitioners, said in a news release. “We tried voting those legislators out, but rural Oregon is outnumbered and our voices are now ignored. This is our last resort.”

Initial efforts are focused on just a few counties, but eventually the goal of Greater Idaho is to get dozens of counties in Oregon and northern California to secede.

Out of Oregon’s existing 36 counties, only 14 would remain in the state if Greater Idaho is able to achieve their goals, and a big chunk of northern California would become Idaho territory as well.

But getting this accomplished will not be easy. Approval would be needed from the state legislatures of Oregon, California and Idaho, and that would be a real challenge.

On top of that, the U.S. Congress would have to approve any plan, and getting that to happen would probably require a miracle.

But one thing that this movement has going for it is the fact that it has been endorsed by some big name state lawmakers in Oregon, and that includes the top Republican in the state Senate…

The Republican leader in the state Senate, Sen. Herman Baertschiger, supports the idea and told CNN he’d even help write the secession legislation.

“Democrats should be paying attention to how unhappy these Oregonians are with the current regime to seek secession from Oregon. I would welcome the idea to serve on the Greater Idaho legislature!” he said.

Rep. Gary Leif, a Republican in the Oregon House of Representatives, has a poster of the “Greater Idaho” map hanging in his office.

“The Greater Idaho would then be the only West Coast state that is a conservative red coastal state. We would then truly be representing conservative values with rural constituents,” Leif explained.

It is certainly encouraging to see people take a really big idea and try to run with it.

But of course the liberals in Oregon are not exactly thrilled with the idea that most of their state could be ripped away from them and given to someone else. And as long as they are in firm control of the state legislature, it is going to be exceedingly difficult for this plan to get too far.

A similar scenario is playing out in Virginia. The Democrats have taken control of the state government, and the state continues to drift left with each passing year.

Obviously many of those living in rural Virginia counties do not like this one bit, and the recent attacks on Second Amendment rights brought things to a boiling point.

There has been a lot of talk that rural countries in Virginia could try to secede and join West Virginia, and West Virginia’s governor Jim Justice has publicly said that he would welcome those counties “with open arms”…

In an unlikely bid, West Virginia Gov. Jim Justice says he would welcome neighboring Virginia counties to join his state amid Democrats’ control of Virginia’s government.

“If you’re not truly happy where you are, we stand with open arms to take you from Virginia or anywhere where you may be,” said Justice, a Republican. “We stand strongly behind the Second Amendment, and we stand strongly for the unborn.”

But once again, this effort in Virginia is facing the same sorts of obstacles that the Greater Idaho movement is facing.

Of course anything that is worth doing in life is going to require effort. And those that are trying to secure a better future for themselves, their families and their communities should be greatly applauded for doing so.

Ultimately, this is yet another sign of how incredibly divided we have become as a nation. In recent years we have seen multitudes of conservatives move to “red states” and multitudes of liberals move to “blue states”, and that trend is likely to accelerate in the years ahead.

It has gotten to the point where many of us literally do not even want to live in an area that is controlled by the other side, and the 2020 election is going to deepen our existing political divisions no matter who ends up winning.