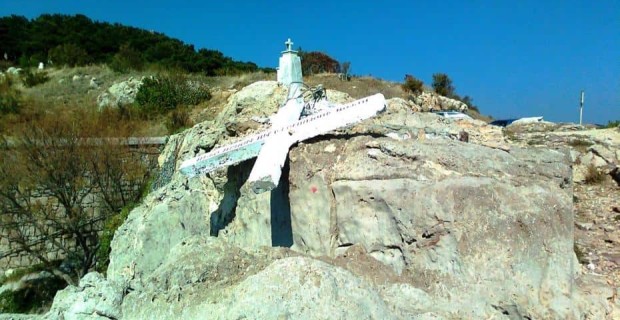 A large Christian cross on the Greek island of Lesbos was torn down after refugee organization claimed it was “offensive” to newly arriving Muslim migrants.

The cross, which was erected on the cliffs of Apellia, beneath the castle of Mytilene, was toppled after a group claiming to promote “intercultural coexistence” said it was an insult to migrants who had drowned in the sea and may cause offense to those swimming nearby.

Lesbos has been at the epicenter of the migrants crisis, with hundreds of asylum seekers still arriving every week, prompting angry clashes.

The pro-refugee group sent a letter to the Harbour Minister of Lesbos and the Mayor of Lesbos stating, “A few days ago they placed at Apeli of Mytilene a large cross, in order to prevent other people (refugees and migrants) from coming to swim. This act is illegal, unsightly (reminiscent of a grave) but mostly offensive to the symbol of Christianity, a symbol of love and sacrifice, not racism and intolerance.”

The group also claimed that the cross represented “a tool of aspiring crusaders.” It was toppled a few days after the letter was sent.

According to the Greek City Times, the removal of the cross, “caused strong reactions from locals who believe it goes against the religious beliefs of the majority of the inhabitants on the island.”

This is not the first time that Christian symbols have been removed so as not to offend or upset newly arrived migrants or non-Christians.

Back in 2015, a protestant church in Oberhausen, Germany removed Christian crosses, altars and pulpits in order to accommodate 50 Muslim migrants who were invited to stay in the building.

Earlier in the same month, the world’s first lesbian Bishop Eva Brunne suggested removing Christian crosses and symbols from a church in Stockholm, Sweden in order to make the building “more inviting” for Muslims.

In December last year, the Red Cross told Belgian branches of the international aid organization to remove remove crucifixes from the walls of their branches in order to look more secular.

In January, a Bavarian judge ordered a crucifix to be removed from the courtroom during the trial of an Afghan migrant who was accused of making death threats to another Afghan who converted to Christianity.

Last year, supermarket Lidl edited out Christian crosses on its Greek-style food packaging so as to be “religiously neutral”.