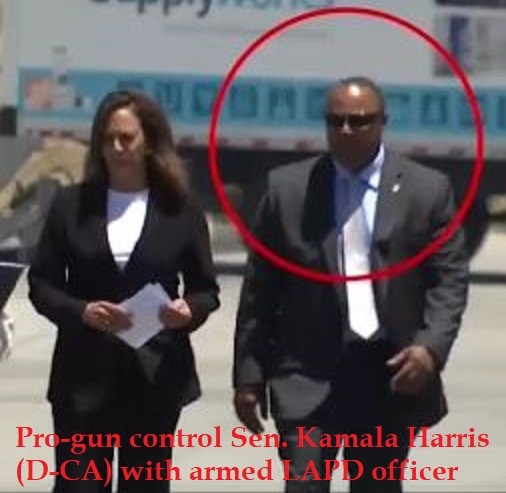 Sen. Kamala Harris (D-CA), viewed as a rising star in the Demonrat Party with presidential ambitions, is vocal in her gun-control advocacy.

Like other gun-control politicos, Harris is a hypocrite, spouting off on gun control, while she is protected by armed Los Angeles police officers, the costs of which are borne by taxpayers.

More outrageous still is that Harris has the LAPD’s armed protection even when she isn’t in Los Angeles.

Eric Leonard and Andrew Blankstein report for NBC4 Los Angeles, Sept. 6, 2018, that City of Los Angeles Payment Vouchers show that armed, plain-clothes LAPD officers were dispatched to California cities outside of Los Angeles at least a dozen times to provide security for Sen. Kamala Harris at public events, media appearances, and a party.

LA taxpayers paid for airline tickets, hotel stays, car rentals, and meals for the LAPD officers, according to detailed expense reports obtained by NBC News. The total cost of the trips, not including the officers’ overtime, topped $28,000.

Although the LAPD routinely provides security for dignitaries and officials visiting LA, a senior retired LAPD official said the protection extended to Harris for her travels to other cities was unprecedented.

Los Angeles mayor Eric Garcetti‘s spokesman Alex Comisar claims Garcetti had been “unaware” of this unusual arrangement, although Section 4.242.9(b) of the L.A. Administrative Code states:

With the exception of employees of the City Council or Office of the Mayor, all non-elected City officials and all other City employees shall notify the Mayor, the Chair of the Committee that oversees the Intergovernmental Relations function, and the Chief Legislative Analyst prior to traveling on official City business to Sacramento or to Washington, D.C.

Garcetti insists he hadn’t known until July, when new LAPD Chief Michel Moore conducted an “assessment of the threat” to Harris and “determined that this arrangement was no longer needed”.

Garcetti blames former LAPD Chief Charlie Beck. LAPD spokesman Josh Rubenstein said “Chief of Police Charlie Beck assigned a security detail for US Senator Kamala Harris shortly before she was sworn into office in 2017, based on a threat assessment he believed to be credible. Funding for the detail was provided by the Department budget.”

Beck’s signature appears on many of the LAPD documents authorizing the trips, including:

The decision to end the out-of-town security program for Harris was made around the time the Los Angeles Times filed a lawsuit that demanded Mayor Eric Garcetti turn over records detailing the taxpayer expense of his own security detail during his extensive out-of-state travels, after both City Hall and the LAPD refused to release the documents through a routine California Public Records Act request, claiming that the documents “could potentially undermine the Mayor’s safety and security.”

But the Times‘ lawsuit claims there is no portion of the Records Act that exempts these expense records from public disclosure. Even the U.S. Secret Service has provided information about the cost of traveling security details for both Presidents Trump and Obama, and the cities of Chicago, Baltimore, and Seattle have all produced similar mayoral expense records for public review.