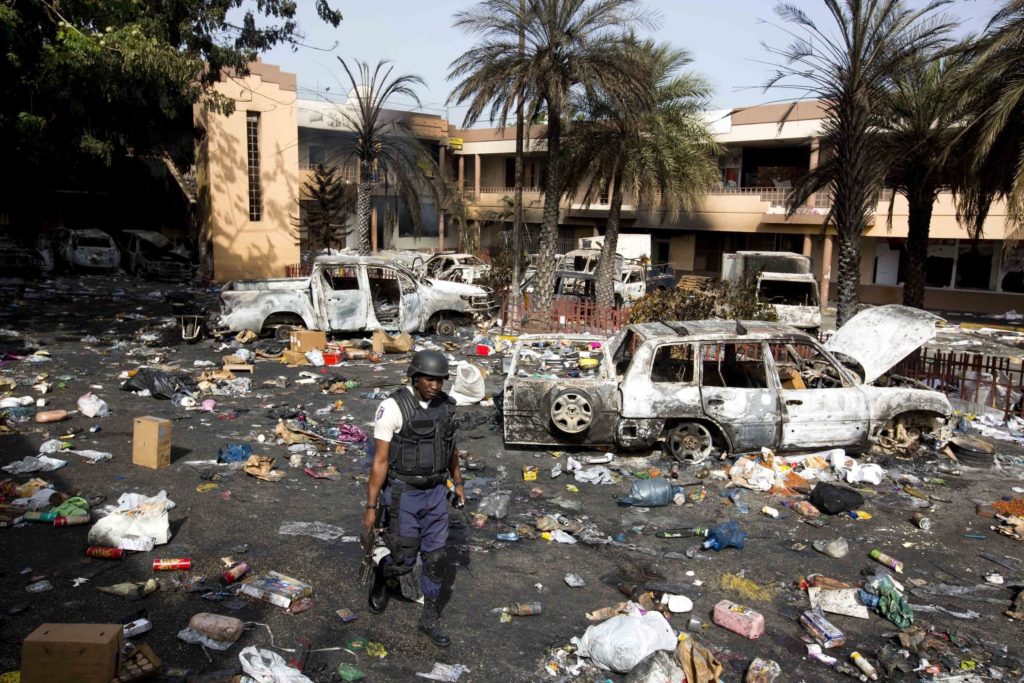 Utter chaos is erupting in Haiti, with videos and pictures of dead protesters against the current Jovenel Moise regime flooding social media. While MSM (Mainstream Media) is reporting on the deaths of protesters, the numbers are severely under-reported and the story is far from the full narrative playing out for a country that has been embroiled in various forms of corruption for years.

What MSM is further failing to report is that Haitian police aren’t the only ones involved in the Haitian massacre; the UN is also responsible with its military occupation established in the country in 2004.

A lot of outlets are reporting these protests have been ongoing for a week, failing to tell the full story. The truth of the matter is that dissent in the country has been growing for years.

On the lower level, these protests are products of concern Haitians expressed months ago regarding spiking fuel prices and alleged misuse of government funds for a joint Venezuelan oil initiative dubbed the Petrocaribe funds. On the higher level, the current political crisis stems from past corruption; and not just Martelly, as The Haitian Project expressed on Twitter.

In short, this is years of anger that has built up and is now being unleashed as protests on the streets.

In 2004, Haiti faced a coup against its President, Jean-Bertrand Aristide, led by Guy Philippe, a former police officer who Human Rights Watch said had overseen unlawful killings. In 2016, Philippe won a Haiti Senate seat but was then sentenced to 9 years in prison one year later by U.S. authorities for charges of cocaine trafficking and money laundering.

In an unrelated matter last month, the former director of Haiti’s National Police, Godson Orelus, was arrested for gun-running (trafficking). So one can see that corruption runs deep in the heart of Haiti on many levels of government.

This current political crisis can be traced to the 2004 coup in #Haiti that ushered in more than a decade of instability & the chap. 7 @UN military occupation. Compounding this is the lack of legitimacy of @moisejovenel tainted by charges of election fraud & $$ laundering. pic.twitter.com/SWaCFHG09t

In regards to the Petrocaribe funds, an investigation by Haiti’s Senate found that at least 14 former government officials allegedly misused $3.8 billion under the administration of former President Michel Martelly.

The Senate released two separate Commission reports in which they further accused a dozen former officials ranging from previous governments led by presidents Rene Preval, under whom the program began of corruption as well, Miami Herald reported.

In essence, that’s money that could have helped the country rebuild after its devastating earthquake in 2010.

Those demonstrations began on July 6th when the Haitian government said that gas prices would be hiked up as much as 38 percent to U.S. $4.60 per gallon because the International Monetary Fund, a major Haitian creditor, recommended ending petroleum subsidies, Straits Times reported.

More recently, Associated Press reported that on October 17th and 18th was when things started to inflame again after calm when both civilians and officers were injured, including 2 people killed during demonstrations protesting Petrocaribe. The officers fired at protesters when they were hit by “flying rocks” according to police spokesman Michel-Ange Louis-Jeune.

Although, Saint-Marc Deputy Mayor Frantz Ulysse disputed that claim and said that “police opened fire to clear a road for a presidential motorcade as the government commemorated the death of its independence hero Jean-Jacques Dessalines,” according to AP.

That’s not the only thing being disputed; the Haitian National Police reported six people were killed, five wounded and twenty protesters arrested. The organizers of the protests reported 11 dead, 45 wounded and 75 arrests according to Radio Television Caraibes.

The Haiti Project asserts that Haitian political movement has been building since the incident on October 17th and then subsequently more after a follow-up attack on a funeral of the victims of the October 17th murders. The Twitter account further added that other factors included the massacre in La Saline on Nov. 11-13th, and then finally the killings last Sunday on November 18th by mercenaries and police backed by the UN.

As funeral began church was full & many mourners were on the street in front. Suddenly and without warning a police car opened fire as it sped by the crowd outside. This was followed by an unmarked Toyota Landcruiser associated with govt service vehicles. https://t.co/Ru3ZoET7Ue

Protesters are using traditional methods like blocking roads and burning tires to bring attention and demand more transparency in how the government uses its funds, as well as pushing for the resignation of the current President.

For the past week starting last Sunday, things seem to have escalated with numerous deaths being reported, including a government vehicle ramming into protesters, killing 6 people; and tourists and kids found dead who were arrested during the protest on Oct 17th-18th.

Bodies of three young militants arrested by police on Harry Truman Blvd. during Oct. 17 protest were found today in Drouillard on outskirts of #Haiti's capital. pic.twitter.com/ld5R3hzSkR

4th day since killing of protesters last Sunday. Estimated nearly 2/3 of Haiti, including Port-au-Prince, is paralyzed due to active resistance against the govt. The killings & coordination between @UN, #Haiti's police & foreign mercenaries has only strengthened opposition. pic.twitter.com/vf2fZkibRi

Following last Sunday’s protests, several opposition groups have called for a general countrywide strike to demand Moïse’s resignation and an investigation into misuse of funds in Petrocaribe, including a company owned by Moise. Moise has also been accused of election fraud and money laundering to top it all off.

This would be the 6th day since protests began in the country. Reports stated further protests were planned for today (Friday.)

“We are not interested in negotiating,” Andre Michel, an attorney and one of the president’s most vocal opponents said. “Today, the only option that exists for democracy is to continue to pursue mobilization for Jovenel Moïse to resign so that we can hold a national conference, and all sectors can sit and construct another state, another country in the interests of all Haitians.”

“A president has to show that he had heard the people,” Michel added. “The president has not heard the message of the population, which is one, to resign and the other, to begin the process of the Petrocaribe investigation.”

#Haiti's police just attacked the protests once again! People are scattering trying to get away from teargas and gunfire. They sing continue to sing for the president's resignation as they flee. pic.twitter.com/4p0ZgKsFvk

This comes, unfortunately, after Haiti was shaken by an earthquake just last month. Many are echoing the sentiments of “pray for Haiti” as the whole world watches the Haitian government’s response to these democratic protests against the sitting Moise regime.

Moise tweeted in good faith that his administration would determine who was responsible, calling for an investigation into those involved who misused funds.

“No one will escape justice,” he wrote. “It’s a moral and judicial duty.”

It’s worth noting that the judge who was originally involved in looking into misuse of those funds, Judge Jean Serge Joseph, had a suspicious death and was investigating Michel Martelly’s wife Sophia and their son Olivier who at the time were being accused of corruption, money laundering, abuse of authority and squandering funds from the public treasury. A Canadian coroner, Jean Brochu, concluded the probable cause of death of judge Joseph was cerebral hemorrhage, noting that nothing popped up in toxicology tests.

The Trump administration has expressed support for Moise, which essentially downplays democratic protests against the sitting President in Haiti.

In a statement from the U.S. Haitian embassy, the U.S. wrote,

The United States supports the human rights of people everywhere to freely express themselves and peacefully protest, and supports the Haitian government as it safeguards both those rights, and the security of public and private property.

That statement further commended the “professionalism demonstrated by the Haiti National Police in maintaining security and preserving public order on November 18, and in the days before and after.” Almost completely ignoring the murders and blood on the hands of the Haitian government, if not for the next sentence offering “condolences to the families and friends of the victims who have lost their lives.”

U.S. President Trump previously allegedly called Haiti one of many nations including African nations a “shit hole country” numerous times including during his 2016 campaign.

Feature image caption and credit: A police officer walks through the parking lot of the Delimart supermarket complex, where vehicles sit charred and looted merchandise lies scattered after two days of protests against a planned hike in fuel prices in Port-au-Prince, Haiti, Sunday, July 8, 2018. Government officials had agreed to reduce subsidies for fuel as part of an assistance package with the International Monetary Fund, but the government suspended the fuel hike after widespread violence broke out. (AP Photo/Dieu Nalio Chery)