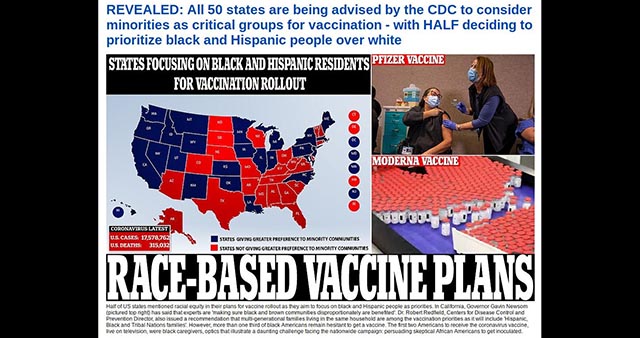 Is this what they call “systemic racism”?

From The Daily Mail, “REVEALED: Every single US state is being advised to consider ethnic minorities as critical groups for vaccination with HALF prioritizing black and Hispanic residents over white”:

Every US state has been advised to consider ethnic minorities as a critical and vulnerable group in their vaccine distribution plans, according to Centers for Disease Control guidance.

As a result, half of the nation’s states have outlined plans that now prioritize black, Hispanic and indigenous residents over white people in some way, as the vaccine rollout begins.

According to our analysis, 25 states have committed to a focus on racial and ethnic communities as they decided which groups should be prioritized in receiving a coronavirus vaccine dose. These include New Mexico, where collaboration with Native Americans is being prioritized; California, which has committed to ensuring black and Hispanic people have greater access to the vaccine; and Oregon, where health officials have said that ethnic minorities with have ‘equitable access’ to the shot.

Some states have made even more specific plans to prioritize communities of color, with 12 states specifically mentioning efforts to partner with healthcare providers in areas with a large minority population to reach ‘diverse populations’, according to Kaiser Family Foundation.

I have zero interest in taking this vaccine but nonetheless this is setting a remarkable precedent.

White people, whose taxes disproportionately paid for this vaccine to be developed, are being sent to the back of the line when it comes to receiving the final product.

How long will it be before White people are denied other medical treatments just because of their race?

The New York Times earlier this month ran an article, which may have influenced the CDC’s decision, saying older populations are “whiter” and therefor need to die to “level the playing field.”

Polls show most Black Americans are not interested in taking this vaccine. Part of me wonders if this is being done to drive up demand for the shot by making Whites feel like they’re being deprived and Blacks feel like they’re getting some form of reparations.

Meanwhile, what’s going to happen when the grade ≥3 side effects start hitting the Black community?

Are White people going to be accused of taking part in another “Tuskegee experiment”?