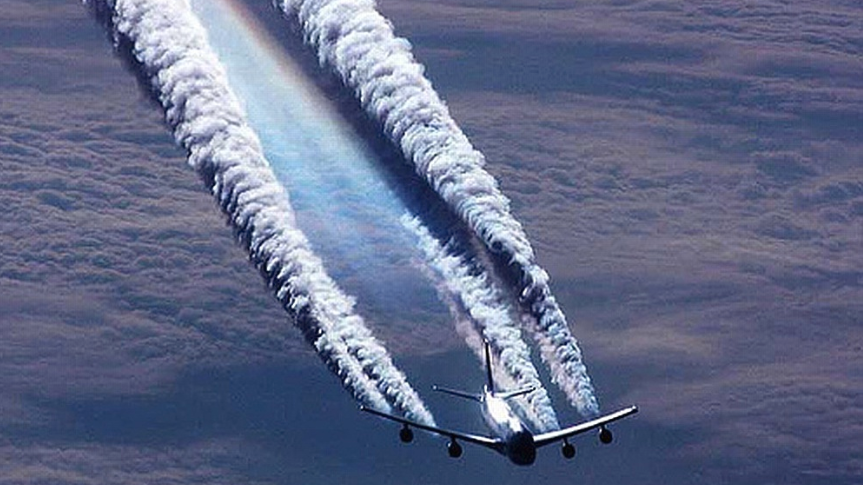 Despite the exposing of the global warming and climate change hoax, complete with the revelation that “studies” were falsified and manipulated, there are still people pushing the hoax. Now, there are scientists at Harvard University who want to fight the mythical “global warming” by flying at least 4,000 missions per year and dumping particles into the stratosphere. Anyone wanna guess what this is going to cost us besides health issues?

The following is an article written by Barry Brownstein, professor emeritus of economics and leadership at the University of Baltimore and author of The Inner-Work of Leadership, at Foundation For Economic Education, which explains this ridiculous notion that man thinks he is in control of the Creation rather than the Creator.

Harvard’s Gernot Wagner wants to save the world from global warming. His method? Develop a new type of plane that will fly more than 4,000 missions a year dumping particulates into the stratosphere.

Estimates for SAIL’s design and operation seem sophisticated but are fabricated. Wagner and Smith admit, “No existing aircraft design—even with extensive modifications—can reasonably fulfill [their] mission.”

Wagner and others believe that scientists can calculate how many particulates will be needed to cool the Earth to a desired temperature.

Wagner and Smith are not alone in their geoengineering dreams. As early as 2006, Paul J. Crutzen, Nobel laureate in chemistry, called for “stratospheric geoengineering research.” Harvard professors David Keith and Frank Keutsch hope to experiment via balloons spraying “a fine mist of materials such as sulfur dioxide, alumina, or calcium carbonate into the stratosphere.” Wagner, Keith, and Keutsch are all part of the Solar Geoengineering Research Program at Harvard.

Spraying aerosols in the stratosphere would “mimic what large volcanoes do.”

In 1815, Mount Tambora in Indonesia erupted, spewing “millions of tons of dust, ash, and sulfur dioxide into the atmosphere, temporarily changing the world’s climate and dropping global temperatures by as much as 3 degrees.” As the particulates moved around the global atmosphere, “1816 became the year without a summer for millions of people in parts of North America and Europe, leading to failed crops and near-famine conditions.”

No doubt, Wagner and others will tell you careful calculations will limit global cooling to just the right degree. Skeptics might conclude otherwise: scientists blinded by unlimited hubris are partnering with crony capitalists to threaten humanity.

In his book The Fatal Conceit

, F.A. Hayek observed, “The curious task of economics is to demonstrate to men how little they really know about what they imagine they can design.” Is Hayek’s statement equally applicable to scientists imagining they can safely modify the biosphere?

Regardless of your beliefs about global warming, Nassim Taleb’s “precautionary principle” would rule out plans altering the biosphere. Taleb writes:

The precautionary principle (PP) states that if an action or policy has a suspected risk of causing severe harm to the public domain (affecting general health or the environment globally), the action should not be taken in the absence of scientific near-certainty about its safety.

Learning How Little We Know

In the late 1980s, outside Tucson, Arizona, scientists built a closed ecosystem (all food and water had to be obtained from inside the dome) to replicate the Earth’s biosphere. Eight humans resided in the biosphere for a short period of time. Not long into the experiment, project organizers had to open the sealed doors of Biosphere 2: “Oxygen levels got so low halfway through the first year that they had to put more in over fear for the safety of the Biosphere residents.”

John Adams, deputy director of Biosphere 2, clearly states the takeaway: “What they did learn, and in my opinion the single most important lesson, was just how little we truly understand Earth’s systems.” I suspect that Wagner won’t be calling Adams soon.

If you think Wagner’s plan to cool the atmosphere by mimicking the effects of volcanoes is bonkers, consider the Atlantropa project—”the craziest, most megalomaniacal scheme from the 20th century that you never heard of.”

Sörgel imagined the dams would produce almost unlimited energy and the reclaimed land used for farming. World peace would reign when Europe and Africa were linked as a giant continent—Atlantropa.

Sörgel’s mad scheme had the enthusiast support of many expert engineers and the German public.

Yet, problems with Sörgel’s mad scheme were endless. An enormous amount of concrete would be required to build a dam across the Strait of Gibraltar. If the dam would fail, millions might die by floods. As for the reclaimed land, salt left behind on the seabed would prevent farming and turn the land into a desert.

Herman Sörgel’s crazy scheme is not so different from Gernot Wagner’s—both imagine they know how our biosphere works. In Sörgel’s case, dams would have altered the Gulf Stream with catastrophic global cooling the result.

Without government support, Sörgel had no power to impose his crazy dream on others. Humanity averted disaster when the Nazis rejected Sörgel’s engineered “utopia.” In another instance, the Soviets were not as lucky.

How Communists Destroyed the Aral Sea

Consider the Aral Sea. The Aral Sea—once the fourth largest body of water on the planet—is now a vast wasteland that has shrunk to less than 25 percent of its former size.

The Aral Sea in Uzbekistan (formerly part of the Soviet Union) stands as a tragic monument to the environmental carnage that often occurs under socialism. How could this have happened? Was it a change in weather? No, the destruction of the Aral Sea was the consequence of the Soviet decision to divert waters that flowed into the Aral Sea to irrigate land for cotton farming.

In their book World Politics: International Politics on the World Stage

, John Rourke and Mark Boyer write of the Aral Sea:

Then, beginning in the 1960s, Soviet agriculture demands and horrendous planning began to drain water from the sea and from the two great rivers that feed it (the Amu Darya from the north and the Syr Darya from the south) faster than the water could be replenished.

The sea started to shrink rapidly. As it did, the level of its salinity rose, and by 1977 the catch from the once-important fishery had declined by over 75 percent. Still the water level continued to fall, as the sea provided irrigation for cotton fields and for other agricultural production. The same Soviet planning that brought the world the Chernobyl nuclear plant disaster in Ukraine, stood by paralyzed as the Aral Sea began to disappear before the world’s eyes.

Now, in reality, geographical name Aral Sea is a fiction, because it has shrunk in size and depth so much that a land bridge separates the so-called Greater Sea to the north from the Lesser Sea to the South. What was a single sea has lost 75 percent of its water and 50 percent of its surface area in the past 40 years. That is roughly equivalent to draining Lake Erie and Lake Ontario. The Uzbek town of Munak was once the Aral Sea’s leading port, with its fishermen harvesting the sea’s abundant catch. Now there are few fish, but even if there were many, it would not help the people of Munak. The town is now in the middle of a desert; the shoreline of the Lesser Sea is 50 miles away.

Let’s put all of this together. Human hubris and madness will always exist. Scientists can dream of controlling the uncontrollable, but they need an agent of coercion to implement their dangerous schemes. Their tool of coercion can only be government.