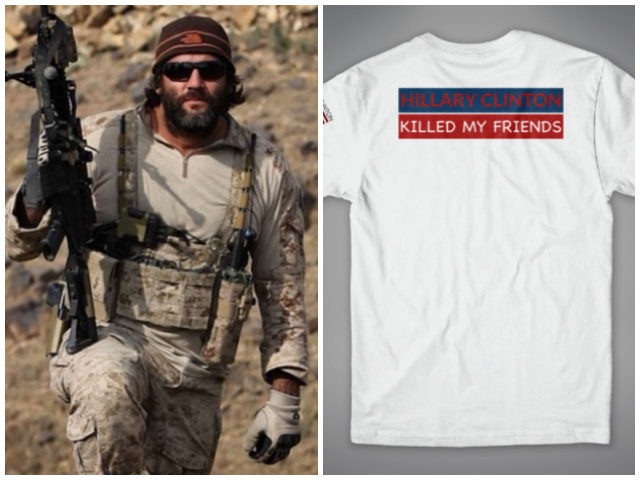 A former Navy SEAL who was mentored by Benghazi hero Woods and was a roommate with CIA contractor and Benghazi hero Glen Doherty in Afghanistan, both of whom were killed in the attack on the US compound in Benghazi on September 11, 2012, took to Fox & Friends to promote his “Hillary Clinton killed my friends” initiative. This is a flashback to just prior to the 2016 elections.

The short clip from Real.video shows the interview with Gill.

Gill believes that Hillary Clinton is fully responsible for Woods’ and Doherty’s deaths.

As a result, he started Project War Path, a combat veteran owned and operated company that sells Black Rifle Coffee, as well as t-shirts and bumper stickers emblazed with the phrase, “Hillary Clinton killed my friends.”

Gill said that security of the ambassador and the compound in Benghazi was solely her responsibility.

“The terrorists literally pushed the gate in, opened it, and walked in,” he added. “The security there was local security. They weren’t trained, they weren’t vetted, they didn’t have American supervisors. They just threw down their guns and walked away when the attacks started. So my friends down the street at the CIA annex, they had to rescue the State Department folks, and they lost their lives that night when they were in the fight of their life.”

Gill was asked about the “controversial” nature of the message on his products, and he said that he’s had nothing but positive response.

Gill also said that the military already despised Hillary Clinton going into the 2016 election. He believes almost no one wanted to serve under Clinton should she have gained the White House.

“They don’t want to do it, but you know they will,” Gill said.

The book 13 Hours and the movie by the same name gave a clear understanding of the truth of what Gill said. There is no doubt that the State Department was either completely incompetent or decisively negligent concerning the security of the compound and its ambassador. As a result, America lost two Navy SEALS, an ambassador and an information management officer, as well as a coverup ensued at the highest levels of America’s government to conceal the fact that an Islamic jihad attack had occurred, and Americans were dead because of the actions of the Obama-Clinton State Department.