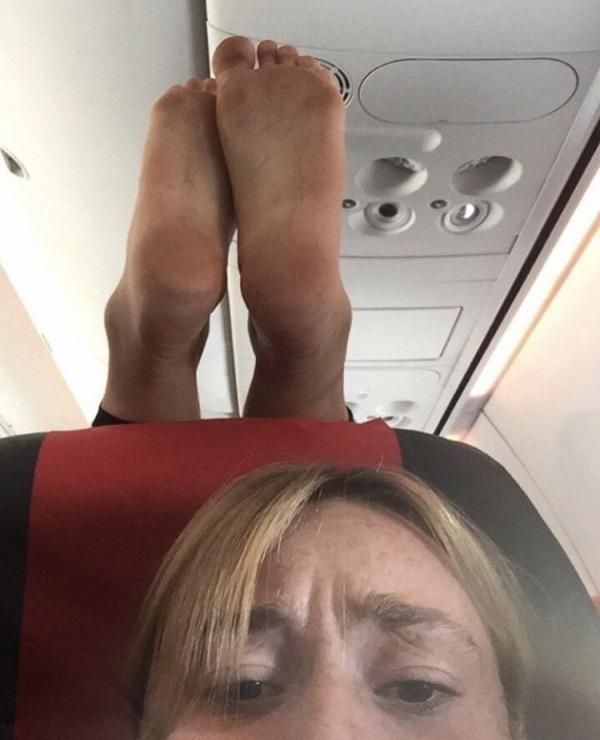 It is getting scary out there. In order for society to function properly, we need to be able to assume that most people are going to behave rationally. And when I was growing up, it was generally safe to make that assumption. But now things have completely changed. No matter how hard one may try, there is simply no avoiding the hordes of crazy people that seem to be taking over our society. It is almost as if millions of us never learned the basic rules for how civilized people should treat one another. Sometimes this manifests in behavior that is simply rude, other times it manifests in behavior that is actually dangerous, and if you are really unlucky you will personally encounter someone that has fully embraced depravity on a level that most of us never even want to think about.

Let me give you an example of crazy behavior that is simply rude. Not too long ago, a Reddit user posted a photograph that really freaked a lot of people out…

A female plane passenger took to Reddit this week to share a horrifying photo of a stranger performing a rude act during her flight.

The woman, who goes by WoodySoprano on the social media platform, posted an image of a traveler resting their bare feet on her headrest. Though the Reddit user’s face is cropped, her terrified eyes tell all.

“Going to be a long flight,” she captioned the photo.

This woman was never in any physical danger, but this type of behavior is incredibly rude.

Of course sometimes crazy behavior does cross the line and actually becomes dangerous. For example, just consider what recently happened to one woman in Los Angeles…

Heidi Van Tassel was parked in Hollywood after having a pleasant evening out with friends at an authentic Thai restaurant. Suddenly a man randomly pulled her out of the car, dragged her out to the middle of the street, and dumped a bucket of feces on her head, Van Tassel said and public records confirm.

“It was diarrhea. Hot liquid. I was soaked, and it was coming off my eyelashes and into my eyes,” Van Tassel said. “Paramedics who came to treat me said there was so much of it on me, that it looked like the man was saving it up for a month.”

Nobody in their right mind would dump a bucket of warm diarrhea on some random woman.

But if you visit the major cities on the west coast, something like this could actually happen to you. In San Francisco alone, there have been more than 132,000 official complaints about human feces in the streets since 2008.

We have literally become a nation where hordes of people use the streets as a toilet.

What in the world has happened to us?

And if you are brave enough to go get something to eat at a local fast food restaurant, there is a chance that you might be viciously attacked by a complete nutjob…

A woman has been sentenced to seven years in prison for slashing a man’s throat in front of his family at a Taco Bell after he asked her to stop ranting at employees for taking too long on her food.

The victim, 48-year-old Jason Luczkow, told The Oregonian Thursday that he and his wife went to a Taco Bell along Highway 26 in July to pick up some food for the family when the errand took a horrifying turn, which was miraculously caught on video.

Have you noticed that people seem to get “triggered” a whole lot more easily than they once did?

These days, saying the wrong thing to one of these crazy people at the wrong time can result in violence very quickly…

A Twitter user received over 126,000 ‘likes’ after she bragged about stealing a “homophobic” white woman’s purse and spending her money on tacos.

“A white woman spawned out of nowhere today and started being homophobic to me so I stole her purse and now miss thing’s ID is resting in a target trashcan and her money is paying for my tacos and rent,” tweeted a user called @yourholygaymom, who describes herself as “the high priestess of gay twitter.”

The most frightening thing about that story is the fact that more than 126,000 people decided to hit the like button.

Like I said, the crazy people are literally taking over our society.

Those of us that try to behave rationally still depend on the police to protect us, but the crazies are going after them too…

Video posted by CBS shows people deliberately covering an NYPD vehicle in trash on Halloween night, while a small group of residents sit by, laugh, and taunt the two officers that were left to clean up the mess.

One resident is heard saying “trick or treat”, followed by a slur.

The officers calmly show restraint as they are left to clean up trash filled boxes, broken eggs and rotting food. The officers were in the midst of responding to a domestic dispute call and were upstairs at a residence long enough for their vehicle to be vandalized.

It certainly isn’t easy to be a police officer these days.

If those officers had lashed out against the residents that vandalized their vehicle, they would have probably been demonized by the mainstream media for committing “police brutality”.

And as I mentioned above, once in a while you run into a crazy person that has completely embraced depravity.

In New Jersey, authorities recently arrested a man that was ““harassing people who refused to let him have sex with their farm animals”, and Vice Media recently showcased a program about people that “incorporate insects into their sex lives”.

Yes, this is what our society is actually becoming.

There are certainly a lot of factors, but two of the biggest are the fact that we have completely turned away from the moral standards that this nation was founded upon and instead we are constantly filling our minds with complete and utter filth.

Today, the average American spends more than three and a half hours watching television each day, and the material on our televisions is becoming increasingly depraved…

A new study has a message for the many families who have said television content has grown coarser with each passing year: You’re right.

The study by the watchdog group Parents Television Council found a 28 percent increase in violence and a 44 percent increase in profanity over the past decade in shows rated TV-PG. It’s part of what the PTC calls “content creep” – that is, an increase in offensive content within a given rating compared to similarly rated programs a decade ago.

Unfortunately, the trends that are causing all of this crazy behavior in our society are likely to continue to intensify in the years ahead.

The thin veneer of civilization that we all rely on every day is steadily disappearing, and that means that things are going to become increasingly difficult for those of us that are still trying to behave rationally.