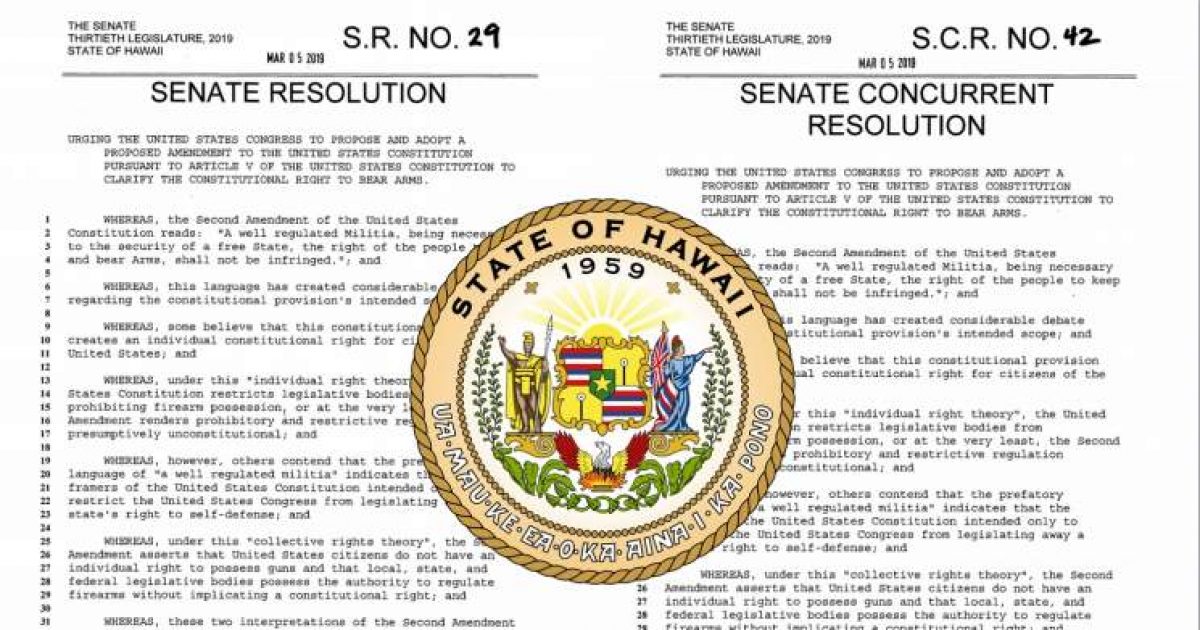 I don’t know where these people come from but “rights” are not repealable. They are “unalienable,” which means they can’t be given up nor taken (Only cowards acquiesce to either of those). Yet, here are cowardly tyrants in the state of Hawaii introducing resolutions that encourage Congress to violate the Constitution and the rights of the people, the very thing they took an oath before God and man to uphold.

Hawaii state senators, all of them Democrats, introduced Senate Resolution 29 and Senate Concurrent Resolution 42, both of which conclude with these lines:

Unbelievable! The senators of Hawaii have just declared war on the united States, its Constitution and its people and should summarily be arrested for undermining the very law they swore to uphold.

This proposal to deny Americans their right to posess firearms underscores the serious dangers of amending the federal Constitution in this current age. And although neither resolution is an application to Congress to call a convention for proposing amendments, also known as a “convention of states” or constitutional convention (Con-Con), under Article V, they offer a preview into the type of amendments that a Hawaii delegation to such a convention would propose, should one be called by Congress.

In fact, Hawaii lawmakers have already suggested a convention to propose, among one of its aims, an amendment to do just that. In 2012, liberal Democratic state legislators introduced House Concurrent Resolution 114, a radical leftist Con-Con application that sought to repeal the Second Amendment, declare ObamaCare to be constitutional, and to abolish the Electoral College. The key excerpts from Hawaii’s HCR 114 (2012) read:

Whereas, the Legislature supports the proposal and ratification of the following amendments to the United States Constitution:

(1) The repeal or modification of the Second Amendment to strengthen firearms restrictions;

(2) A declaration of the constitutionality of the federal Patient Protection and Affordable Care Act, including the individual mandate requiring the purchase of health insurance;

(3) An amendment to Article I, Section 5, to prohibit the supermajority cloture requirement under Rule 22 of the United States Senate for ending floor debates and filibusters, to facilitate a more reasonable voting standard for cloture;

(4) An amendment abolishing the electoral college established under Article II, Section 1, and providing for the direct election of the United States President and Vice President by voters; and

(5) An amendment to Article II, Section 2, Clause 2, to require that Senate confirmations of appointments of officers of the United States be made by a simple majority vote within sixty days of the nomination….

BE IT FURTHER RESOLVED that this Concurrent Resolution constitutes a continuing application in accordance with Article V of the United States Constitution until at least two-thirds of the legislatures of the several states have made application for a constitutional convention that is limited to consideration of the amendments to the United States Constitution enumerated in this Concurrent Resolution. (Emphasis added throughout.)

Fortunately, HCR 114 failed to pass in 2012. However, like both SR 29 and SCR 42 of 2019, it also reveals just how far some on the Left are willing to go to eviscerate our constitutional freedoms. One should not expect liberal delegates to an Article V convention — especially coming from stronghold “blue states” such as Hawaii, California, New York, New Jersey, Connecticut, Rhode Island, Massachusetts, Oregon, and Washington — to sit idly by as purportedly conservative Republicans make changes to the nation’s law of the land. In fact, even the so-called conservatives at Mark Meckler’s Convention of States Project/Action organization, also known as COS, may not be reliable guardians of the Second Amendment.

These aren’t the only lawless tyrants who have advanced this idea. We have had all sorts of past and present politicians who have pushed for outright gun confiscation to what they call “common sense” regulations, which are actually stupid.

And yet, she blurts out the truth in 2017, she admits that no guns laws can stop mass shootings or any gun crime for that matter.

Then there was “relic of the twentieth century,” former Supreme Court Justice John Paul Stevens who wrote that the Second Amendment should be repealed because it was a “relic of the eighteenth century.”

These people have no idea why the Second Amendment was written, no idea that corrupt men and governments will continue to exist to advance tyranny and arms a means of the people keeping them in check, not to mention the defense of their persons, families, and communities.

The John Birch Society put out a video titled “Tricked Into Gun Control,” which demonstrates that the idea of “clarifying the Second Amendment” is just another way of attempting to create outlaws out of law-abiding citizens and leads to gun confiscation.