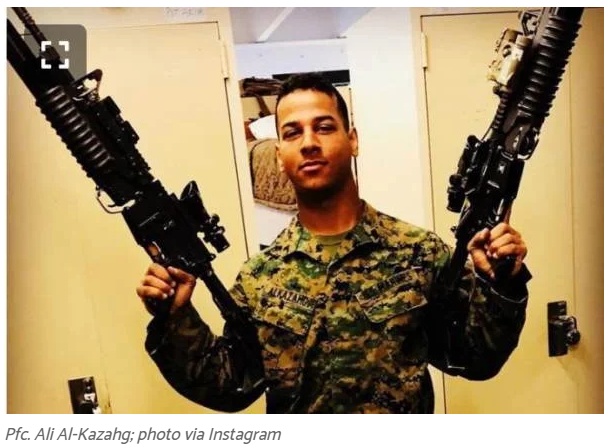 Pfc. Ali J. Alkazahg, 22, of Milford, was arrested on May 31 after he attempted to enter the Offutt Air Force base with two semi-automatic rifles, a pistol and a silencer while wearing body armor.

According to reports, Al-Kazahg was on a watch list after he made “suspicious statements” and had previously been reported for “suspicious activity.”

He told a fellow Marine that he would “shoot up the battalion, starting at the barracks,” if he were disciplined for certain misconduct.

Al-Kazahg even specifically mentioned the names of Marines he wanted to target.

Following his arrest, Alkazahg was transported by Naval Criminal Investigative Service to Hawaii, where he has been placed in pretrial confinement, Capt. Eric Abrams, a spokesman for III Marine Expeditionary Force, told Marine Corps Times. The Marine hasn’t been charged at this time and the Corps wasn’t able to provide further details.

NCIS said it is investigating the incident.

The Omaha-World Herald reported that security guards stopped Alkazahg’s pickup truck at the Offutt security gate after seeing his name on a law enforcement watch list.

“The Marine Corps takes every accusation against its Marines seriously and holds them accountable to our core values of honor, courage and commitment,” Abrams said.

He was on leave from his duty station in Hawaii at the time of his arrest.