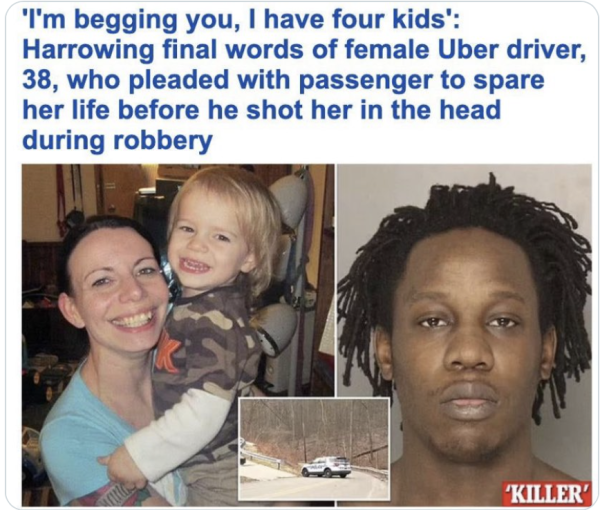 Were America a nation truly in a vise of white supremacy, systemic inequality, and implicit bias, then the story of what happened to Christina Spicuzza would be the only news item being discussed by every media outlet in America. “‘I’m begging you, I have four kids’: Harrowing final words of female Uber driver, 38, who pleaded with passenger out on bail to spare her life before he fatally shot her in the head during robbery.”

Let those words settle in for a moment.

Her name is Christina Spicuzza, a white female and mother of four children.

This is the true absurdity of life in Black-Run America (BRA), where a white mother of four spent her final moments alive pleading with a black career criminal not to kill her, when had she simply refused to pick him up, Uber would have fired her because she wouldn’t drive a black male.

Instead, her four children now have to know they’ll never hug their mother again. [Criminal complaint details what led to arrest of Penn Hills man in death of Uber driver: Twenty-two-year-old Calvin Crew has been charged with homicide in the death of 38-year-old Christina Spicuzza of Turtle Creek., WTAE.com, February 18, 2022]:

A criminal complaint details what led to the arrest of a Penn Hills man accused of shooting and killing an Uber driver in Monroeville.

Calvin Crew, 22, has been charged with homicide in the death of 38-year-old Christina Spicuzza of Turtle Creek.

Spicuzza was reported missing by family members after they didn’t hear from her while she was working as an Uber driver.

According to the criminal complaint, she was found lying face down and was wearing a COVID-19 face mask. Police said one 9mm casing was found behind her.

While on the scene, investigators learned that she was reported missing by her boyfriend on Feb. 11. She was working as an Uber driver on Feb. 10 when he had last heard from her.

Investigators also learned that her car was found earlier that day in Pitcairn.

While interviewing Spicuzza’s boyfriend, the criminal complaint said he told officers that he had purchased a dash camera for Spicuzza and it is normally inside her vehicle.

Police said when they searched her vehicle, the camera was not in its usual place.

Police then contacted Uber to obtain trip information for Spicuzza. It was learned that her last completed trip began at 9 p.m. Feb. 10 from Brinton Road.

On Feb. 12, police said they were contacted by a person who was working along the railroad tracks beneath the TriBoro Expressway. The person found a pink cellphone with a cracked screen. The phone was determined to be Spicuzza’s.

Police then checked license plate readers for Spicuzza’s license plate numbers and found several “hits,” with someone along the TriBoro Expressway.

Detectives were then able to download Spicuzza’s cellphone and learn the locations she traveled. They also were able to find out when her phone stopped tracking new locations.

On Feb. 14, detectives in Penn Hills contacted a woman, later identified as Crew’s girlfriend, and asked to speak with her. When she arrived at the Penn Hills police station, she was with her boyfriend Calvin Crew.

The criminal complaint said Crew’s girlfriend told detectives that she was in Swissvale on Feb. 10 when she got a call from Crew asking her to order an Uber for him. She said Crew gave her an address to enter into the ride request.

In another interview with Crew’s girlfriend, police said she told them she purchased a 9mm gun at a store in McKeesport and it went missing. She said she never reported the gun missing/stolen.

The criminal complaint also said she told investigators that she had a feeling that Crew had her gun because he was the only person around her. When police went to retrieve the gun box and paperwork from her home, both were missing.

During an interview with Crew, police said he told them he got out of the Uber after the trip was completed then walked to the bus station in Wilkinsburg and took the Trafford bus to Pitcairn.

Police later reviewed the surveillance camera from the bus station and did not see anyone matching Crew’s description.

On Feb. 17, detectives were canvassing an area in Penn Hills when a detective found the dash camera that was missing from Spicuzza’s vehicle.

The camera was found one-tenth of a mile from where Crew requested the Uber, police said.

A mini-SD card was found inside the camera and police were able to view the footage from the card.

The video recorded from the front and rear of the camera and also records audio from inside of the vehicle.

While reviewing the video, police observed the following at the listed times:

21:33:28: We are able to hear the Uber application announcing, “Drop off Tanaya”

21:33:45: Crew produces a firearm from his right side and leans forward toward Spicuzza

21:33:49: Crew states, “Keep driving”; Crew then places the firearm at the back of Spicuzza’s head, with the firearm being in his right hand

21:33:51: Spicuzza reaches up with her right hand and touches the gun. Spicuzza then says, “You’ve got to be joking”

21:34:10: Crew says to Spicuzza, “Complete the trip”; He repeats this statement numerous times to her

21:34:42: Crew reaches forward with his right hand and grabs Spicuzza’s cellphone off of the front dashboard

21:34:48: Crew reaches forward with his right hand and grabs the dash camera. The video then ends.

An arrest warrant was then issued for Crew.

Crew is charged with criminal homicide, robbery and tampering with evidence.

Were America a nation truly in a vise of white supremacy, white privilege, systemic inequality, and implicit bias, then the story of what happened to Christina Spicuzza would be the only news item being discussed by every media outlet in America.

Instead, America is a nation where white people are second class citizens, who must take a back seat to a racial group who Corporate America and our government deems our greatest asset and resource. Christina Spicuzza should have been at home with her children, not driving an Uber and picking up dangerous black career criminals. Our government should be rewarding productive members of society who wish to have large families, not creating a situation where a white mother of four must plead for her life as a black career criminal threatens to shoot her (which he eventually did).

Again, had Christina Spicuzza not picked up this black career criminal, Uber would have fired her for discrimination.

That’s black privilege in a nation we are told is dominated by white supremacy.