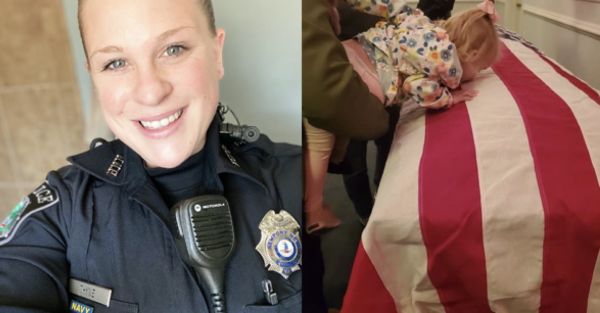 We all know the truth about white police and black criminals, with members of the corporate media still incredulous they do not go out on their beat with the stated of finding innocent black/brown bodies to target. [New Study Says White Police Officers Are Not More Likely To Shoot Minority Suspects, NPR, July 16, 2019]

White police officers have thankless jobs, each and every one knowing if they go out and duty and interact with the wrong black/brown person, their career could instantly turn out to be Darren Wilson-ed.

Or, they could also have the fate of Newport News Police Officer Katie Thyne. She was a 24-year-old white police officer, a mother of a two-year-old daughter.

No one will march in her memory. No one will dare threaten to burn down a city to avenge her death. She was a white police officer who was murdered by a black criminal (who should have been behind bars for his role in a bank robbery the federal government declined to prosecute).

Officer Thyne’s body cam horrifically captured her final moments, as her body was dragged by the car of the black man she was questioning.

One must wonder if this black criminal wasn’t prosecuted by the federal government out of some misguided belief too many blacks were in jail and criminal justice reform truly means being lenient on these unjustly arrested black/brown bodies..[Feds turned down robbery prosecution for man later accused of killing Newport News police officer, Daily Press, February 1, 2020]:

The 38-year-old man accused of dragging a rookie Newport News police officer to her death last week was out on bond in a 2016 bank robbery charge in North Carolina.

The U.S. Attorney’s Office in Raleigh turned down a chance to handle the armed robbery prosecution of Vernon Evander Green II, which would likely have caused him to be jailed pending trial. Green, of Newport News, stands accused in the Jan. 23 slaying of Officer Katherine M. “Katie” Thyne — the first Newport News police officer killed in the line of duty in more than 25 years.The top prosecutor for Elizabeth City, N.C., said this week that the U.S. Attorney’s Office in Raleigh told him four months ago that they were not taking the robbery case, although bank robbery is viewed widely as a federal crime.

Their decision to decline prosecution in this case was very disappointing,” said Andrew Womble, the district attorney who oversees state criminal prosecutions in Pasquotank County and six other northeast North Carolina counties.

If Green was being prosecuted federally rather than in state court, attorneys say, he would likely have been locked up awaiting trial. That’s because, unlike state law in North Carolina, there’s a strong presumption in federal law that defendants in armed robbery cases be held rather than getting bonded out.

Womble declined to tell the Daily Press what federal prosecutors told him in turning down the case in September. And Don Connelly, a spokesman for the U.S. Attorney’s Office in Raleigh, declined to shed light on why his office didn’t take the case.It was 10:13 a.m. on May 18, 2016 when a masked man walked into Select Bank & Trust, on a main drag in Elizabeth City, holding a handgun and a black duffel bag. He made off with $10,361 in cash.

The local newspaper in Elizabeth City, The Daily Advance, reported that the robber was last seen getting into a black Mercedes-Benz with tinted windows and a large decal on the rear window.

Investigators traced the 2004 sedan back to Vernon Green in Newport News. He was indicted in March 2018 on state charges of robbery with a dangerous weapon and possession of a firearm as a convicted felon.

In April 2018, the FBI and Elizabeth City police investigators set up a sting to arrest Green at the Newport News Probation and Parole Office, The Daily Advance reported. (He was on long-term probation stemming from a 2003 cocaine dealing and gun case from Newport News, according to records in Newport News Circuit Court).

Green was extradited to North Carolina and posted a $250,000 bond a month later, with no condition requiring him to remain in that state, according to Superior Court records in Elizabeth City.

The case was postponed several times over the past year, court records show. While some delays were for routine plea negotiations, a continuance in early September came because Green was a “federal target,” with the FBI looking into the case.

But in late September, federal prosecutors told Womble they were not going to take the case, with the case staying in state court.

Four months later, Green is accused of killing the 24-year-old Thyne — the mother of a 2-year-old girl and a former Navy petty officer who graduated from the Newport News Police Academy in June.

Just after 6:30 p.m. on Jan. 23, Thyne and another Newport News patrol officer were questioning Green on suspicion that he and a woman were smoking marijuana while sitting in the parking lot of Monitor-Merrimac Overlook Park on 16th Street.

Police said Green refused several demands to get out of the car, when he suddenly started up the vehicle and took off. Thyne — standing near the open driver’s side door at the time — became “trapped between the driver’s door and frame of the vehicle” as it fled from the parking lot, court records say.

The car jumped a curb near a tree about a block away, crashing into a small red brick wall in front of a home. At one point, Thyne was “pinned” between the car and tree, Police Chief Steve Drew has said.Thyne, found in the street near the tree, was pronounced dead about an hour later. The State Medical Examiner’s Office in Norfolk said she died of “multiple blunt trauma.”

A black career criminal who should have been in jail, save for the federal governments inexplicable leniency, murdered a white female cop after he refused to comply with her questions.

Outside of Newport News, Virginia, few will learn of Officer Katie Thyne’s fate, or find out she leaves behind a two-year-old daughter.But we will ceaselessly be bombarded with the message from corporate media this Black History Month of the evil of white police officers and how they unfairly target innocent black people 24/7/365 all across this nation.

If the feds refused to prosecute your black murderer’s armed robbery charges (that would have kept in him jail) over concerns of targeting another black criminal, we can chalk up your unnecessary murder to not just political correctness, but the next frontier of civil rights — a crime entitlement program for black people.