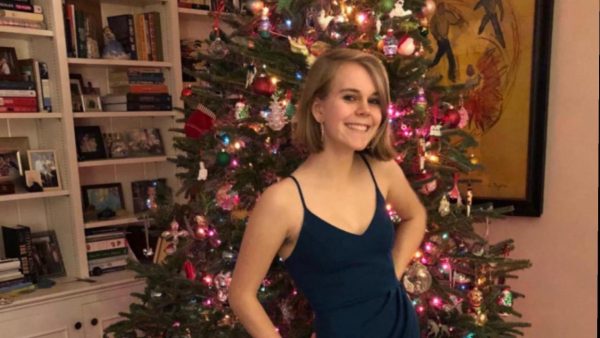 What are the elites in New York City trying to cover up? They’ve already dubbed it a “robbery gone wrong.”

“Thou shall not promote black-on-white murders” is one of the main commandments the Society of Professional Journalists dictates as gospel. [Barnard freshman Tessa Majors’ fatal stabbing was caught on video, NY Post, December 17, 2019]:

Grainy surveillance video captured the robbery and fatal stabbing of Barnard College freshman Tessa Majors in Morningside Park, it emerged in a Tuesday court hearing for one of her alleged murderers.

A surveillance camera mounted atop a security booth near the entrance to the park was rolling as three alleged teenage muggers accosted and knifed Majors, 18, on Dec. 11, an NYPD investigator testified.

“It’s a pixelated video,” said Detective Wilfredo Acevedo, adding that the clip captured “a little scuffle at the bottom of the steps, and poking motions towards the victim.”

The video’s existence emerged in a Manhattan Family Court hearing for Zyairr Davis, 13, charged with felony murder in the case.

Davis, the only member of the trio charged thus far, has purportedly admitted to taking part in the robbery, but denied stabbing Majors, authorities have said.

Under questioning by Davis’ lawyer, Acevedo affirmed that the video does not show Davis lay a hand on Majors, while his two alleged accomplices, both 14, put Majors in a chokehold, robbed her and stabbed her.

One of the middle-schoolers was arrested last week but released as cops continue to build their case, while the other — believed to be the alleged stabber — jumped out of a carand fled on Monday while he was being driven to speak with cops, sources have said.

“He [Davis] observed one of the individuals reaching into the victim’s pocket and removing something,” testified Acevedo. “He said it was a plastic bag.

“He heard Ms. Majors yell for help and refuse to get robbed,” Acevedo continued. “She was just refusing to give up her property.

“He said one of the individuals had the knife and stabbed her.”

Prior to the robbery, Acevedo also testified, Davis allegedly saw one of the two other teens drop “a red-handled knife,” then picked it back up and handed it to them.

The murder weapon has yet to be recovered, according to police sources.

After being stabbed, Majors dragged herself up a flight of stairs and to a Columbia University security booth, where she collapsed and was found by a guard with what proved to be mortal wounds, sources said.

It wasn’t immediately clear whether that security booth is the one that holds the camera.

Judge Carol Goldstein ruled in the probable cause hearing that the case against Davis can proceed.

Davis, wearing a gray and black sweater, gray sweatpants and Air Jordan sneakers, said nothing but repeatedly bit his lower lip throughout the proceeding.

Tessa Majors, a white 18-year-old female, “fought back” against the three black teenagers who stabbed her to death (and yes, we will soon discover they were black).

That’s a lot more one can say about her will to live in the face of death than white conservatives who are being targeted for replacement by our elite in America, but are too afraid to say anything about it out of fear of being labelled a racist.