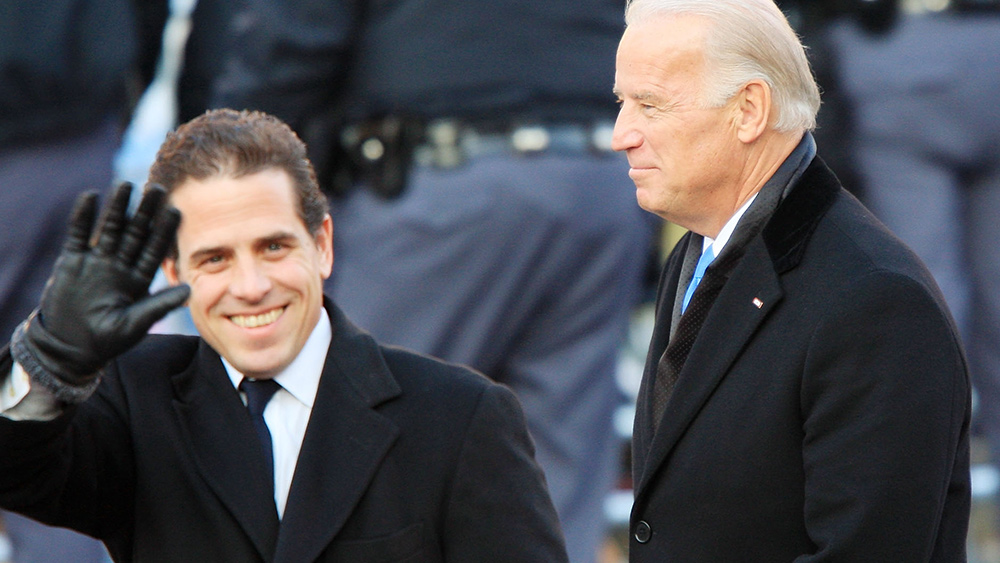 (Natural News) The ‘mainstream media’ is proving anew that it is corrupt and in the pocket of the Democrat Party by refusing to cover any of nearly a dozen new scandals involving first son Hunter Biden.

According to Newsbusters, which tracks left-wing media bias, “ABC, CBS and NBC’s evening and morning news programs continue to hold back from their audiences the latest shocking revelations surrounding Hunter Biden’s various scandals.”

The organization went on to note that the three major broadcast networks also ignored shocking claims by several FBI whistleblowers that top officials within the bureau told staffers and line agents ahead of the 2020 presidential election to downgrade and slow-walk the probe into Hunter Biden’s laptop, which contains one explosive revelation after another about his father, Joe Biden, and his crime-ridden family.

Also, the nets ignored Facebook founder and CEO Mark Zuckerberg’s admission to top podcaster Joe Rogan that the FBI advised the social media behemoth to censor and downgrade stories and posts about the laptop because it was allegedly “Russian disinformation” — a claim that turned out to be fabricated.

This, as a new poll found that 79 percent of respondents said they would ‘likely’ not have voted for Joe Biden if “truthful” coverage of his debased son’s laptop was done by the bulk of the mainstream media.

Because they are so in the tank for the Biden administration the broadcast networks remain stubborn in their refusal to report on evidence that links directly to the President himself like e-mails from Hunter’s laptop and White House visitor logs that disprove his claim he “never” spoke to Hunter about his “business dealings.”

The lack of Hunter scandal coverage is something NewsBusters has been tracking on an almost daily basis since March 16, when the New York Times finally confirmed that Hunter’s laptop is real and not an example of “Russian disinformation.” If the liberal broadcast networks were waiting for an all-clear to admit the explosive Hunter laptop story (that was first broken by the New York Post way back on October 14, 2020) was real and legitimate, that was it. That still hasn’t spurred them to cover the wayward son’s mischievous and criminal activities that could hurt the Biden administration.

In June and July, Newsbusters reported on more than a dozen Hunter Biden scandals that the networks and most cable news outlets ignored. But now, the media watchdog has identified 10 additional scandals the majority of deep state media are ignoring, including the massive Zuckerberg admission.

Here are some of the others:

— “Hunter Biden met with his father multiple times while working for a Romanian real estate tycoon accused of corruption — an effort that netted Joe Biden’s second son and associates “millions” of dollars, a source close to the arrangement told the New York Post,” the outlet that’s been on this story and the Bidens since from the outset.

— Separately, The Post also noted: “The computer repair shop owner who blew the whistle on Hunter Biden’s infamous laptop claims in a new book that an FBI agent threatened him to stay silent. John Paul Mac Isaac said two federal agents came to his Mac Shop in Wilmington, Del. in December 2019 to recoup the laptop following a subpoena, he details in his new book…”

— “Two Chinese businessmen with ties to Hunter Biden’s company met with Joe Biden at the White House and followed up with the VP’s son days later with a fawning email and invitation, records reveal,” the UK’s Daily Mail reported in August. “The meeting is the fifteenth to be uncovered between Joe and businessmen linked to Hunter.”

— “Hunter Biden failed to register as a foreign agent during years of overseas business dealings — a possible crime that could finally land him in prison, experts say,” the New York Post reported in July.

The Bidens are even more corrupt than the Clintons. But most Americans don’t know that because our media outlets are politically biased and corrupt.