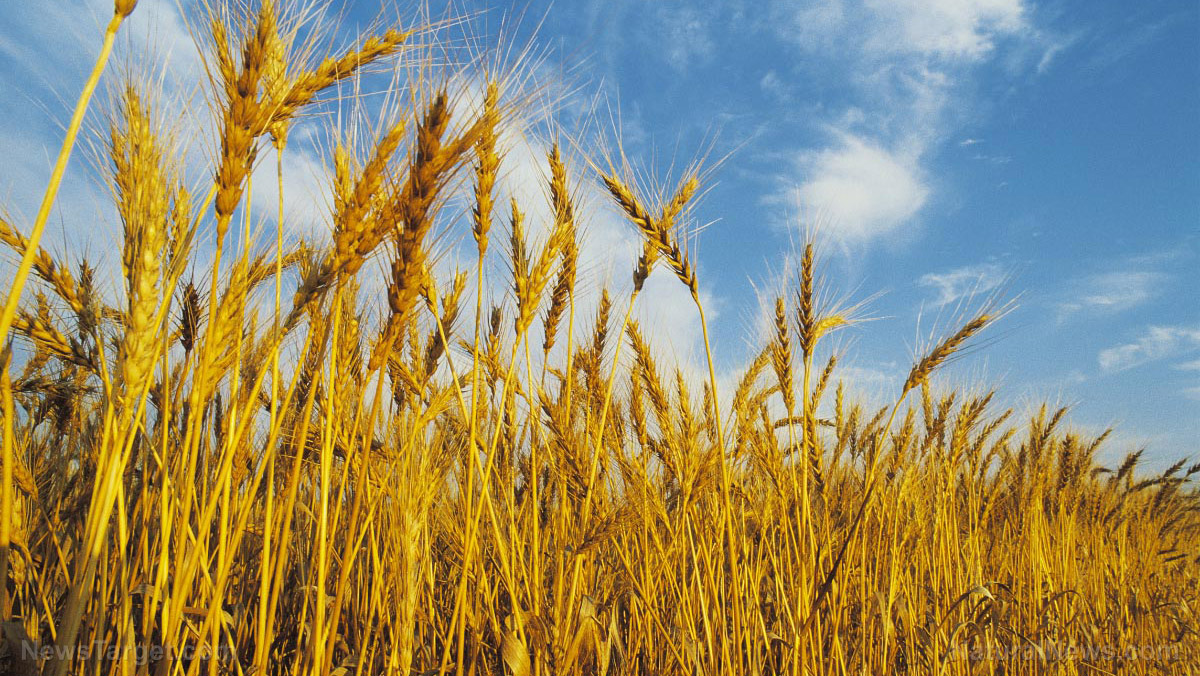 (Natural News) Wars, no matter how seemingly isolated they are from the rest of the world, have worldwide implications in the modern age because of the connectivity of the global economy, so it’s not surprising that Russia’s invasion of Ukraine is having adverse effects far beyond that region.

Already, countries are experiencing dramatic spikes in energy prices, given Russia’s status as a leading oil exporter; several countries have suspended imports of Russian oil as part of a sanctions regime instituted against the Kremlin and President Vladimir Putin as punishment for his actions.

But also both Russia and Ukraine are leading exporters of several commodities including fertilizer and grain, and the conflict is already taking its toll on the production and export of both, which will lead to hunger and food crises in several countries.

According to new Gallup data, the most vulnerable nations, of course, are those most reliant on wheat produced by Russia and Ukraine with large segments of their populations already struggling to afford food before the war broke out. In addition, several countries on the list including Egypt, Kenya and Turkey are also dealing with internal political instability and conflict, situations that only worsen when people go hungry. 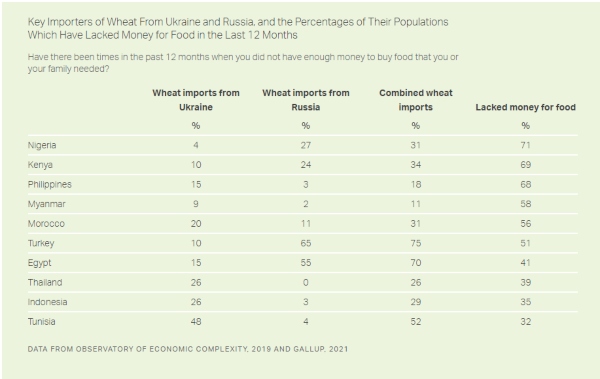 Nigeria, the Philippines, Myanmar, Morocco, Thailand, Tunisia and Indonesia also made the list, according to Gallup, but perhaps the hardest-hit country is NATO member Turkey.

“Turkey received a full 75% of its wheat imports from Russia and Ukraine in 2019, ranking it among the most dependent on sources from those countries. In 2021, a slim majority of Turks (51%) reported being unable to afford food in the past 12 months. Turkey’s current vulnerability may be further heightened by its lingering economic crisis and high levels of inflation,” the polling and data firm reported.

But Egypt will no doubt struggle as well, as it also imports nearly three-fourths of its grain from Ukraine and Russia.

“Egypt received 70% of the country’s grain imports from Russia and Ukraine in 2019. More than four in 10 (41%) Egyptians in 2021 reported lacking money for food at some point in the last 12 months. This measure was on the higher end of Gallup’s trend for the issue but lower than the record-high 48% of Egyptians that said so in 2016,” notes Gallup.

“Egypt’s economy was initially hit hard by the COVID-19 pandemic, but it could still register positive growth for 2020 and 2021. However, inflation has been up in the country, and further increases in food prices related to Russia’s invasion of Ukraine may erase the modest gains the Egyptian economy has made,” the report continued.

All said, the shortage of grain caused by the Russia-Ukraine war is likely to be a boon for American grain farmers, according to Breitbart News which reported over the weekend that China intends to buy more from the U.S. amid the coming global grain deficit.

The outlet reported that China came up around $6 billion short of the $40 billion in U.S. agricultural products Beijing agreed to buy in a two-year trade deal signed in January 2020, just ahead of the COVID-19 pandemic. However, China has suddenly begun to make up some of the deficit as buyers from the ChiCom regime scrambled this past week to cover likely shortfalls in Ukrainian grain and corn production.

Citing a report in the South China Morning Post, the outlet noted that “China booked ten shipments of American corn recently, plus 20 shipments of U.S. soybeans to make up for shortfalls from Brazil. The deals were evidently not meant to become public knowledge because they were disclosed to the SCMP by traders who asked to remain anonymous.”

“Food security is a critical priority for Beijing as the nation’s imports of corn, soybeans and wheat have soared to record levels, increasing its vulnerability to trade tensions and supply shocks. Top officials have issued orders to ensure commodity supplies, sparked by concerns over Black Sea trade disruptions,” the SCMP added.

Starvation combined with domestic unrest is a powder keg waiting for a spark. The world has become far less safe with Joe Biden at the helm.

*NEW* BREAKING: Biden ADMITS He Raised The Gas Prices ON PURPOSE So He Can Do This [VIDEO]
America's Freedom Fighters

Father of Fallen Police Officer Goes to Battle After HOA Demands He Remove Tribute to His Son
May 23rd, 2022 Flag And Cross