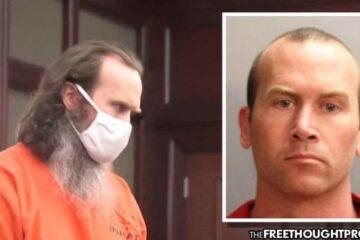 Jacksonville, FL — It was a dramatic day in a Jacksonville courtroom this week as multiple child victims spoke out at disgraced officer, Matthew Butler’s sentencing hearing. After facing a slew of charges related to the sexual assault of multiple children under the age of 10, Butler pleaded guilty to just three charges. However, they were so horrific, that he received two decades in a cage.

According to the State Attorney’s Office, the child-raping cop pleaded guilty to two counts of attempted capital sexual battery involving two separate survivors. A third charge involving a third survivor was resolved and incorporated into the plea agreement.

His victims took to the stand in the tear-filled courtroom to recount the horror this “monster” has caused them.

One of Butler’s victims, now just 15, took to the stand and told the courtroom how this man’s abuse has ruined her life but she stays alive just to make sure he pays.

“Every time I think I am past it, a sound or something I see makes it all come back to the day it happened,” the first survivor to speak said. “I feel humiliated and worthless thinking about what happened. It’s a struggle to get out of bed every morning because I wish I could just disappear, and all of this would just go away.”

Another victim told the courtroom that she now sees Butler’s face in men on the street causing her a life of suffering.

“Every day since you took my childhood from me at the age of 8, you Matthew Butler made it impossible for me to walk down the road at night,” she said. “When I go anywhere and I see someone who is bald and looks as evil as you, all I remember is you Matthew, your mugshot. Your mugshot is imprinted in my brain, imprinted in my brain so bad I hurt myself because of you.”

The child victim said that making sure Butler ended up in prison was the reason she’s made it through all these years.

“But then I stop and remember I have to stay alive for this day to get justice not just for me but for every single girl in this courtroom,” the 15-year-old survivor said.

Naturally, despite Butler pleading guilty, his attorney maintains his innocence, claiming Butler doesn’t remember any of it.

“He has absolutely no recollection of any of these events ever happening,” attorney Mitch Stone said. This statement rings hollow given the fact that nude photos of the victim were found on his phone.

“He wasn’t even shedding a tear. It looked like he didn’t even change his whole facial expression. There was plenty of victims standing up there crying on the stand, or crying in the seats, and not one facial expression changed, which shows that he is a predator,” she said. “He is a monster, and he obviously doesn’t care what he did to those girls.”

TRENDING: Texas Church Hero, Jack Wilson, On Bloomberg: ‘If We Did Things His Way, Many More Would Be Dead’

Butler was a nine-year JSO veteran when he was arrested in March 2019. He was being held without bond when another victim came forward in 2020.

“One thing about children is when there is consistent history being given to investigators by more than one person and those stories line up, it’s hard to dispute what they’re saying,” Ken Jefferson, a former sex crimes investigator at JSO told News4jax.

According to the 15-year-old girl, there could be more victims and she urged them to come forward in the courtroom on Wednesday.