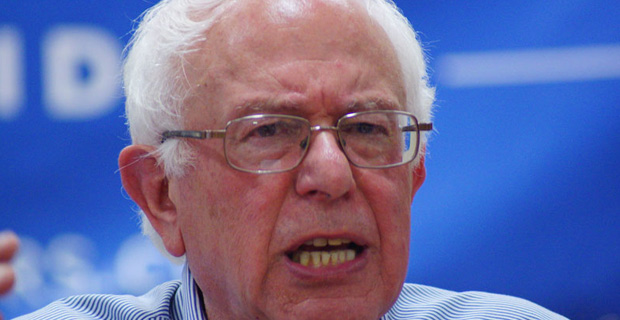 At CNN’s recent climate change town hall, a member of the audience told Sen. Bernie Sanders that the planet cannot sustain much more population growth and urged him to take action.

“Human population growth has more than doubled in the last 50 years,” Martha Readoff, a teacher, told Sanders. “Would you be courageous enough to discuss this issue and make it a key feature of a plan to address climate catastrophe?”

Sanders said yes, citing Mexico City’s prohibition on federal funding for nongovernmental organizations that promote or perform abortion as a method of family planning in other nations. The remark, connecting abortion with population control, caused an uproar. (It should be noted that Sanders did not mention or advocate coerced family planning.)

These concerns about population are not new, of course. In his famous scholarly work “An Essay on the Principle of Population in 1798,” the English scholar Thomas Malthus wrote, “The power of population is indefinitely greater than the power in the earth to produce subsistence for man.”

The population at the time had not yet reached a billion. To be fair to Malthus, the world did eventually experience a population explosion in the 20th century—reaching 1.6 billion in 1900 and 3 billion in 1960⁠—but it was accompanied by an unprecedented surge in wealth, knowledge, and prosperity.

As Sean Malone explains in a FEE video:

Global population is now seven times where it was when Malthus wrote his essay, and yet in the last 30 years alone, we have cut extreme poverty in half. Fewer people are dying today of starvation than ever. Per capita income is higher, child labor is down. It turns out the main problem was never that the world was “overpopulated,” but that its people were never free enough to create wealth, and when they did create something valuable they weren’t allowed to keep it.

These considerations will not close the door on population debates, of course. However, contemporary debates often overlook an important fact: global population growth is already declining, and rather rapidly.

Ms. Readoff is not wrong that the population has doubled over the last 50 years. In 1969 the global population was 3.61 billion. Today it’s 7.7 billion. However, data show the annual population growth peaked in 1962 at 2.2 percent. Since that time, it’s been in steady decline, with the exception of modest spikes in the late 1970s and early 1980s.

As of 2019, annual population growth stands at 1.1 percent, half of what it was in 1962. But the story doesn’t end there. The United Nations and US Census Bureau project this decline in population growth to continue.

Our World Data has a graph depicting the decline (see below). 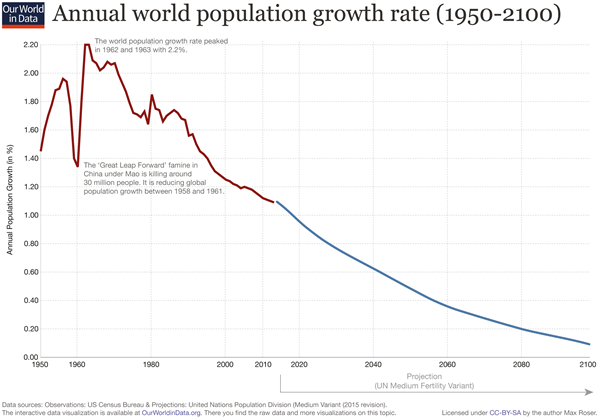 This data is likely pleasing to modern Malthusians who see scarcity and CO2 emissions as the primary obstacles to sustainability. However, declining fertility rates do have a downside, as China’s recent experience demonstrates.

Central planners in China, channeling their own inner-Malthus, implemented three decades of state-enforced family planning. The country’s “one-child policy,” implemented in 1979 after a decade-long two-child policy, wasn’t just the most infamous and inhumane example of population planning. It was socially destructive.

Because of the cultural significance of having a male child, China’s policy had the result of encouraging mass female infanticide, resulting in a gender imbalance. Because of its one-child policy, China, which today has a population of 1.386 billion, is projecting a smaller population by mid-century—and a decline in the workforce of as many 200 million people. By 2050 China will have 330 million people over the age of 65, which will further stress China’s already overburdened health care system.

Facing what has been described as a “demographic time bomb”—an aging population and falling birth rates—China in 2015 eliminated its single one-child policy and reversed course. Realizing the demographic challenges it faced, government officials unleashed what The New York Times described as “a propaganda blitz on women it considers to be gao suzhi, or of ‘high quality.’”

“Make sure you don’t miss out on women’s best years for getting pregnant!” warn state media headlines.

Such attempts by central planners to control human behavior will likely be in vain, experts say.

“China should have stopped the policy 28 years ago,” Yi Fuxian, a senior scientist at the University of Wisconsin in Madison, told The Guardian in March. “Now it’s too late.”

Developed nations with their own aging workforces should remember that human beings are not a bane to our planet but its greatest resource, especially when given the freedom to create and innovate.