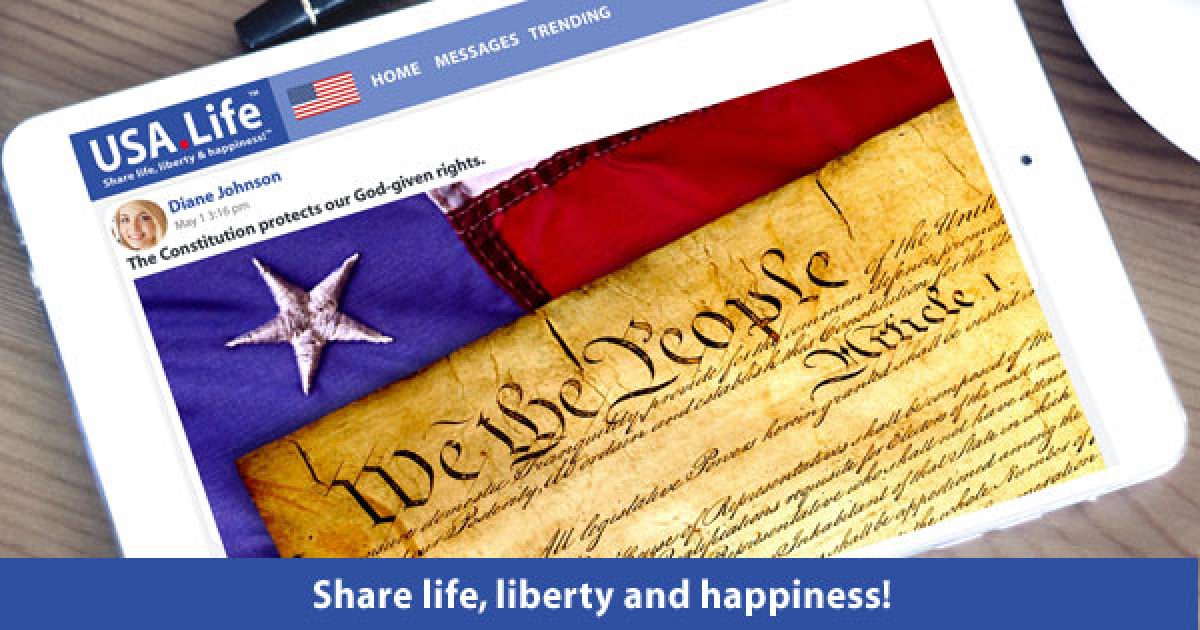 Back in May of 2018, I reported on a conservative, Christian man named Steven Andrew from Silicon Valley, who was fed up with the Nazi-style censorship of Facebook and was going to start his own social media website, USA.Life. Steven started a crowdfunding campaign at the time so that he would have the resources to not only launch the project, but maintain it and this past week, he did a soft launch of the social media platform, which he claims is “designed for Americanism, not globalism.”

So far, I’ve set up on the site with pages and groups, just like Facebook and other social media sites of which I’m a part.

Other than Minds.com, USA.Life is the only site I have not had any trouble posting to or running into glitches. The site is steadily growing as I can tell from the reach I’m getting.

I have found the site to be responsive far faster than Facebook or any of the other social media platforms that I’m using. Granted, that could be due to the amount of participants that Facebook has, but they are constantly adding code which also bogs down my computer. USA.Life isn’t doing any of that. I can have several of their pages open at the same time with quick response.

Andrew spoke out against the onslaught against conservative news that was branded as “fake news” in 2018.

After Steven Andrew had nearly 70 million people blocked from his posts by Facebook, he decided to use it as a positive thing and begin a brand new social media page, and the name of the new venture might be catchy to some, USA.Life.

Andrew said, “Facebook lied to Congress and America” during Mark Zuckerberg’s testimony before Congress in April.

Zuckerberg told Senator Ted Cruz (R-TX), “We consider Facebook to be a platform for all ideas.”

“Facebook blocks more than 98% of my reach,” said Andrew. “That means 4.9 million people per month are missing. Facebook increased censorship after President Trump was elected.”

Instead of communicating to 5 million people per month as in 2016, Facebook showed Andrew’s posts to 97,685 people last month. Andrew has almost half a million followers.

“Facebook’s censorship caused millions of fewer people to follow God and strengthen their families, a financial loss of donations likely in the millions of dollars and a reduction in communicating with millions of more people by email and our website,” he said. “Facebook is anti-American, since they censor those who believe like the founders.”

In promoting the site, Andrew writes:

What if you could go from censorship to freedom? Imagine getting honest, real news instead of fake news. How secure would you feel knowing you can keep your privacy online?

You won’t be censored at USA.Life social network for believing like our founding fathers and supporting President Trump. After all, we know American beliefs are what make you safe, strong and blessed!

USA.Life is for all people who love America!

With USA.Life, you can discuss important issues that are censored elsewhere – such as life, the Second Amendment, border security, traditional marriage and liberty!

Our mission is to give you the most powerful social networking tools, privacy and real news. For too long, companies such as Facebook, Google and Twitter have used their bias to block people from getting true information. At USA.Life, we are the new alternative to social media that is biased in a positive way – toward the freedom and truth about the greatness of America and our people.

And members from all over the world have signed up for free accounts.

He then adds a very important aspect to social media, something that we have reported on before and that is the issue of privacy, something you simply won’t get with Facebook, Google, Twitter or YouTube.

We believe in liberty in our heart, so we don’t spy on you.

You deserve privacy! When you delete your information, we delete it. This is America!

According to Andrew, USA.Life is “designed for Americanism, not globalism.”

The platform allows you to fund it, so it truly is in the hands of the people. If it’s a success, it’s due to users, not anti-Americans and those who hate freedom or Marxists.

There are a variety of levels that you can choose from to help fund this important projectand it doesn’t take billions and billions for it to work.

Andrew also shows you where he is putting the money.

I can say from experience that in my brief time with USA.Life, Steven has even gone out of his way to help me on a personal level. I’m not very marketing savvy when it comes to these kinds of things, but he has reached out to me to help me be successful there.

Additionally, he isn’t stopping there. He’s also developing an alternative to Google called 1776Free, which he refers to as the “Pro-America search engine.”

Andrew told me via phone

that he is working with a small team and that they are committed to providing good customer service and a good product for people to use. Additionally, he pointed to the fact that while they didn’t meet their crowdfunding goal at first, they did put out the best product they could for the money and are looking to increase quality as funding becomes available.

Mr. Andrew also said that they are “cash positive” and don’t have any debt.

The company is also developing an app for the platform, which should help it grow exponentially.

To bring the USA.Life social network to the next level, with apps, smart recommendations, and expanded capabilities to provide an even stronger alternative to Facebook, Andrew is raising $190,000.

“Freedom and privacy could be lost forever without USA.Life. However, we can further save the Internet if 19,000 people give $10, or if 1,900 people give $100 today. If people want privacy, it is at USA.Life,” Andrew said.

As with any of these ventures in freedom to fight against the giants, there is always pushback and Andrew and his team have faced that, but believe that they will be successful with God’s help, and yours.

And lest you think Steven is part of a “fly-by-night” outfight, according to a statement,“Steven Andrew is a Silicon Valley technology and Christian leader, who loves America. What makes him unique is he passionately believes like our founding fathers that God gives us liberty. He has extensive business and technical leadership experience to the Fortune 500 and start ups, including for Cisco, Stanford, Sega and Better Homes and Gardens, where he has successfully led multi-million dollar initiatives.