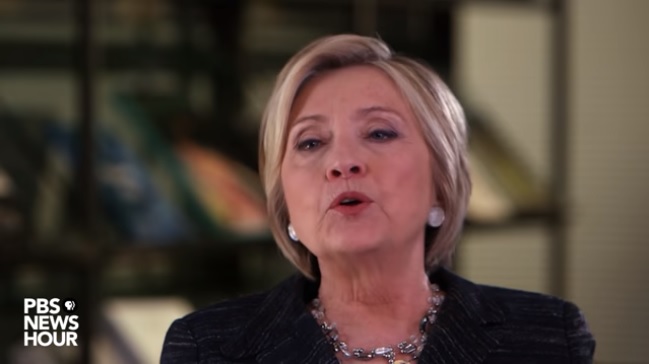 There are rare things in this world.

Waterfalls in the desert. Sunny days in Seattle. And something like a moment of honesty from Hillary Clinton. It’s very partial, but still entirely implausible.

Hillary Clinton said Tuesday that civility in America can only begin again if Democrats win back the House or Senate this fall.

We won’t be civil to you… until we take over.

At least Hillary comes close to admitting that this is about power. And that the Democrats will do destroy any public norms to get it.

“You cannot be civil with a political party that wants to destroy what you stand for, what you care about,” Clinton said in an interview with CNN’s Christiane Amanpour. “That’s why I believe, if we are fortunate enough to win back the House and or the Senate, that’s when civility can start again. But until then, the only thing that the Republicans seem to recognize and respect is strength.”

All Republicans seem to respect is strength?

Who wore it best, Mussolini or Hillary?

“There can be no democratic norms, until we take power. But we’re only doing it because strength is the only thing the other side understands,” every tyrant ever.

“I remember what they did to me for 25 years — the falsehoods, the lies, which unfortunately people believe because the Republicans have put a lot of time, money, and effort in promoting them,” Clinton said.

The Republicans have even managed to shamelessly convince folks that Hillary Clinton didn’t bring peace to Northern Ireland, try to join NASA or land under fire at an airport.

Or get named after Sir Edmund Hilary.

All these Republican lies are a serious problem. Like the time Republicans tried to convince people that Chelsea Clinton wasn’t jogging around the World Trade Center on 9/11.

“So when you’re dealing with an ideological party that is driven by the lust for power, that is funded by corporate interests…”

Projection is a sad and unmerciful disease.

Clinton said. “I want to stop the degrading of the rule of law. The delegitimizing of elections.”

She said while delegitimizing the election that she lost.