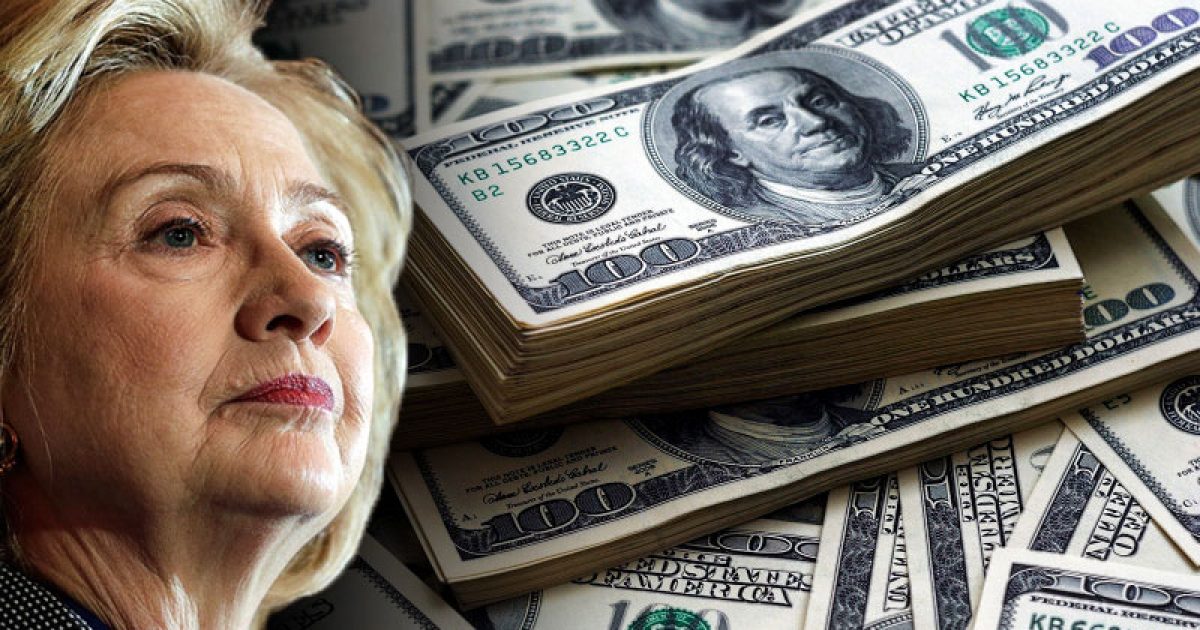 While President Donald Trump “hints” that he “might” seek prosecution against former Secretary of State Hillary Clinton (yeah, right), Clinton has been free to do as she likes, and her latest dealings are in her political front group giving Democrats $95,000 for the 2018 midterms.

In a recent report by new fabrication outlet CNN, we’re told of her donations:

Hillary Clinton is getting more involved in the 2018 midterms.

Clinton, through her political organization Onward Together, donated the maximum of $5,000 to 19 Democratic House candidates and four secretary of state candidates in June, according to the group’s filings with the Federal Election Commission. The donations represent the most concentrated midterm effort the former Democratic presidential nominee has made to date.

No doubt, she’s going to do even more.

However, Onward Together has been pulling in money from donors for a while now. In September 2017, it was reported that following making her political group known to the public in May, they basically have had nothing to show for the money that was donated.

When Clinton went public with her group on May 15 she said the group would be partnering with five left-wing political groups: Indivisible, Swing Left, Color of Change, Emerge America and Run for Something.

But four months later, it’s unclear what the group’s donors have to show for their money. Onward Together’s website still has just two tabs: one explaining the group’s mission and one asking supporters for donations.

An email signed by Clinton asking supporters for money last week excused her group’s lack of action. “You may not have heard much about the work we’re doing at Onward Together,” Clinton wrote. “That’s because we’re working behind the scene to fund, support, and amplify the work of the groups we’re supporting. We’re not the story: they are.” She closed the email by asking supporters to commit to a recurring monthly donation.

Onward Together is said they would be partnering with five political groups: Indivisible, Swing Left, Color of Change, Emerge America and Run for Something.

When the Daily Caller attempted to find out if any of the groups had received any funding from Onward Together, only the George Soros-funded “Indivisible” responded to write, ““Onward Together has not given any financial support to us.”

What’s concerning is that no one can know who is donating to these groups unless the person chooses to reveal it because Onward Together has absolutely no intention on making those revelations because they are a 501(c)4 “social welfare” organization and is not required to reveal who its donors are.

We know that when Clinton started up Onward Together, she put just under a million dollars into it, and presumably, that was to organize as “part of the resistance” against President Trump.

Sadly, some donors are having a hard time canceling monthly donations to Onward Together. The Seattle Times reports on a young Clinton voter who was so upset that he could not cancel a $10.48 donation every month to Onward Together, that he ended up having to file a complaint with the Attorney General in his state.

Corey Koscielniak admits that $10.48 is “a really small amount” over which to get frustrated.

But Koscielniak’s decision to cancel a recurring monthly donation of that sum to Hillary Clinton’s nonprofit organization Onward Together turned into an odyssey that’s lasted several weeks.

The organization’s webpage didn’t allow him to cancel, and a phone call to the group didn’t seem to resolve things. The situation prompted Koscielniak to file a complaint with the Washington state Attorney General’s Office.

The experience also gave the 29-year-old Clinton voter a brush with the opaque world of nonprofit, quasi-political organizations that disclose little about their operations.

As for the trouble to cancel his donation and lack of disclosure, “I don’t expect it from anyone, corporation or not,” said Koscielniak, who added that he doesn’t have a chip on his shoulder about Clinton herself.

“But what surprised me is, the Democratic Party is supposed to stand for other people and not be part of this larger industrial complex,” he added.

Welcome to reality Corey, why haven’t you noticed this before now? It’s been going on for decades. The Democrat Party has not been standing up for the people anymore than the establishment Republicans have. They have only been looking after themselves and the interests of their handlers.

Hinting at prosecuting Hillary Clinton is not what is needed. Promising to investigate and prosecute her is not what is needed. President Trump promised resolve on the campaign trail about going after her and he looked America in the eye and promised such action. However, as soon as he was elected, he was falling all over himself to tell us what a debt of gratitude we owed “Crooked Hillary,” and how Bill and Hillary were good people, and how he didn’t want to hurt them.

Well, how about the American people who have been hurt by her and those around her, Mr. President? Because of Trump’s inaction, this woman continues to fund the domestic enemies of America.

When will there be an end to “hinting” and a start to justice?