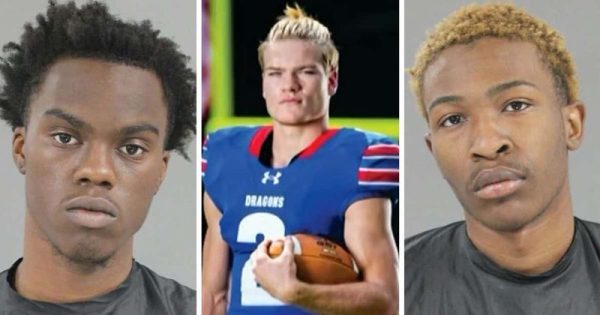 His family can forgive the black killers all they want too, but it won’t change one simple fact: Elijah DeWitt, an 18-year white high school football star, was brutally murdered by two blacks males in the suburbs of Atlanta. Police still have no motive, meaning DeWitt’s murder probably has a racial angle. [Georgia high school football star, 18, is shot dead in mall parking lot while on a date with his girlfriend: Two teenagers, aged 18 and 19, are arrested as cops investigate motive, Daily Mail, October 9, 2022]:

Two teenage boys have been arrested for shooting dead a Georgia high school football star in a mall parking lot while he was on a date with his girlfriend.

Elijah DeWitt, 18, was shot dead in the parking lot of a Dave & Buster’s outside of the Sugarloaf Mills Mall in Lawrenceville on October 5 following an altercation with two others.

Police arrested Kemare Bryan, 18, and Chandler Richardson, 19, in South Carolina two days later. The two are both from Lawrenceville.

‘Detectives are still working to investigate the motive behind this incident, it appears that the suspects and the victim were familiar with each other and when they encountered each other in the parking lot, an altercation took place and then the shooting,’ Gwinnett Police Department said in a statement.

DeWitt was on a date with his girlfriend, Bailey Reidling, at the time of his death. In a 911 emergency call, Reidling can be heard screaming in the background.

‘I was at Dave & Buster’s, I heard people screaming, I look towards my right, and I see someone lay down,’ a person said in a 911 call obtained by Fox News. ‘I’ve never seen anything like this, man.’

Bryan and Richardson were charged with malice and felony murder. The two were also charged with possession of a firearm and aggravated assault

The duo will be extradited from Anderson County to Gwinnett County on October 10.

A candlelight vigil for DeWitt was held on Sunday evening as nearly a hundred people gathered to honor the Jefferson High School student.

Erwitt told 11Alive News that her son was dedicated to football and strived to be number one.

‘He loved football, he was ready and willing to do whatever it takes to go D1, that was his ultimate goal.’

Despite losing their son, Dawn and her husband Craig have forgiven his alleged killers.

Forgiveness is for the forgiver,’ Craig told Fox news. ‘We don’t want the hate in this household.’

Elijah died on his father’s birthday, according to 11Alive News.

Reidling mourned her boyfriend of more than four years in a heartfelt tribute days after he died in front of her.

‘They say you aren’t suppose to question God – but damn,’ Reidling wrote. I never thought I would be having to write this. Baby, I know you couldn’t help what happened but damn why’d you leave me.

‘We had so much planned & so much to look forward to, I just don’t understand. I don’t think I will ever understand. None of this is real to me yet, so I feel like I’m stuck.’

She concluded: ‘Elijah was a light, he wasn’t a man of many words but every room he walked into he made his presence. He made me a stronger person. he made me want to be better. He made me proud as hell to be his girlfriend.’

Reidling later said that Elijah would want everyone to accept his death and move on.

Salt of the earth, the type of person you want not just as a neighbor, but as a member of your community. You might not know his name, but you’d always wave and say hello when you saw him.

His name is Elijah DeWitt, an 18-year white high school football player brutally murdered by two black males. As he lay dying, his last words to his longtime girlfriend were “help.”

Say his name. Remember how he lived and what type of life was taken from this 18-year-old white male. Also remember how his life was violently ended by two black males and the resounding silence from the mainstream media (MSM) dedicated to the idea systemic inequality, implicit bias, and white privilege predominates all of society.

Were these actual facts and the basis for how our civilization existed, we’d all know Elijah DeWitt was a white 18-year-old male murdered by two blacks males.