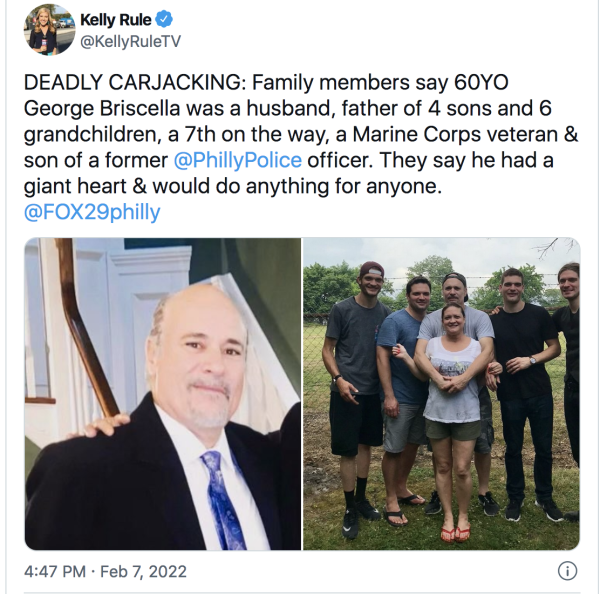 In 2021 Philadelphia, 95 percent of the shooting victims were non-white. The 2020 Census shows Philadelphia to be a 34 percent white city.

Unfortunately, George Briscella, a 60-year-old white man – a father of four and grandfather of six – found out the hard way what this means. While visiting his mother in a nearly 65 percent white community within Philadelphia, Briscella would be the fatal victim of a car-jacking.

Or what the police dubbed a “crime of opportunity.” The aggressors were three black males. [‘This didn’t need to happen’: Grandfather, military vet killed in Philadelphia carjacking, Fox 29, February 7, 2022]:

PHILADELPHIA- A Philadelphia grandfather and military veteran was gunned down Sunday night during a carjacking outside his mother’s house in Rhawnhurst.

According to the Philadelphia Police Department, 60-year-old George Briscella was visiting his mother at her house on the 2100 block of Afton Street around 8 p.m.

Video surveillance footage shows Briscella walking towards a 2020 Toyota Rav4 parked in the driveway when three unknown suspects approach him a minute later.

Soon after, police say three shots were fired from an AR-15 style rifle and one hit Briscella on the right side of the abdomen. He was taken to Jefferson-Torresdale Hospital where he died.

The Rav4 was last spotted heading towards Large Street and has a temporary license plate tag of last 514-67PD.

Investigators believe the three suspects could be linked to other carjackings.

“This didn’t need to happen in a city that we all grew up in and loved, and it continues to deteriorate.”

Why does it deteriorate? Because the civilization white people built in Philadelphia is being replaced by the conditions non-whites uniquely create in a space once inhabited by whites. What long ago white people created – the infrastructure of the city – remains, but the quality of life white individuals collectively created is replaced by what they decided to escape via white flight.

Recall, 95 percent of shooting victims in 2021 Philadelphia were non-white. Odds are 98 percent (or greater) of the suspects were non-white, too.

His Name is George Briscella.